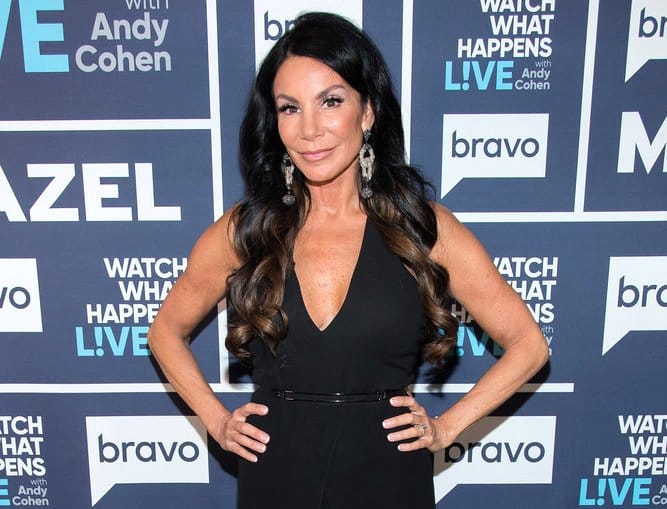 Real Housewives of New Jersey star Danielle Staub is making some rather shocking claims in an all new interview.

The Bravo reality star, who returned to the RHONJ this season following years off the show, reveals she and her daughters were bullied by former castmate Caroline Manzo and her family. In fact things got so bad according to Danielle, that she and her kids were forced to move.

Speaking to Amy Phillips on the Reality Checked podcast, Danielle, 55, was asked what things were like behind the scenes during her time on the RHONJ. She appeared on the first two seasons of the show and was in a feud with her castmates back then including Teresa Giudice and Caroline.

“Well there was everything from bullying my children behind the scenes,” said Danielle. “Remember there were 11 of the Lauritas and Caroline is a Laurita. And all of them had children as well.”

Danielle then revealed that the Manzos even had a hand in her home being vandalized.

“Behind the scenes there were these bus tours going on, and they would stop in front of all the places that we would shoot but no one else’s home except for mine,” she shared. “And they would unload this bus, and I didn’t know who was running the tours. But I found out later that the Manzos were involved with that. And they got out and they came all into my backyard. There were about 30 people, strangers in my backyard as if they were welcome there. And that night my house got busted into. The front doors, the massive front doors ruined, plowed down with one of those police things that you open doors with. I think it’s called ramming the door.”

Danielle’s story however takes a turn for the skeptical when she says they destroyed her home security equipment which was worth six figures!

She stated, “And then $140,000 in security cameras ripped off the walls. Whore, prostitution whore written all over the walls with spray paint.”

Unfortunately for Danielle, this experience forced her to move her kids out of that home and neighborhood.

“My kids were terrified, we couldn’t stay there,” revealed Danielle. “Nothing was stolen. So this was just an act of hate. And actually telling me to leave. So we did. My daughters and I left and never looked back at the house. The house that grew up in and the only home they ever knew. But you know what don’t be sad cause I started over and I pulled myself up.”

Must say Danielle’s story sounded believable until she mentioned she had $140,000 worth of home security cameras installed. Perhaps times have changed but I’m simply not aware of any type of home security equipment that would cost that much. They typically cost hundreds or thousands, perhaps tens of thousands for the mega rich with huge mansions. But you can be the judge on whether or not Danielle’s being honest.

A new episode of the RHONJ airs tonight on Bravo at 9/8c.

TELL US – DO YOU BELIEVE DANIELLE’S CLAIMS ABOUT THE MANZOS?