The Real Housewives of Atlanta Recap: Rock the Boat 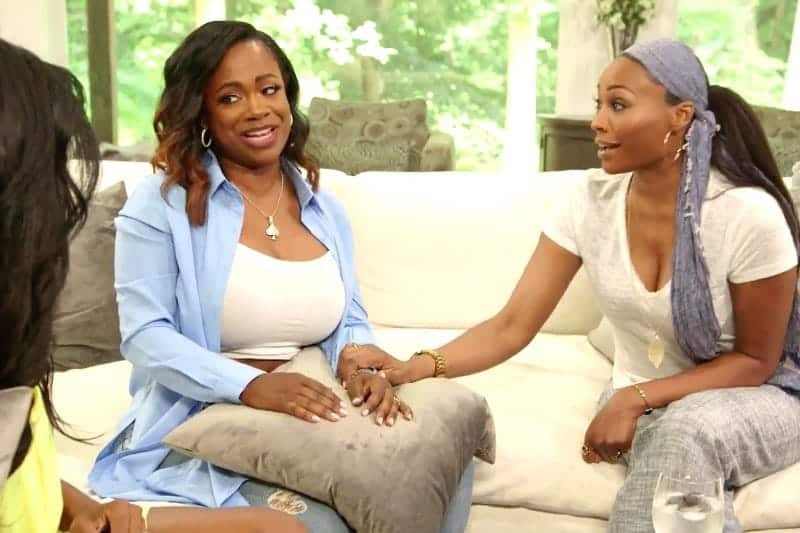 Well, last night’s episode of the Real Housewives of Atlanta wasn’t exactly chock full of drama. Halfway through the season, and it just seems like the ladies have lost some steam. I suppose, we can’t really blame them. They’re probably exhausted. That trip to San Francisco was pretty eventful. Last night, however, we barely even saw them interact with each other. Instead, we were treated to a glimpse into each of the ladies’ personal and family lives.

Not Kenya’s, of course, she’s still keeping that “husband” of hers under lock and key. You’d think the man were an international spy, the way she avoids speaking his name or showing his picture. Cynthia, finally asked Kenya why she still hadn’t even met her husband. Kenya assured her that she wasn’t hiding him, and that they would meet “soon”. We’ll see, Kenya, we’ll see. Speaking of husbands, Cynthia had a brief  and bittersweet  reunion with her ex, Peter.  Cynthia still has a 25% interest in Peter’s bar, and the two met to discuss the new location.

Peter complimented Cynthia on how youthful and beautiful she looked. Cynthia said “Uncle Ben” was looking pretty steamy. The two also admitted to following each other on social media. It was clear these two still have love for each other, and always will, but are probably better off as friends. They’ve both moved on. Cynthia is still seeing Will, and while she’s taking it slow, she enjoys his company, and is really starting to like him. Cynthia must be fairly serious about Will because she not only mentioned him to Peter, she asked the couples of the group to join them for a boat ride.

NeNe and Greg were in LA, and weren’t able to make it. Kenya’s husband must have still been in New York because they begged off, as well.  That left Kandi and Todd, who were both a little apprehensive about this new man in Cynthia’s life.

Kandi and Todd are still very close with Peter, and felt awkward spending time with Cynthia and her date. Kandi also wanted to make sure Will was “thoroughly vetted” before she gave her approval. Always the mother hen of the group, and never one to mince words, Kandi wasted no time interrogating Will.

Kandi did her research, and found out that Will had appeared on an episode of “Steve Harvey show” about dating, and that he had filmed a pilot for a dating reality show. Kandi was very concerned that his interest in Cynthia was more about getting his fifteen minutes of fame than true love.

Will assured Kandi that his interest in Cynthia was genuine, and while he had thought about doing the reality show, he’d changed his mind, and never filmed it. Kandi decided that Will was a really good guy, but cautioned Cynthia to take things slowly.

We also saw Kandi spending time with her own family. Her two children are growing up quickly, and she lamented the time she had to spend away from them.

Sheree’s children are growing up, as well. In fact, her youngest daughter, Kaleigh, is headed off to Washington DC to attend Howard University. On the occasion of her daughter’s last night at home, Sheree decided that she would finally have the difficult, and long awaited talk with all three of her children, about the abuse she suffered while married to their father, Bob Whitfield.

Sheree told her kids that she realized that they’d probably read some of the details online, but wanted to know how they were feeling.  Sheree’s children told her that they loved her, and that, to them, she was superwoman..strong, confident, and always there for them. It was really sweet, and it was clear that Sheree was relieved to have their support.

We also learned a little more about Sheree’s “bae”, Tyrone, who is currently serving time in prison. I know, this seems very out of character for Sheree, but she said that they’re “soul mates”, and that he “makes her happier than any other man has”.

Apparently there were even some rumors going around that Sheree and Tyrone had secretly tied the knot. Porsha asked Sheree about it while they were shopping, and Sheree assured her that she was not married, but that she’d consider it when he got out.

Sheree even confided in her life coach, Jack Daniels about her new relationship. Jack Daniels wondered if this relationship was a fantasy on Sheree’s part. She insisted that it was very real. When he expressed concern that Sheree dating a convict must surely be fodder for all manner of catty comments from the other ladies, she told him that she didn’t care about what anyone had to say.

Sheree said that when they  saw them together, “everybody was going to want to get them a man in prison” Um…I’m not sure about that, but I guess we’ll find out in 1-4 years.

Porsha also had love on the brain last night. She’s been divorced for almost five years, and broke off a relationship shortly after last season ended. Porsha decided it was time to step out of her comfort zone, and to that end, she hired a matchmaking firm to set her up on a date.

When the matchmakers met with Porsha at her home, she told them that she was looking for a man who was supportive, successful, and wanted a family. Porsha REALLY wants children, specifically twins, more specifically, a boy and a girl, and no one can accuse her of being unprepared.

When she gave the women a tour of her home, we saw that Porsha already has bedrooms, complete with furniture, clothing, and supplies, as well as a backyard playground set, all ready and waiting for her future children. Doesn’t this sound like something any guy would love to see in his date’s home?! There’s nothing at all crazy about buying toys and clothes, and setting up swing sets for children you don’t yet have.

The matchmakers told Porsha that the bedrooms and equipment may be a little intimidating, and that she should not let prospective dates see it. Porsha agreed that she would go on a totally blind date. She said that looks were not that important to her, and that she was “down with the swirl”, meaning she would open to interracial dating.

Porsha met her date at a Japanese restaurant, and let him know right away that she was less than impressed. Ok, admittedly, the guy was a bit plain, but Porsha was downright rude to him! She entered the restaurant, and upon seeing him, walked out to “collect herself”, before walking over to the table, and announcing that she could only stay for about half an hour, because her mother needed her.

The two had a shot of Saki, and Porsha’s date said he hoped it would loosen her up a bit, but it didn’t quite work out that way.  Porsha’s phone “kept ringing”’with calls “from her mom”, and Porsha took off to go “take care of her”.

Poor guy! Everyone can’t be Bradley Cooper. Maybe he was nice. Maybe he would make a wonderful father. I guess we’ll never know. Am I awful for hoping that Porsha finds out in a later episode that this less-than-beautiful, bald man is the inventor of the USB cord, or the sole heir to the Altoids fortune, and is secretly worth BILLIONS?!  That would serve her right.

NeNe and Kim were completely absent from last night’s episode, which may explain why the drama was, as well.

We won’t be seeing our favorite southern belles for three weeks, while the show is on hiatus for the holidays, but here’s hoping the new year brings an interesting twist…they could really use it.

TELL US – WHAT ARE YOUR THOUGHTS ON THE RHOA RECAP AND LATEST EPISODE?