Vanderpump Rules Recap: Back in the Saddle 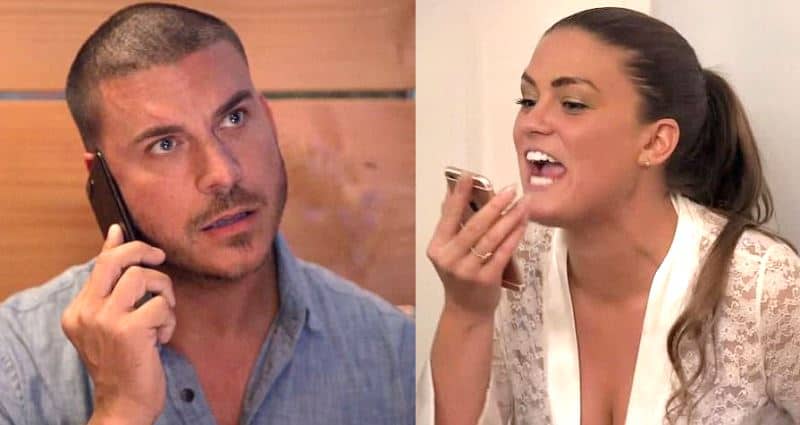 The drama continues to get juicier and the issues get bigger during this week’s episode of Vanderpump Rules.

Stassi and Brittany, the WEIRDEST duo ever, head out for a “hungover spa day” to get Brittany’s mind off of her ‘would have been’ two year anniversary with Jax. Brittany chooses not to cancel her spa day she originally planned to have spent with Jax and invites Stassi instead, since she, too, has experienced the dirty, sleazy ways of Jax Taylor. Brittany is still unsure of everything and spills that she slept with Jax the night before. Woopsie. Luckily, Stassi understands “hate/love sex” and completely comprehends how this could have happened.

Sandoval, James, and Jax meet up for some drinks to get JAX’s mind off of his ‘would have been’ two year anniversary. Jax states “he wishes Brittany would just hook up with someone to make things even.” WHAT kind of reasoning is that?! Jax overshares that this whole situation makes Brittany “hornier than ever.” Gross. The guys then get into a girly TMI sesh where Tom shares he is having a dry spell with Ariana. Maybe she is finally realizing that Tom likes hair product more than he likes her. Who knows?
Meanwhile, Schwartzie rolls up to Pump with flowers and a balloon to apologize to Fairy-God Lisa. Lisa lets him know that HE doesn’t need to do the apologizing, but rather hot-headed Sandoval. Schwartz explains he is trying to “moisturize” the current situation, but it ain’t gonna cut it for Lisa. She wants these dopes to realize just how big of a deal this opportunity is for the Toms. In other words, she wants them to GROW UP.

The never-planned-an-event-before-event-planner-Stassi gets the opportunity to finalize a party for Lisa. Must be nice to have someone like her in your life. Oh the opportunities! Even Scheana realizes the ridiculousness of the whole situation. Why IS Stassi getting to be the boss lady? Lisa has high hopes that THIS will help Stassi mature. Don’t hold your breath, girlfriend.

Over at Katie and Schwartz’s place, Katie explains that there is going to be a girls night party to keep Brittany’s spirits high. Full disclosure, the girl’s spirits are juuuuuust fine, considering she is sleeping with Jax multiple times a day. Sandoval comes on over to vent to Schwartzie about Tom-Tom and the guys are FINALLY taking “initiative.” Katie says that Schwartzie can bring the “quirk,” Sandoval can bring the “flirt,” and Ken and Lisa can bring the “class.” Solid business plan, Katie. People may actually start liking you now!

Brittany comes to meet Ariana over at the stables where Ariana talks about her love of riding. She looks totally professional practicing on Walter, until Walter throws her off, which makes Ariana super nervous that Walter may get spooked during her upcoming competition. I feel like the only reason this segment was included in the episode was for the metaphorical aspect of “if I get knocked off of the horse, I’m gonna get back up again.” Listen to the signs, Brittany. Perhaps it’s too soon to give up on Jax completely! Are you suuure you don’t wanna get back up on that saddle? See what I did there?

James explains that he and Racquel and like ying and yang, a perfect combo of personalities. He smokes weed—she pets dogs. Ah, if only all relationships could be as easy as that! Speaking of relationships, maybe you’re having a dry spell because you continuously wear that PANAMA JACK hat, Sandoval. Maybe try a new look. Maybe burn the hat. Just a suggestion. Hat or no hat, Sandoval does come to support his GF and brings Ariana’s brother along to cheer her on. He can’t help himself and spills to Ariana’s brother about their dry spell. Holy awkward. Her bro tries to change the subject and refocuses the attention back onto the horse competition. Ariana’s first place ribbon turns Sandoval on big time. Ya know. Save a horse. Ride a bartender. Woof.

I’m confused. It’s as if Brittany is playing the “I’ve been cheated on” card to get a party in her honor. She sits there chatting with Jax and sleeping with Jax, while the other girls are making her fav foods (hello BEER CHEESE) and doing everything to perk her up. Brittany is living a dual life and I am calling her out. The girls are actually being adorable. I kinda don’t blame Brittany for not stopping this party from going on. While the ladies hold the “ultimate f*ck Jax” party, the dudes throw back shots and try to keep Jax busy while the “sh*tstorm” brews. Schwartz’s words. Not mine. James is enjoying the bonding session with the Pump guys and loving that he “has his job” back at Pump…only on Tuesdays. Minor detail, though. The witches of “WeHo” wish to cast a spell on “scorning a cheating lover.” This party got really weird, really fast. Katie explains they are like the sisters from Hocus Pocus, only prettier. Right. Brittany believes that Jesus would approve of this situation evolving because Jax is really THAT bad of a human.

YOU GUYS. LaLa is BACK. Thank GOD. Those witches of WeHo were getting boring and the Brittany and Jax scenario was getting stale. So happy to see my favorite rapper/hostess is back because ya know, her “man is not an ATM machine.” LaLa is still protecting her mystery boyfriend’s identity and I love it. Who is he? Why is he so secretive? It’s about damn time SOMEONE on this show knows how to keep a secret, amiright? Teary-eyed LaLa begs Lisa for another chance and the answer is YES. LaLa is back as the hostess. The whole gang’s together again.

In the final segment of the show, the guys whip out some gag gifts for Jax. The ol locking chastity ring. The scary part is, Jax may really need to wear it in order to stop himself from doing another stupid thing. BECAUSE…As Ariana shares, this whole Faith and Jax thing wasn’t a ONE time thing. In fact, many people have heard this same news. Brittany immediately calls Jax to find out the truth. HAHA. Jax and the truth are two words that do not go together. #BUSTED. Jax loses his cool and hollers at Brittany on the phone like a lunatic. Now THAT’S a relationship worth fighting for. Jax is not invited back to Brittany’s apartment…until she decides she likes him again and wants to sleep with him, right? Drama, drama, dramaaaaa!!

TELL US – WHAT ARE YOUR THOUGHTS ON THE VANDERPUMP RULES RECAP & LATEST EPISODE?