Home Don't Be Tardy Kim Zolciak’s Daughter Brielle Biermann Slams Critics of Their Relationship! Says They Can “F**k Off”

Kim Zolciak’s Daughter Brielle Biermann Slams Critics of Their Relationship! Says They Can “F**k Off” 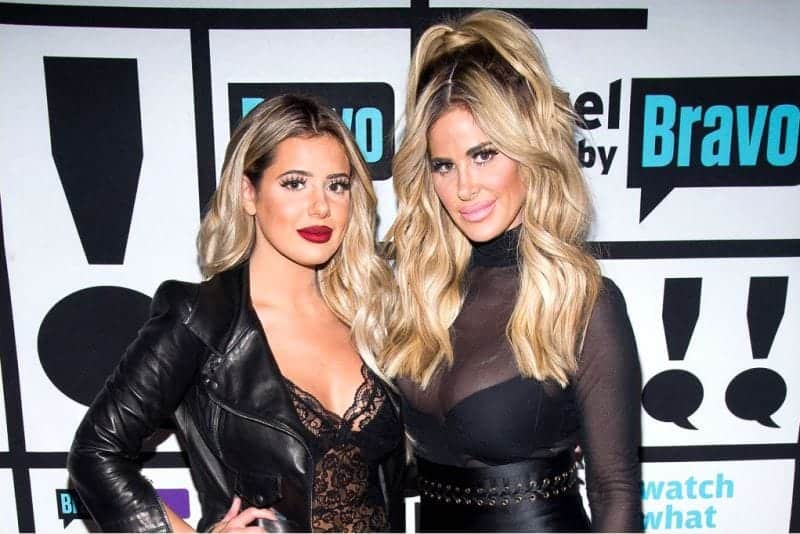 In today’s news, Kim Zolciak and daughter Brielle Biermann continue to be in the running for the classiest mother and daughter duo!

The latest is a new interview by Don’t Be Tardy star Brielle, who defends her bizarre relationship with her mom Kim and slams anyone who has anything negative to say about it.

First Brielle, 20, explains why she put out a false tweet earlier this month claiming Kim, 39, was pregnant with her 7th child.

“My mom posted a video of me on her Snapchat that really irritated me, so I was sitting downstairs with two of my best friends, and I was like, you know what, I’m gonna tweet that she’s expecting,” Brielle told TooFab. “I didn’t think it would take off as quick as it did, but within 10 minutes, it was everywhere. I was dying laughing. She wasn’t even mad, she was just like, ‘What the f-ck is wrong with you?'”

The video that Brielle is referencing is one Kim mistakenly posted on her SnapChat during which she asked her daughter to flash her chest so the recipient could see the size of her boobs. Who was the intended recipient? Khloe Kardashian, who is reportedly friends with Kim. So, mother of the year Kim asked her daughter to flash her chest and then unintentionally uploaded that footage for the world to see.

And let’s not forget the now infamous tweet offering up her daughter to John Legend to get tickets for his show.

@chrissyteigen sooo ur hubby is comin to ATL may19 & Kash is beyond OBSESSED w him! who does Brielle have to blow in order to meet him?? LOL

But according to Brielle, there is nothing twisted or abnormal about her relationship with her mommy dearest, and anyone who has anything negative to say about it can simply “f**k off!”

“It’s my life, and I don’t know why people are so concerned with it,” continued Brielle. “I understand I’m in the public eye and people are interested, but my life does not affect you, and until it does, just let me live my life the way that I want to.”

She also makes it clear that Kim is not just her mom, but also her friend!

“People see my relationship with my mom as too friendly, but I don’t think you could ever be too friendly with your parents,” she shared. “I think some parents aren’t close enough with their kids, and communication is key in my family. My whole life, I’ve told her everything that goes on, even stupid things or things she may not be comfortable with hearing. She is truly my best friend, and I hope that it stays that way.”

TELL US – WHAT ARE YOUR THOUGHTS ON BRIELLE’S COMMENTS & HER RELATIONSHIP WITH KIM?