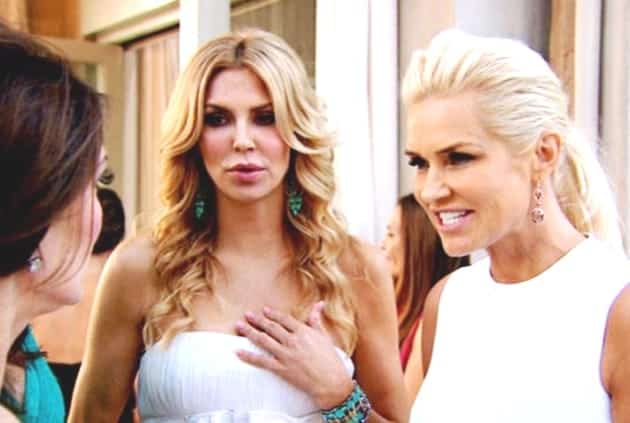 Former Real Housewives of Beverly Hills star Brandi Glanville is speaking out against her former BFF and castmate Yolanda Hadid, and it all has to do with Yolanda’s book.

In a recent podcast, Brandi opened up about the status of her friendship with Yolanda these days essentially stating they are no longer friends. The reason? She says their friendship was always one-sided and that Yolanda never really put in any effort when it came to their relationship. Additionally, there was something Yolanda wrote in her memoir that really upset Brandi.

First, a listener called in to Brandi’s Drinking and Tweeting podcast, and asked if she still speaks or hangs out with Kim Richards and Yolanda.

“Okay the truth of the matter is I still speak to Kim quite often,” said Brandi. “In fact she blew up my phone last night while I was trying to sleep. I will show you the missed calls. It was a lot. She is something special.”

However when it came to Yolanda, Brandi revealed her hurt over Yolanda’s claims in her book Believe Me: My Battle with the Invisible Disability of Lyme Disease

that none of her RHOBH castmates were her true friends, stating that they never reached out to her off camera. Brandi is calling foul on that saying she was always there for Yolanda away from the cameras, despite the fact that it was never reciprocated.

“Unfortunately me and Yolanda. I’m actually really sad about this because I was such a good friend. Honestly such a good friend,” shared Brandi.” And I’ve read her book and I felt like she just kind of lumped me in with the other women.”

Brandi continued, “And I have been in her house like over a dozen times, no cameras. Like always calling, always checking in, always going over especially to the condo before she moved. After her and David got divorced, i was there. I was on the phone. I was at her place. And she’s like oh yeah, I’m not really friends with any of them. And its just really sad.”

She adds that this ultimately led to the demise of their friendship.

“Ultimately, when you text someone and it’s one-sided, it’s like hey how are you? Hey I’m coming into town. If it’s not reciprocated, at a point you wash your hands off it,” spilled Brandi. “I give and I give and I give, and I reach out but it takes two to have a friendship. And I love her to death but I don’t appreciate her book.”

Finally, Brandi states she got tired of kissing up to Yolanda, while reiterating that her friendship with Kim is still solid.

“I’m just really bummed that her recollection is so unclear. I will say that I’ve been to her house without cameras at least 20 times. And you want to know how many times she’s been to my house without cameras? Zero. It sucks. Reciprocation in friendship is key. You have to give up at some point. I’m not going to kiss your f**king a** forever,” shared Brandi. “But Kim and I talk all the time. We’re nutty. It’s nuts. I love her. It’s crazy.”

TELL US – THOUGHTS ON BRANDI’S COMMENTS? ARE YOU SURPRISED THEY ARE NO LONGER FRIENDS?