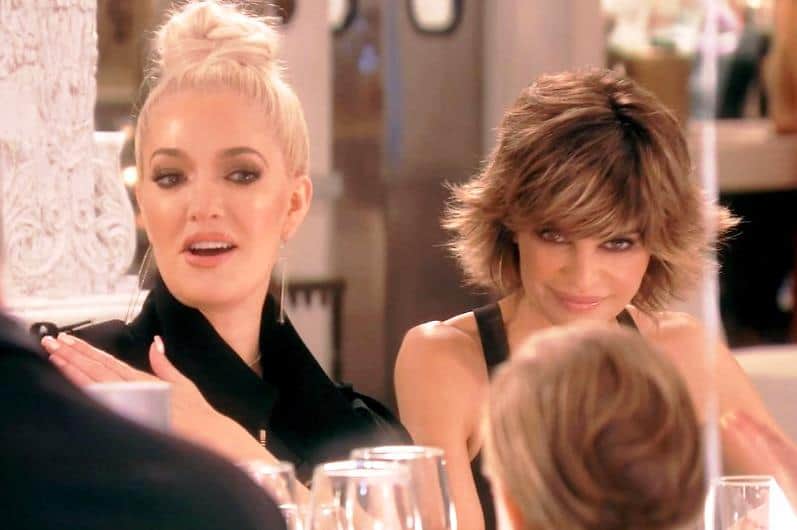 What kind of drama can the ladies stir up this Real Housewives of Beverly Hills episode?

Ah, the weekly housewife check in. This is always my favorite part of the episode when we simple people get to see how the rich and Bravo famous live. I had to rewind that Erika moment because I was pretty sure she was bragging about receiving “prison letters” and yes, yes she was. This girl…!!

The episode begins when PK enters Dorit’s lair to find out more about the Vegas trip. Dorit proudly shares “I’m cool with Erika” and it’s a good thing because Dorit’s birthday celebration just.keeps.going. Pk tells Dorit he is planning (yet another) birthday party for her and he is uncertain if Rinna should be included on the guest list. Dorit basically thinks she is St. Dorit since she decided to invite her arch nemesis, Rinna, to the party. Someone give this woman a biscuit!

Poor Kyle having to live through the renovations on her multi-million dollar house…All of that hammering. All of that noise. It is just SO difficult for the Umansky’s that they have to, just HAVE to, escape to Croatia. Sigh. What a life.

Meanwhile, Teddi and Rinna get together for lunch since they have a “connection.” Rinna claims that she opens up too quickly, so therefore she will take her time getting to know Teddi by having lunch with her immediately following the weekend they spent together in Vegas. Pump the breaks, Rinna. Teddi declares she is “going to make her own assessment” of Rinna and thinks they could be pals. They bond over horses because that’s the only thing Teddi ever talks about to anyone. Teddi then invites Rinna to come to her horse show because, more horses.

LVP, aka boss lady, so kindly opens up one of her million restaurants and hosts Dorit’s birthday party for PK. PK, Mollie (Dorit’s assistant), and Dorit’s daughter Phoenix all sing an adorable rendition of the birthday song for Dorit, who looks like she just stepped out of a hurricane. What is with that hairdo?

As the guests roll up to the party, the women all ogle Eddie, Teddi’s husband. They’re like sharks circling the “young, hot” husband. Rinna realizes what a big deal this birthday party invite is and tries to put her apprehension aside. PK surprises Dorit with her own son (??) dressed in a white tux. According to Dorit, “It’s the most unforgettable birthday she could ever, ever wish for.” We ALL know she was looking past the kid trying to see if there was a car parked out front of the restaurant. The jig is up. While at the dinner party, Teddi decides to let Erika know that she felt “dismissed” by her. Erika could care less how she makes a person feel because she is dead inside. Erika just gives Teddi a lame apology to end it quickly- sorry Bravo, so much for a fight. Rinna, of all people, stands up to make a speech for Teddi, and naturally, makes the speech about herself in true Rinna fashion. The speech went a little like this: I can’t believe I am invited. I think it’s so cool I’m here. I can’t believe I made the guest list. Oh and happy birthday, Dorit.

In other news, Erika is writing a book. Obviously. Brian, Erika’s co-author, jumps right in and is helping “The Pretty Mess” become organized. We learn more about Erika’s father situation and all the while, Brian is not taking ANY notes. Is anyone else wondering how he is EVER going to co-author this book? Erika explains that her relationship with her father, if one could call it that, kind of “petered out.” It is really a sad story; however, the sadness gets washed away once Erika talks about her son. I wonder what HE thinks about his mom running around patting her p*ssy??

Rinna, Dorit, and LVP are decked out for Teddi’s horse show. It’s legit as if they googled what to wear to this type of event and then did the opposite of what it said. Hey guys, does Teddi love to ride horses? I’m not sure because she NEVER mentions it or anything. Sheesh. Can we get another story line for this girl? BTW, if my friends rolled up looking the way these chicks did, I would totally pretend I didn’t know them. I mean, Dorit’s outfit and footwear? I am cringing FOR her. Teddi just so happens to win first place. Coincidence or pure skill? The world may never know.

Dorit decides to host a dinner party with Teddi and her husband, Eddie. Nothing is more awkward than a blind husband date: now you two get along- forced friendship status. The couples bond over parenting and childbirth and it was a heavy convo. Teddi shares this gut wrenching story about her son and his heart and then PK tries to lighten the mood by explaining he, too, experienced something rough during the birth of his kid: his son had a CONEHEAD. Please note: this is not comparable to Teddi’s story. Just stop, PK.

According to PK, Dorit is a “brilliant cook” and I legit didn’t think she actually cooked the meal, but alas, she did! I have a new found appreciation for the lady. As Dorit serves the crew, PK dives right back into the bash Rinna convo, making it all very uncomfortable for Teddi and her husband. Dorit explains that PK thinks Rinna is “schizophrenic” because she rages and regrets constantly. Teddi stank-stares at Dorit as she goes on and on and on about Rinna. Seems like that birthday speech Rinna gave meant absolutely nothing to Dorit. What is it gonna take for real forgiveness to take place for these ladies?!

TELL US – WHAT ARE YOUR THOUGHT ON THE RHOBH RECAP & LATEST EPISODE?