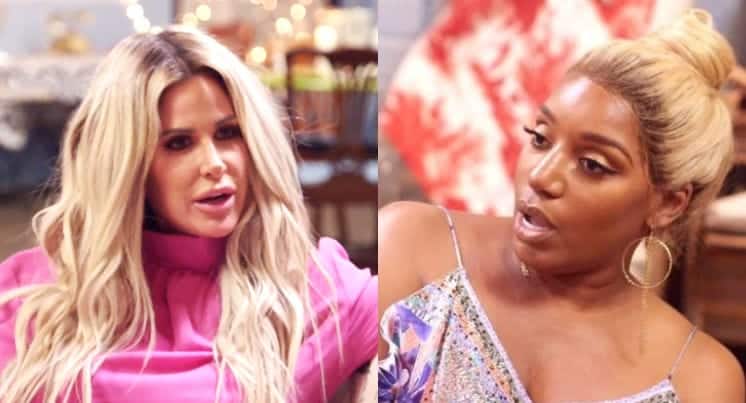 If there’s one takeaway from last night’s episode of the Real Housewives of Atlanta, it’s that most of these ladies have A LOT of growing up to do.

Let’s start with Cynthia. It’s been sweet seeing her start dating after her divorce from Peter, and she’s clearly smitten with Will, the man she’s been seeing for the last few weeks. But she turns into a blathering fool around the man!

When Will stopped by a party Cynthia was having for The Bailey Agency, and met Kenya and her Cynthia’s sister, Mallory,  Cynthia was fidgeting about and giggling like a school girl. And the fact that she was wearing denim overalls certainly didn’t help. OVERALLS!  Really Cynthia?! You’re a gorgeous,  successful woman, and more to the point..you’re 50!

But Cynthia’s not alone. Sheree is no more mature in her new relationship with prison bae, Tyrone. Sheree seems to spend a great deal of time running outside to have furtive conversations when he calls..collect.

Sheree is hiding the relationship from her children (sometimes I think she forgets she lives her life on tv), and is worried about what they’ll think when they find out about Tyrone.

When she’s not having phone dates with Tyrone, Sheree can usually be found stirring the pot amongst her castmates. Last night, she arranged a dinner for herself, Kim, and NeNe. Longtime viewers will remember that these three used to be quite the party!

They fought, sure, but it was mostly fun and games, and Sheree thought getting together might recapture the old magic…or she thought it would start a good fight. But anyway…dinner for three was planned. Sheree and Kim spent a good two hours cackling and gossiping about the others, including some world exclusive tea Kim dropped about Kandi’s um…sexual appetite. It turns out she once hit on Kim! Well, according to Kim, but still…pretty hot tea!

They eventually realized that NeNe hadn’t shown up, and called to check on her. Now, of course, NeNe couldn’t just make up a polite excuse..car trouble, a headache, a sick cat…because then the entire dinner wouldn’t have been about her.

Instead NeNe asked Kim and Sheree if they’d “gotten the memo”. When they asked which memo she was referring to, NeNe said “that I’m not coming”. See what I mean?! NeNe explained that they all needed to have a “larger conversation” about the “elephant in the room”.

Sheree and Kim acted as though this was news to them. For Sheree’s part, she felt that she and NeNe had been in a good place lately, and can’t imagine what issues they might have. Kim felt that something had been “off” with NeNe, and wondered if she might be “on something”. But really, NeNe’s issues with Kim go way back.

As far as new business, there’s plenty of that too. Kim showed up at NeNe’s white party as Sheree’s plus one, even though the two hadn’t spoken in ages, and immediately embarrassed NeNe by  calling her out for having a handicapped parking placard in her car when Kim had seen her at the mall.

Kim also started a heated argument with Kenya that culminated with the two screaming at each other, and Kim throwing a glass, effectively ending the party. As if that weren’t enough, Kim’s daughter Brielle threw shade at NeNe by Snapchatting a photo of herself in NeNe’s bathroom, and “unwittingly” revealing an apparent cockroach infestation in NeNe’s home to the world.

In an effort to address all the  elephants in all the rooms, NeNe called all of the women together to meet with a medium/“energy healer” (whatever the hell that is) named Embelle. Sounds therapeutic enough, right? And you would think this would help the ladies overcome their petty squabbles, right?

Well, not so much. It got pretty messy, pretty fast, with Kim and Kenya circling each other, and readying for Round 2. (Or is it 3? I’ve lost track)

Embelle was pretty no nonsense, and declared the space a “no phone zone”. The rest of the ladies readily handed over their phones, but Kim refused, saying she had “six babies” at home. This might be a good point, except, as Kandi pointed out, one of Kim’s “babies” is a 20 yr old woman. Kenya was annoyed with Kim’s noncompliance to the rules, and was quick to let her know it.

They were interrupted by Embelle before a full argument could ensue, but the ladies continued to glower at each other from across the room, waiting for a chance to pounce. Embelle, who might have had some bad energy herself, spoke to each of the ladies telling them what she “saw” in their energy, and she had some interesting insights.

She cautioned Cynthia about her relationship, but seemed to encourage Sheree’s. She believed Kandi to have psychic abilities, and in true Kandi fashion, she was contemplating the ways she could make money off it! She also proclaimed NeNe to be a “sweetheart” (she must not watch the show), who worries too much about what others think of her.

Things took a slightly ominous turn when Embelle turned her attention to Kenya and said she “wasn’t going to be around much longer”. Now don’t panic. Kenya will be fine. Embelle just felt that she had a “different destiny”.

Throughout all of this the ladies seemed a bit skeptical, but Kim was downright rude, whispering loudly about what a crock the whole exercise was.

Things took a creepy turn when Embelle suggested “bathing” Kim. When Kim asked for clarification, Embelle described a ritual that involved gathering leaves and sticks from outside and dipping them into a jar of who knows what, and using it to “cleanse” her. Kim wisely declined the “bath”, saying that she didn’t feel “a connection” with Embelle, and didn’t find her to be “truly of a higher power”, like Kim, herself. Good grief!

Embelle seemed confused and offended by Kim’s refusal, and ultimately stormed out of the room. I guess those baths are usually in higher demand. Who knew?

Once the ladies were left on their own, they all turned to NeNe expectantly, wondering when and if these “elephants” were going to be addressed. NeNe said that everything always had to be about her, and she wanted the others to address their own issues. But Sheree wanted to address the issues between herself and NeNe.

NeNe said she didn’t have anything to discuss with Sheree. But Sheree was quick to remind NeNe that she was the one who had said there were elephants in the room when they were together. Sheree asked if Tyrone was the issue. NeNe insisted he wasn’t the problem, but Sheree wasn’t about to let it go. She said NeNe was no one to judge, since she had a mugshot of her own. Well, that did it!

NeNe said that getting arrested was a far cry from being sentenced to 10 years for being a “con artist”. Sheree insisted that Tyrone was appealing his conviction, and that NeNe didn’t know what she was talking about.

When Kenya jumped in to keep the conversation from getting too heated, and to clarify the situation with Tyrone, Kim started with her loud whispering again, telling Sheree that Kenya was just jealous because Sheree is “really in love”.

Kenya heard her, of course, and invited Kim to repeat what she’d said loudly enough for her to hear. Having sworn she wouldn’t let Kenya get to her again, Kim addressed the others in the room, saying Kenya had crossed the line when she mentioned her daughter, Brielle, and picked up her phone and started texting her husband.

Kenya wasn’t going to be ignored, so she continued arguing her point, saying that she’d never spoken badly about Brielle, and that her comment had been about Kim. Technically, Kenya’s not wrong. She never called Brielle a whore. She called Kim a pimp. And there’s a teeny, tiny distinction between the two, if you look really closely.

Cynthia, always Kenya’s most ardent supporter, for reasons I don’t fully understand, jumped to Kenya’s defense once more. And it was this move that lead to the line of the night. Kim told Cynthia she should stop talking and “just be gorgeous”. Ouch!

At this point, the ladies began to leave, with absolutely nothing resolved, and without many of their issues even being discussed. But not so fast…NeNe asked Kim to stay behind and talk, and the two sat down on a couch together  for the first time in years. And it hadn’t gone well the last time. NeNe had walked out in a huff after Kim had accused her of trying to choke her.

Kim was full of accusations this time, as well. When NeNe asked why their friendship was never “quite there”, Kim responded by saying  that NeNe, herself, didn’t seem “quite there”, and that she was wondering if NeNe was on drugs.

This obviously made NeNe pretty angry, but the two ended on fairly decent terms, although both seemed to know that things between them would never be what they once were.

So, yes, these ladies are pretty messy. They just can’t seem to pull it together. But would we have them any other way?

Scenes from next week show them once again coming together for a good cause. But the goodwill doesn’t appear to last long. We saw Kenya flipping off the camera, and slamming the door, and declaring herself to be “done”. Could it be that Embelle knew her stuff, after all? Stay tuned!

TELL US – WHAT ARE YOUR THOUGHTS ON THE RHOA RECAP & LATEST EPISODE? TEAM KENYA OR TEAM KIM? THOUGHTS ON EMBELEE?