Home Vanderpump Rules Lala Kent Reveals She Is No Longer Friends With James Kennedy Due to His Comments! James Calls Her a ‘Hypocrite’

Lala Kent Reveals She Is No Longer Friends With James Kennedy Due to His Comments! James Calls Her a ‘Hypocrite’ 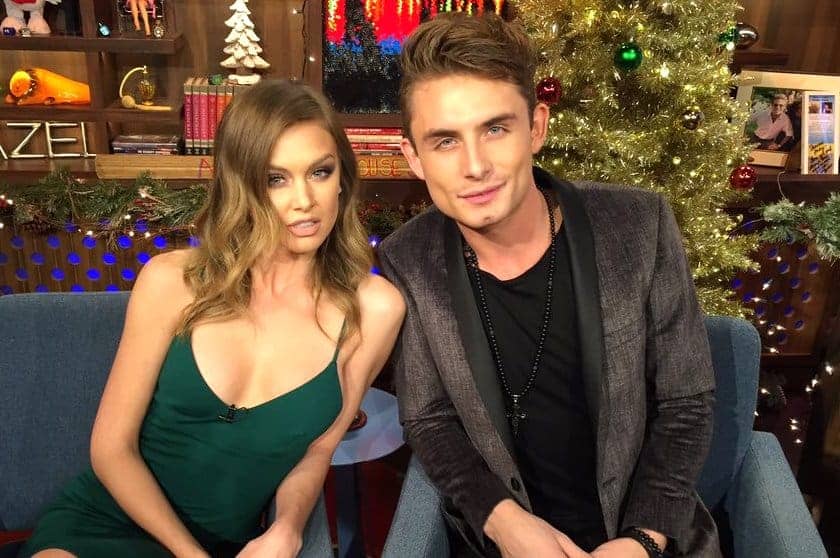 Following last night’s episode of Vanderpump Rules, Lala Kent is revealing today that she can no longer be friends with James Kennedy.

The reason? It all has to do with some not so nice comments James made about Lala’s boyfriend, movie producer Randall Emmett, on the show.

While the two were hanging out with James’ pal Logan Noh, Lala made a comment about eating the pasta of James’ girlfriend Raquel Leviss and for some reason, James took that to be a dig at his girl. Which led to a rather angry outburst from a drunken James in which he poked fun at Randall’s appearance by calling him “fat”, implied he was her sugar daddy because he pays her rent and even told Lala he would soon be replacing her with another young blonde. Ouch.

James apologized to Lala later during the episode and Lala accepted his apology though she was still visibly upset. But fast forward to today and Lala states after watching the episode again last night, she has come to the conclusion that she no longer wants James in her life.

She tweeted, “Tonight’s episode is nothing short of cringeworthy. James had always been a dear friend of mine. I make sure I baby him, I make sure he always knows I’m proud of him and I’ve been nothing but kind to his girlfriend. I don’t need to say this, because it’s been seen from the beginning.”

Lala continued, “I am constantly forgiving him for whatever venomous words he decides to throw at me. I remember the day that he attacked the person I love the most. The person that is my human. My everything. The one I would die for, and live to protect. I let it slide for some reason… maybe out of shock. After rewatching it, reliving it, and then dealing with his constant attacks on a regular basis, I’m sadly mourning the loss of our friendship.” 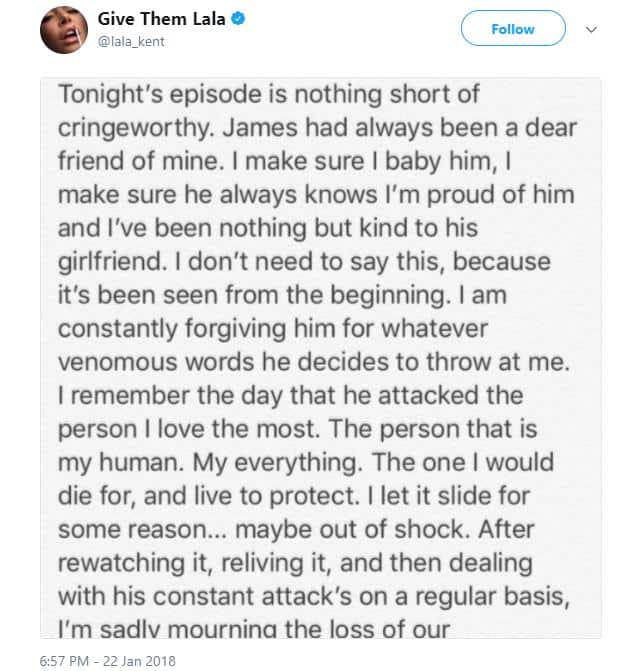 Wowzers, pretty hard to blame Lala there as James has a habit of being very vicious and going below the belt when it comes to his verbal attacks.

Moments after Lala shared her post, James responded by calling Lala a hypocrite for being friends with Kristen Doute and Katie Maloney despite all the negative comments they have made about her relationship in the past. However, he also makes it clear that he still wants to be friends with Lala and ultimately hopes they can talk things out.

He wrote, “Woke up today totally blindsided by Lala telling me she is distancing herself from me and isn’t celebrating my bday with me. I find it very hypocritical of her to constantly pretend like she’s best friends with Katie and Kristen, who have done nothing but talk s**t about her and her man for 2 years, but God forbid I let my temper get the best of me and she decides she needs to publicly bash me. Lala will always be a special person to me and maybe we can talk just the 2 of us instead of blasting me on twitter :/”. 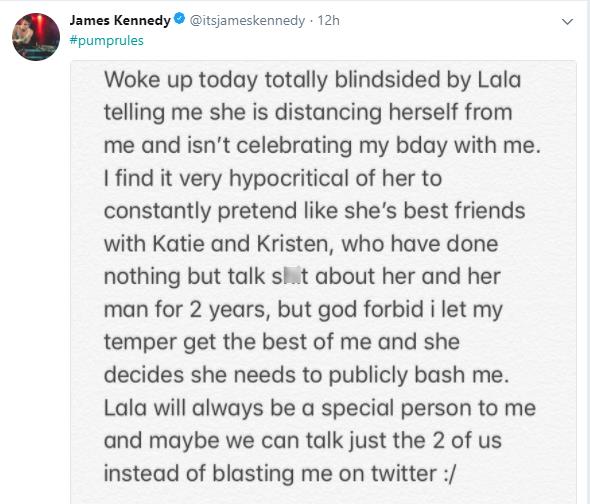 Lala has yet to respond to James.

TELL US – THOUGHTS ON LALA ENDING HER FRIENDSHIP WITH JAMES? RIGHT DECISION? OR FORGIVE AND FORGET?