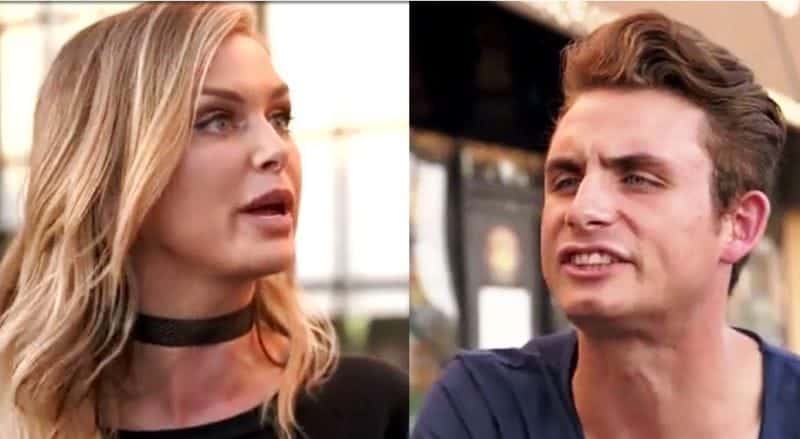 I don’t know what the Vanderpump Rules crew is talking about. It is ALWAYS about the pasta…#amateurs  It’s almost PRIDE DAY! LVP, as always, preps for her annual gargantuan rager to celebrate and Stassi, the event planning extraordinaire, is tasked to dress the gang in skimpy garments for the day. Stassi, of course, overshares with LVP about her breast reduction. Surprise! She actually didn’t tell the world about something that happened in her life.

The four stooges, Jax, Peter, Sandoval, and Schwartzie, attend Reiki due to Peter’s insistence. He is a pro; meanwhile, Jax is still quite unclear what the heck he is actually doing. Schwartzie shares his cheating scandal with the Reiki master and everyone else shouts out feelings, while Sandoval does his best ET impression wrapped completely in a blanket. When Jax is asked, he gets all emo and we may be actually seeing a tear. Jax hugs it out with the master and I am pretty sure that he is already planning his next tryst with her.

LaLa brings Scheana, Ariana, and Brittany to her botox office. “Everything I do is preventative.” I can’t tell if any of them are angry, sad, or happy because their faces are frozen. The girls begin discussing how Katie “deflects when she finds out her husband makes out with other” ladies in public. Scheana is STILL defending her relationship with her perfect almost-husband boyfriend Rob. Like. If it’s not true, Scheana, let it go! Amiright?!

According to Stassi, “There’s nothing more fun than a girls night.” Anyone else think Brittany is a bit of a snake, sliding in between the two groups? The girls dress up to see a movie and of course hit on the waiter. It appears as though Brittany seems to be getting her “mojo” back. “It’s nice to know that people do like me or are attracted to me.” Aw, Brittany. You are so much better than Jax.

James, his boyfriend Logan Noh, and LaLa head out for a brunch…lunch…dinner? Honestly, I can’t even tell what time of day it is because they are throwing back shots like crazy. James, more than halfway in the bag, shares with Logan and LaLa that Raquel Leviss is going to be moving in. Logan is “barely” excited because he is secretly in love with James….oh and LaLa and Logan “ate all of Raquel’s pasta.” The mood turns sour pretty fast. LaLa shares that when James drinks he becomes a “werewolf.”

James goes too far when he calls LaLa’s secret man fat and continues to state that her boo pays for her rent and that he would leave her in a heartbreak for a younger, prettier blonde, or something like that. It’s awful and nasty and LaLa has every right to storm out on the shots. (I would say meal, but it appears as though these people do not eat. Unless it’s Raquel’s pasta—heyooo!) James scampers after LaLa and yells for her to “read between the f*cking lines. It ain’t about the pasta!” “It’s about LaLa showing respect” for his girlfriend. Now ya did it, James. LaLa is not someone you want on your bad side.

At work, Scheana obviously makes everything about her. She demands to know if the girls were talking s*it about her and STILL won’t let the whole Rob smooching another girl thing go. I thought it didn’t happen, Scheana? Brittany explains that “it’s not like Katie made up the rumor on her own.” We are all baffled.

Dumb and dumber, Schwartzie and Sandoval, are ready to “get down, get dirty, and do some work” over at the soon-to-be TomTom. They are faking construction when Ken and Lisa stop by. OF COURSE LVP wants to know what’s going on with Katie and Tom’s relationship. The more they talk, the more I just think about how much work they are NOT doing… Pick up a hammer, guys.

Evidently these girls cannot do anything without each other. Katie, Stassi, and Kristen all gather around at Kristen’s apartment and Katie actually says, “marriage is good for us.” You know, so good that your hubby has to kiss other women. Women that are not you. Yikes. Meanwhile, Kristen lets the crew know that she is flying in Sherry, Brittany’s mother, as a surprise for her down in the dumps gal pal, Brittany. She is also doing this because she hates Jax and wants him to get dumped, but whatever.

Finally, parade day! LVP is decked in pink from head to toe and she looks fabulous, as always. Over at Sur, poor Scheana’s boyfriend Rob saunters in and remains a cool distance away from Scheana. She explains to him that she “lost my smile this week for sure.” Scheana cries and Rob keeps his arms crossed. He also does not reciprocate Scheana’s “I love you.” It is super uncomfortable.

Back at the parade, LaLa rolls up in a superhero costume (????????) and explains her newest fight with James to LVP, because alas, the lady loves hearing all of the juicy gossip. I think I am confused on what this year’s theme is. All I know is that there are flowers crowns, fake eyelashes, and Sandoval is OF COURSE doing his own make-up. SuperLaLa listens to Scheana moan and complain about the Rob issues. LaLa shares that she is concerned about Scheana’s weight—perhaps you should have offered her some of Raquel’s pasta??

Over at Pump, the drinks flow and the dancing gets riskier by the moment. Billie Lee, the transgender hostess, comes up to share her story with the crowd. Jax and Billie Lee vibe and compare lives, while James gets absolutely wasted. James and Logan hug it out over and over again and it appears as though we have a weird love triangle. Logan makes out with James’ ear and they party, while Raquel watches her boyfriend get stolen by Logan. Logan makes it clear that he loves James as “a lot more than a friend” and Raquel looks super confused. We are confused, too.

Scheana shares with LVP that she is “physically ill” because she has let “them affect” her relationship with Rob. WHY. IF THE RUMOR IS NOT TRUE, THEN WHY, WHY, WHYYY ARE WE STILL CRYING ABOUT THIS?! LVP shuts it down and grabs homegirl some food. She also tries to give Scheana some perspective on life. Save your breath, Lisa.

James and LaLa make up, but not before LaLa essentially threatens his life. I loved it. James + LaLa forever. LOL.  The next day, Katie and Kristen pop over to Jax and Brittany’s crib and then TADA, Sherry is in the house! Brittany’s mom’s surprise arrival terrifies Jax. He should be scared. He should be very, very scared.