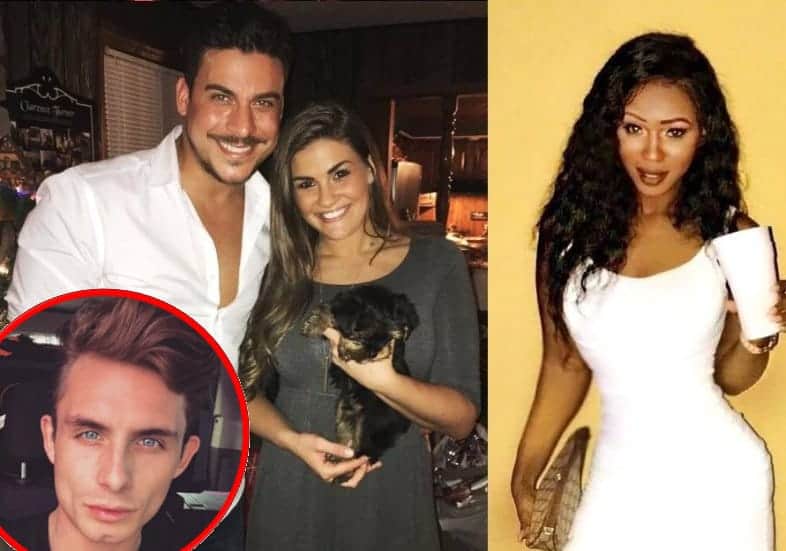 Faith Stowers has been a major topic of conversation on this season of Vanderpump Rules, thanks to her fling with Jax Taylor, despite only appearing in one episode so far.

Which is why Faith’s latest interview is all the more important as viewers of the show have simply yet to hear her side of the story. In a new podcast interview, Faith doesn’t hold back as she talks about what led to her secret audio recording of Jax and why she thinks Brittany Cartwright is “not a real woman.”  She also reveals why she no longer talks to James Kennedy and Lala Kent, plus she seems to strongly hint that there is more to James friendship with his friend Logan Noh!

“You have to understand that this actually is a sensitive topic to talk about but I will say as much as I can. It wasn’t on purpose. It was an accident. I was recording music. And honestly I didn’t even think that anything was going to happen between me and Jax to even like check the room.”

She Blames James On The Secret Audio Recording Getting Out –

“It wasn’t like I wanted it out there. Let’s just be honest. I could have put this out there if I really wanted to have it out there but I did not do that. And hadn’t had any plans of putting it out there. And James, even though that guy can be a f***ing douchebag, I love him till this day even though we don’t talk, he admitted to it on the last episode that he went through my phone and he did. We were at a restaurant, and I remember him stealing my phone and heading to the bathroom.”

“What hurts is that Brittany is shooting me down left and right knowing that she slept with Jax two days after finding out he slept with me. That’s disgusting. You’re not a strong human being. You’re not even like a real woman to do that. I would have let her have a pass had she not bashed me. Don’t bash me.”

Says Jax Was Desperate To Keep Their Fling Under Wraps –

“I know Jax, when he found out about me talking to James and Lala about it, he was devastated. He texted me and said he would kill himself if I told anyone. He was sending me audio recordings of him crying.”

She Is Asked If The Cast Including James & Lala Supported Her –

“No absolutely not. Turned their backs. James told me it was just business. And Lala got mad at me cause she had wanted to be a part of the [Jax cheating story-line.] She’s the one that I felt like would have helped me bring it out there in a better way and I just kind of felt like maybe they were never really my friends. I don’t know.”

She Implies James and Logan Are More Than Friends –

Wowzers. She said a lot there. Faith stated that she and James used to be best friends but he basically stopped hanging out with her to stay on Jax’s good side on the show, now that he and Jax are getting along. She does add that James is a “good person.”

Faith also revealed that she was asked to film more scenes this season but she declined citing she was busy filming another reality show on another network although she wouldn’t say which one.

TELL US – WHAT ARE YOUR THOUGHTS ON FAITH’S INTERVIEW? DOES SHE HAVE A RIGHT TO BASH BRITTANY? DO YOU THINK JAMES & LOGAN ARE MORE THAN FRIENDS?