Married At First Sight Part 2 Honeymoon Recap: The Honeymoon Is Over 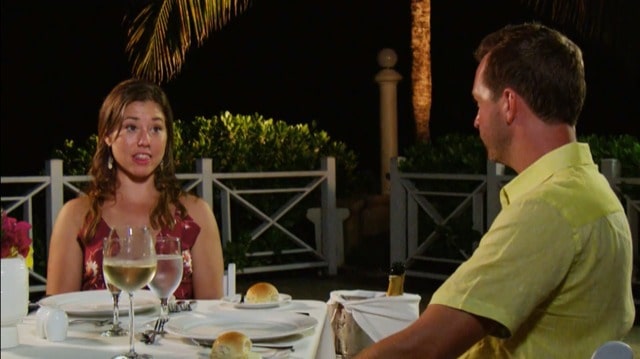 The honeymoon continues in Jamaica for the newlyweds on Married at First Sight  as the couples continue to get to know one another. One couple however is still moving at snail speed aka Jepthe, 26 and Shawniece, 29. During the honeymoon, the group gets together and two of the couples have a video chat with the experts to voice their concerns.

First up are Molly, 25 and Jonathan, 28, as Molly informs one of the experts that her husband is like a man child who can be too playful to the point that it’s a turn off for her. Ouch! “I don’t want to sleep with someone who is acting like a 12-year-old boy,” Molly informs the expert. Jonathan is shocked to hear his wife utter these words since she hadn’t communicated this piece of information to him, and he assumed they were on the same page. Guess not dude!

Jaclyn, 29 and Ryan, 29 on the other hand seem to be having a good ol time. The couple visited the local market and bought a few things, and we got to see Ryan driving a good bargain with the locals.

The morning after their big fight, there was still some tension between Jepthe and Shawniece so they had a video chat with Pastor Cal. Pastor Cal advised Jeptha to try and meet his wife halfway so she doesn’t become disinterested. Must say I’m still confused as to why Jepthe decided to get married in the first place as he is only 26 and just seems rather clueless and not really trying to make his marriage work. Shawniece also questions if Jepthe truly wanted to be married during her interview. What was he expecting?

When the guys get together they discuss their women problems and it’s likewise for the ladies. The ladies soon realize they all have different situations to work through as well in their marriages. Jepthe and Shawniece are sleeping on different beds while Molly is feeling like Jonathan’s energy is on another level. The girls do perk up when Jaclyn opens up about consummating her marriage with her husband. Overall, having the couples stay at the same honeymoon site seems to be a plus for them as they are able to encourage one another.

It’s day 8 of their marriage and we see Jaclyn and Ryan having a romantic dinner as Mr romantic recites his vows promising to be there for his wife though Jaclyn seems to have her doubts. She thinks Ryan is over the top and she isn’t sure if he is sincere. I guess Ryan has his work cut out for him. Molly and Jonathan discuss moving in together and she may have just realized she has some stiff competition with his cat. Good luck girl! Molly tells Jonathan that due to her allergies, she doesn’t want the cat in bed with them but Jonathan has some hesitation though I’m sure he will give in eventually. He seems like a smart guy.

Jepthe keeps saying he is so used to being by himself so living with someone was going to be a big adjustment. This is a bit surprising since he supposedly grew up with 13 siblings.  Jepthe did show his sweet side when he told his wife he was in this relationship for the long haul and Shawniece told her husband she will always have his back. So while this couple is moving slowly, they do appear to be moving in the right direction. Finally.

So the honeymoon is now officially over and it’s back to reality as the couples move in together next week. Stay tuned!

TELL US – WHAT ARE YOUR THOUGHTS ON THE MAFS RECAP & LATEST EPISODE?