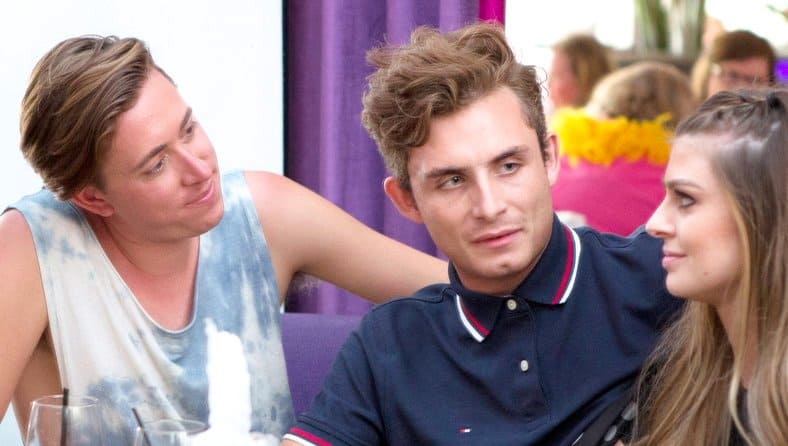 You know how the saying goes…secrets, secrets are no fun, unless you share with everyone. Glad to see that the Vanderpump Rules  gang really heeds that rule…

Surprise! Sherri, Brittany’s mom, is here! Thank you, Kristen. No one can stir up the pot quite like you can. Especially when your intentions are absolutely wrong, as you are hoping that this visit would speed up the break-up process for Brittany and Jax. So odd. Anyway, Brittany’s twin, I mean mom, asks Brittany if she is really ok and then states that “Jax may not be the right one” for her. Wow. This woman catches on quickly…

Katie and LaLa– yes you read that right- meet for dranks. Since LaLa and Katie have “squashed their beef,” they have decided to be “homies.” LaLa has now taken on a new role: friendship mender. I may have made that word up, but “she is all about feeling empowered.” Ya know, “the power of the p*ssy.” Now I know that may sound ridiculous in this context, but LaLa explains further that she wants “every single p*ssy to just get along.” Pretty clear now, right? Yea, I didn’t think so either. “How was lunch since you guys are f*cking best friends now?” Scheana, I would be absolutely awful too if I hadn’t eaten for 356 days. No need to be jealous and worry about losing your friend. LaLa, the woman empowerer, explains that Katie is not so bad. Scheana is not interested.

Later that night, the group gets together to celebrate Peter and Carter’s birthday. Everyone is there. Scheana in her camo coat, Max, LVP’s supa weird son, Ariana and her painted on white pants, andddd James. Where is LOGAN? Brittany’s mom in her hottie red jumper also attends the party because that is normal. Kristen has one more surprise up her sleeve: enter Tiffany, Brittany’s older sister. It’s a family reunion, ya’ll! Evidently, Jax and Tiffany did not get along well over in Kentucky, so in the words of Brittany, “this is probably going to be very interesting.” LVP also joins the scene because the party can’t start until she walks in. Drinks flow like crazy and the birthday boys, Carter and Peter, blow out candles, eat cake, and celebrate. LVP doesn’t waste any time and makes her way over to Brittany’s mom. The two women discuss the cheating scandal and Jax’s behavior. In the meantime, Jax makes it VERY clear that he is not amped for the surprise visitors’ presence. Brittany explains that Jax absolutely has to talk to her mother and sister and I love how uncomfortable he looks.

LaLa “feels like she needs to explain to these b*tches what new age feminism is.” I am not totally sure I know exactly what she is talking about, but I feel like calling girls b*tches is not exactly what it is all about…? LaLa proceeds to absolutely lose her mind when Scheana begins her “poor Scheana” battle. Back and forth the slinging goes until LaLa screams, “As a united f*cking front as women, what the f*ck is going on here?” I have to agree with Stassi here. “It’s terrifying and oddly beautiful all at the same time.” Scheana is totally flabbergasted and claims that everyone is FAKE! Schwartzie comes up with the best one liner everrrr. “You’re the fakest one here—look at your nails!” LOLOLOL. Hey-o! Anddd Scheana responds with, “All you care about is making out with chicks in bars.” Andddd THEN Katie says, “Come up with new material.” It’s like watching a ping-pong ball getting hit back and forth and I feel like I may have whip lash.

LaLa and James are out the next morning playing tennis. They look super natural on the courts. They fit in perfectly, especially when LaLa yells things like, “I don’t like it when balls fly at my face, as*hole.” Post tennis match, James and LaLa sit down to discuss all the drama. “Sur is the mother ship that holds us all together.” Man, these people are on fire this episode with the one liners. LaLa asks James about Logan. She thinks that Logan wishes James wasn’t straight. Logan’s in luck though, cuz there is really no way James is 100% straight….right??

Jax comes home with food for Brittany, her mom, and her sister. I think he is hoping that by feeding them, their mouths will be too full for them to ask about the cheating situation. It must be Jax’s lucky day because the topic of convo is not about Jax, but rather about how Logan told Brittany’s sister last night that he was SLEEPING WITH JAMES. Her sister also states that Logan said, “welcome to Hollywood!” WOWOWOW.

When is Schwartzie going to learn that telling his BOSS that he is hung over is NOT a good idea? Boss AND business partner? Man, he is dumb. Katie and Schwartzie, OF COURSE, fill LVP in about the Scheana altercation. They proudly explain that Schwartzie actually stood up for Katie, ya know, his wife. Hooray for you, doing what you’re supposed to be doing. Naturally, the convo turns to the Brittany/Jax scenario. LVP makes it clear that she is not happy with Jax and his behavior. Who is?!

Guillermo is a total babe and boxes. He invites the dweeby dudes to his gym for an intense workout. Not as intense as the rumor brewing about James, though. Jax, of course, shares the James/Logan tidbit with JAMES. James fakes confusion and denies everything. Even Schwartzie believes there’s a 77% chance that the two of them hook up. Stassi and Kristen roll up to Sur and ask to sit in Brittany’s section. The girls dive right into the Logan and James love triangle and eagerly share the juicy gossip with LaLa. LaLa does not seem surprised and explains it doesn’t matter- “we live in West Hollywood.” While this is all going on, James and Raquel go on a wine-making date, which sounds pretty incredible. The whole time, James is zoning out and continues to deny the rumor that the “whole world” claims. I feel bad for Raquel, for a plethora of reasons.

Later, the greatest plan gets hatched by Jax. SIIIIIKE. Bonehead texts James and asks him to come over to the den of Brittany’s family. Jax leaves and sets Brittany, her mom, and her sister up to discuss the ugly rumor Tiffany was told. Tiffany spills. She tells James everything Logan told her the other night. James puts Logan on speakerphone and Logan admits it was all a lie. I feel kinda like James bribed Logan to say that, but who am I? James gets all emo and explains he is upset because “he lost a friend.” We can all sit and ponder if it’s true or not, but we can all agree that we have never seen Jax smile as big as he did when Brittany’s family finally leaves to go back home to Kentucky.

TELL US – WHAT ARE YOUR THOUGHTS ON THE VANDERPUMP RULES RECAP & LATEST EPISODE? DO YOU BELIEVE JAMES & LOGAN ARE JUST FRIENDS?