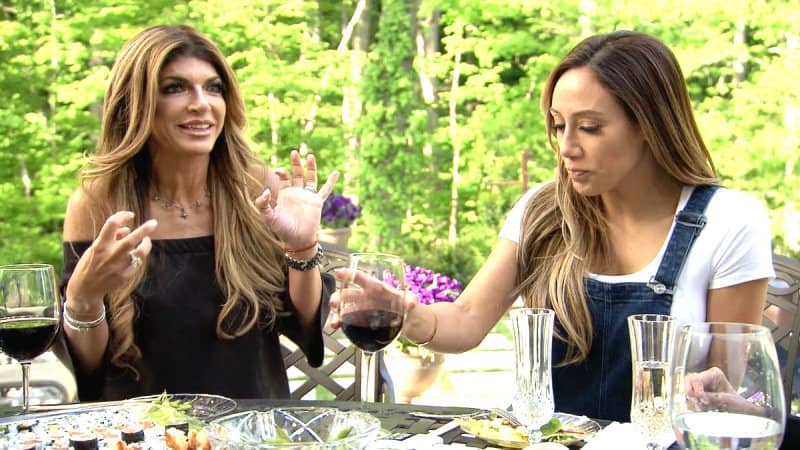 Well, we officially  had to say goodbye to the ladies of The Real Housewives of New Jersey…at least for this year.

But last night, as a parting gift, we were treated to some never before seen clips from the past season, and saw a much lighter and funnier side to the ladies than we’re used to. It was nice to see after such a tumultuous season.

All of the women have been through a lot this season, but it turns out that they were actually pretty supportive of each other, especially when it came to their romantic relationships.

Teresa is the only woman on the show not currently “getting any”. She’s married to Joe, of course, but he’s “away” for the next four years. Teresa has talked all season about missing Joe…and missing having regular sex…despite her anger with him over their predicament.

We saw her joking with the others about “dating” , and supposedly, there have even been some rumors about her doing just that, but despite the fact that Teresa could definitely do waaay better, she said she “would never”.

She’s definitely still sweet on Joe, for better or worse, in sickness and in handcuffs, and said that after 17 years together, he still gave her “butterflies” (really?!). She’s hopeful that he’ll be in a better place when he gets home, and looks forward to moving on with him.

Speaking of Joes, is Joe Gorga the sweetest and most adorable of all the husbands, or what? It must be impossible to stay, or even get, angry with him. Melissa and Joe were interviewing hostesses for their restaurant, Gorga’s, and while a bevy of beautiful, buxom young women filed through, even Melissa had to fight to suppress a smile at Joe’s boy like ogling and corny attempts at flirtation.

But perhaps she should have been a little concerned because Gorga’s  is quite the passion pit. Apparently just being in the building is an aphrodisiac. Just ask Danielle. She couldn’t even keep her clothes on through the grand opening. She and her boyfriend, Marty became the talk of the evening when Teresa discovered that the two had slipped away for a little X rated romp in the ladies room.

Teresa proceeded to go around and announce to the other ladies that the restroom was being “christened”, and every one of  them correctly guessed that it was Danielle doing the deed.

When Danielle rejoined the group, looking a little disheveled, but positively glowing, she freely admitted to the fun she’d had, and made no apologies for what Dolores deemed her  “disgusting” behavior. She did have some advice for her, though.

Danielle told Dolores that perhaps next time, she should bring her soulmate, and have a little fun of her own. You may recall that Dolores brought her ex husband and roommate, Frank, rather than her boyfriend, a fact that Danielle found strange, and didn’t hesitate to comment on. Danielle also said that she knew Marty was satisfied, and wouldn’t be going anywhere. And even Dolores would have to admit that she made a good point…especially since Danielle and Marty are now engaged!

That’s right! The girl who’s “BEEN ENGAGED 19 TIMES!!!” is rolling the dice for a twentieth. Well, actually we didn’t see Danielle or a couple of  years, so it could be the 21st or 22nd, but why split hairs?

The engagement was beautiful, complete with a violinist and dancers. Marty even included Teresa and Margaret, who helped get Danielle to the park, where he surprised her with the ring. The couple haven’t set the date, but Margaret, Teresa, and Melissa will be in the wedding party. I think it’s safe to say that Siggy and Dolores will not.

If you ask Joe Gorga, Danielle may not be the only housewife becoming, well…a wife in the near future. He predicts that Dolores, and her ex husband, Frank, will get remarried. He has a point.

Dolores and Frank’s divorce is…interesting, to say the least. He recently moved back into the family home, and while they both swear that it’s strictly platonic, no one’s really buying it.

Dolores has said that she feels like  they’re “no longer separate”, and Frank stumbled and stammered as he confided to Joe that he would always be in love with Dolores. It would be absolutely adorable if Dolores didn’t have boyfriend. Dolores blushed and giggled as she told Melissa and Siggy that she was in love with her boyfriend, David, but that she needed to “switch the dynamics” of their relationship.

David is an OBGYN, who specializes in high risk pregnancies, and is on call seven days a week. Dolores certainly admires his dedication, but it doesn’t leave a lot of time for romance.

Aside from being busy, David is oddly comfortable with Dolores’ living arrangements, which means he’s either WAY to sure of himself, or he’s “just not that into her”. Either way, Dolores said she’s prepared to walk away if her needs aren’t met.

One person Dolores will never have to live without is her bestie, Siggy. The two are nearly inseparable. A regular Lucy and Ethel. Or Lucy and some annoying, whiny woman, who cries all the time and throws temper tantrums over cake. But anyway, these two have each other’s backs.

In fact, Dolores has been accused of being Siggy’s puppet. She certainly can never seem to see anything negative when it comes to Siggy. But Dolores swears she sees her friend clearly, and can call her out about anything.

During the reunion,  a viewer actually asked Dolores if there was anything at all that she felt Dolores could change, or do better, but Dolores was at a loss. When she asked the others, they said that Siggy had a problem with social media.

Dolores agreed with this, and said that Siggy needed to stop obsessing about what people said about her, and responding to all the “haters”.

Siggy admitted it was a problem for her when people didn’t genuinely  like her, and that she did need to start blocking people like she did with Margaret.

Margaret, who has been Siggy’s whipping boy all season,  just rolled her eyes at this latest a bit of snark. For some reason these two just couldn’t get along. But we even saw a tender moment between them last night.

Siggy planned a photo shoot for herself for her 50th birthday, as one does, and invited Margaret along to watch (how fun for Margaret!). The two posed for a few pictures together, and even kissed on the lips!

It wasn’t  Cinemax material, or anything, but  it was definitely friendly. Who knows? Maybe these two will learn to love each other in time. Siggy won’t be returning next season (yay!), but maybe without the pressure of the show, Siggy will learn to appreciate Margaret’s free spirited ways.

So, we bid you adieu until next season, ladies. Thanks for the memories…the laughter, the tears, the threats of violence….nobody does it better!

TELL US – WHAT ARE YOUR THOUGHTS ON THIS SEASON OF THE RHONJ? WHAT CASTING CHANGES WOULD YOU LIKE TO SEE?