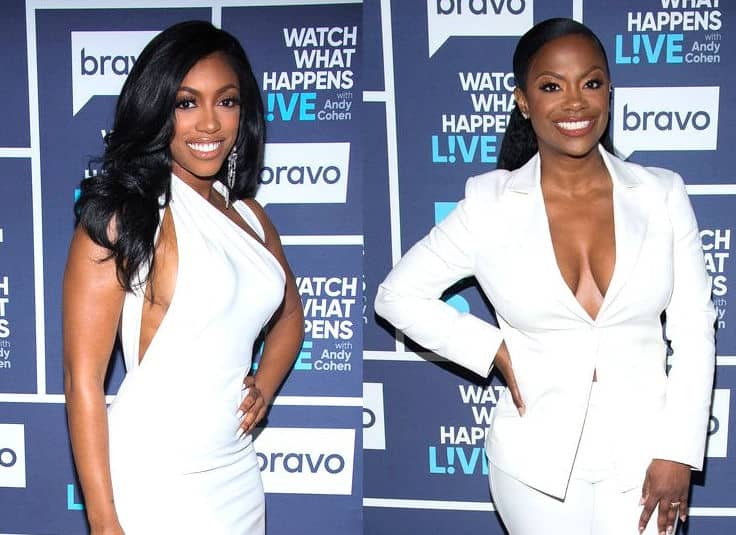 Things got a little awkward on the latest episode of the Real Housewives of Atlanta after Kandi Burruss invited Porsha Williams to her Essence magazine cover party.

Awkward because Kandi is no fan of Porsha’s at all, and can you blame her?! Porsha did falsely accuse Kandi of planning to drug and rape her, you know, in front of the entire world last year. Perhaps it’s a little understandable that Kandi has yet to fully warm up to her former friend again.

So why is Porsha upset? Well she’s upset because Kandi said on the show that the only reason she invited Porsha to her party was to show her what “winning” looks like. Things also took a turn for the awkward during the party when Kandi mostly ignored Porsha and Kandi’s husband Todd Tucker threw a little shade Porsha’s way when he made a speech during the event.

Which brings us to Porsha, who is now slamming Kandi and calling her actions “pathetic” and “classless” during her hosting gig on Dish Nation!

First Porsha claims her intentions were genuine in accepting Kandi’s invite and that she had hoped they could move forward in their relationship.

“For me I accepted the invitation because if you’re trying to get to a better place with someone and they invite you somewhere, especially for something special like this, I felt like I needed to go to show my support,” said Porsha. “You know as an effort towards doing better in our relationship.”

However, upon watching the show, Porsha now feels Kandi was out of line for how she treated her.

“Then watching the show last night, I was like this girl is so petty. It was just like beyond pathetic. Beyond classless. I just thought it was ridiculous. I wish I hadn’t gone,” stated Porsha.  “And then I didn’t know that she was giving the invitation begrudgingly like ‘Oh I’m going to invite her so she can see what winning looks like.'”

Excuse me while I continue to get over the shock of our dear Porsha using the word “begrudgingly” correctly!

Porsha wrapped up her comments by letting Kandi know that she is NOT the only one who knows what winning looks like. “Baby, you’re not the only one getting blessed honey,” said Porsha. “And I already thought that she thought she was better than me and better than other people, and now I see it. And that’s not humble sweetie. Check your attitude. I know exactly what winning looks like. You can see it right here.”

Kandi, who is currently starring in Chicago on Broadway, has yet to respond to Porsha’s comments.

You can watch the video of Porsha dissing Kandi below.