Real Housewives of Atlanta Recap: Tea Is of the Essence 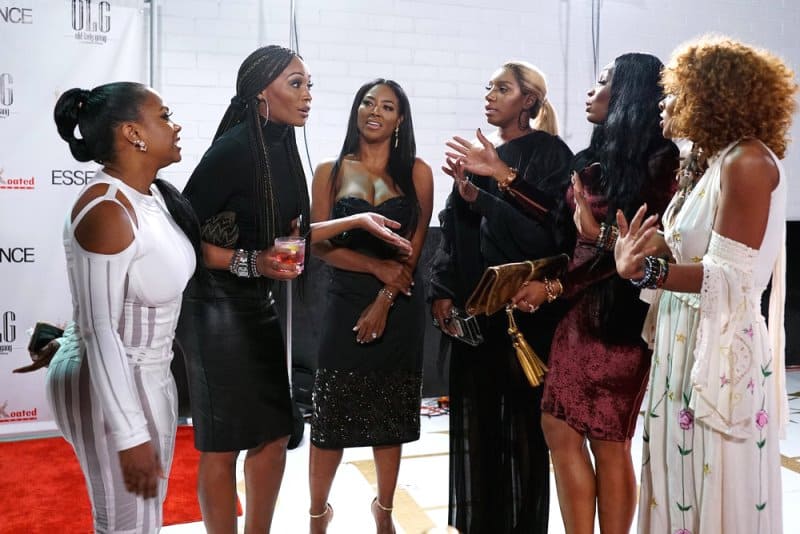 I have a small piece of unsolicited, but well meaning advice for the ladies of the Real Housewives of Atlanta:Stop having parties!

I’ve been watching this show for a decade, and have seen the ladies throw countless parties…birthdays, housewarmings, anniversaries. And no matter who it’s for, or why it’s being thrown, not a single one has ended happily.

On last night’s episode it was Kandi’s turn to celebrate. She was unveiling her Essence magazine cover, and announcing an amazing new career opportunity…she will be making her Broadway debut in the musical “Chicago”, in the iconic role of Mama Morton.

All of the ladies came out to show their support. But, of course, that was part of the problem. Maybe the ladies can throw parties, but just not invite each other?

It started out nicely enough, albeit a little awkwardly. Kandi was gracious enough to invite all of her cast mates, despite her personal feelings for them. A fact that her husband, Todd pointed out to everyone, when he stood up to make a toast. He even called Porsha and Kim out by name, embarrassing not only both of them, but Kandi. Drink AFTER you speak, Todd, not before.

Porsha mainly kept her distance from Kandi, but did eventually walk over to hug and congratulate her.  Kandi was cordial, if not a little cold, and Porsha seemed genuinely surprised that Kandi was still angry, but vowed to keep showing up and trying until things between them improved.

We were also introduced to potential new housewife, model and actress Eva Marcille. She’s a “good friend” of NeNe’s and also knows Kandi and Cynthia…and Cynthia’s new boyfriend, Will.

Cynthia and Will have been seeing each other for a couple of months, and it’s going pretty well. But as much as she likes him, Cynthia promised herself she wouldn’t get into a serious relationship for a full year after her divorce from Peter.

Will said that he’d been single for over two years, and didn’t have any interest in dating anyone other than Cynthia, and seemed disappointed when she said that she still wanted to “get her dating swirl on” and was, in fact, on a dating site. But Eva had evidence to the contrary. She’d met Will at a party a couple of months before, and he introduced his female companion as his girlfriend.   I know what you’re thinking…so what? Aren’t these people middle aged? Who cares if he was dating another woman a few months ago?

The other ladies certainly cared! They couldn’t wait to gossip about Will, and once Kenya heard this new scoop, she rushed to pull Cynthia outside for a big dramatic revelation: the grown man you’re dating, who has a child, by the way, dated other women before he met you.

Cynthia was a bit taken aback, if only because Will said it had been so long since he’d been in a serious relationship. But, come on. He didn’t said that he had spent the last two years of his life sealed in a vault, devoid of all female contact.

When Will came outside looking for Cynthia, she didn’t even have a chance to say anything before Kenya pulled HIM aside for a bid dramatic revelation: we all KNOW you dated other women before Cynthia ( I’m almost positive I saw this exact scenario play out at a roller rink in the  sixth grade).

Will denied having a girlfriend as recently as Eva was saying, and claimed that the woman was just his date for the evening. By this point, Cynthia had joined Kenya and Will, and was near tears, saying that she didn’t want to date him if he had a girlfriend. Good grief!

Finally, Will called Eva over to set the record straight. And because these ladies can smell drama from 30 miles away, the rest of them came over to see what was going on too. Will asked Eva why she was talking about him, and said that everything had been going perfectly with Cynthia, and that she was causing unnecessary problems.

Eva stood by her version of events, and said she was actually angry at Will for acting like he knew her and her boyfriend. What?!

Eva’s boyfriend, Michael Sterling, is running for Mayor of Atlanta, and after meeting them, Will had posted a picture on Instagram. Ok, now they didn’t have Instagram when I was in sixth grade, but I’m positive that THIS exact scenario is playing out among the twelve year olds of the new millennia somewhere out there as we speak.

Will was starting to get angry, and while he wasn’t at all aggressive, he was raising his voice, which NeNe was quick to caution him against. He eventually just went inside, and left the women standing outside shellshocked, and cooing over Cynthia.

Eva, once again, assured everyone that she was telling the truth, and apologized for causing trouble. Cynthia said that she didn’t have a problem with Eva, and that if anyone knew anything about someone she was dating, she wanted them to tell her.

Porsha said that if Cynthia really felt that way, she needed to tell her some things too. And then it faded to black. I can hardly wait to see what poor Will will be accused of next…kissing another woman five years ago? Going into a strip club back in college?

These ladies will make drama out of absolutely nothing sometimes. Each remains suspicious of Will and his “story”. Most of all Kenya. Even though she’s vowed not to get involved with pettiness and drama, now that she’s married.

Now, this alleged husband of hers has yet to make an appearance on the show, but we did finally see a picture of him last night. Marc looked handsome enough in his dark sunglasses, but when are we going to get a good look at him?

We probably shouldn’t hold our breath. Kenya said that he’s an “alpha male”, who consistently gets his way, and has no interest in the public world of reality television. He and Kenya spend most of their time at his home in NY. It all makes you wonder if Eva could be there to replace Kenya.

If so, she’s off to a pretty decent start. I mean dropping tea, inciting a blow up, and maybe destroying a relationship all on the first night?! All I can say is welcome to Atlanta, girl! You’re gonna do just fine.

Be sure to tune in next week. Scenes show yet another party…this time dinner with the whole gang at Porsha’s. And the ladies are planning a trip.  What could possibly go wrong?

TELL US – WHAT ARE YOUR THOUGHTS ON THE RHOA RECAP & LATEST EPISODE? DO YOU THINK WILL IS LYING?