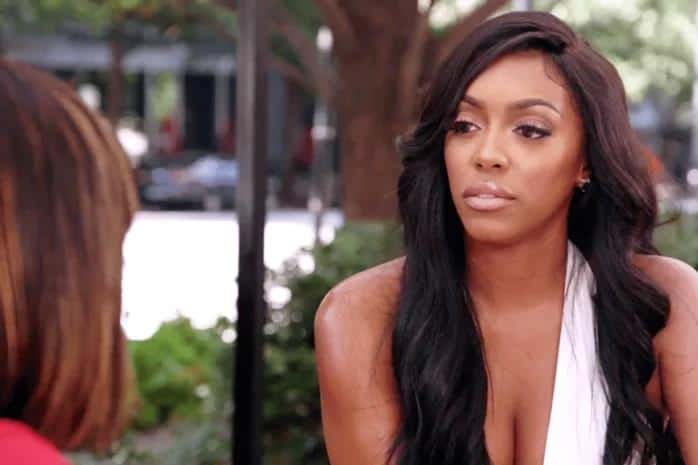 It’s been a couple of weeks since we’ve seen the ladies of The Real Housewives of Atlanta, and let’s just say they haven’t grown in that time.

When we left off with the peaches,  they were all in the middle of a junior high level conundrum. They had all found out that at Kandi’s party that Cynthia’s new love interest, Will, had a girlfriend prior to dating her.

Why all the drama over the past romantic life of a single adult. I truly have know idea. Perhaps they were bored. But the news threw the women into a tizzy, and sent poor Will running for the bar, but only after trying unsuccessfully to defend himself  to a mob of angry southern belles.

With Will safely inside, Porsha pulled Cynthia aside to share even worse news.  According to her, Will had told “a friend” that he was using Cynthia as an “opportunity”, and actually already had a girlfriend.

By now, Cynthia was in tears, and Will came back outside to ask if they could please just leave.  Once they were alone in the car, Cynthia told him what Porsha had said.

Will was indignant, and denied being an opportunist. Well, duh! Isn’t denying the existence of the game the goto move of any true player?

But to be fair, Will made a pretty good point when he asked Cynthia just what it was he would “get” out of dating her. After all, he’s a handsome,  eligible guy, who’s successful in his own right. He went on to wonder aloud what he had gotten himself into. Get out while you still can, Will! Seriously, chew your own leg off if need be.

Just before Porsha left the party, she got a surprise of her own. Kandi’s mother, Mama Joyce, pulled her aside to ask if they could plan a time to get together to talk.

When the two women sat down together, Mama Joyce asked the question that has had viewers scratching their heads since last season: did Porsha REALLY believe that Kandi and her husband, Todd, had been plotting to drug and rape her?!

Porsha explained that she wouldn’t have thought Kandi and Todd were capable of such a thing (ya think?), but that former castmate, Phaedra Parks, a lawyer, no less,  had been very convincing when she said that Kandi had admitted the plan to her.

Mama Joyce is usually pretty ruthless, especially when it comes to her daughter, but she was surprisingly compassionate toward Porsha.

She even confided that she’d been angry with Phaedra ever since she introduced Kandi to Todd, who had been “a worker” when they met. Actually, he was a producer on the show, but tomato tomahto.

Porsha’s been around long enough to know what a monster-in-law Mama Joyce can be, and simply said that Kandi meeting Todd had turned out well, pointing out that they’d married and had a son. Mama Joyce quipped that Kandi had “made lemonade out of lemons”. Ouch!

Before they parted ways, Mama Joyce encouraged Porsha to keep trying with Kandi, and said that her daughter is much more soft hearted than people think, and would likely be receptive to hearing Porsha out, as long as she told the truth.

It seems everyone was full of advice last night.  NeNe took Cynthia out to lunch to talk about what had happened with Will. I guess she felt partly responsible for all the trouble since it had been her friend, and new cast member, Eva Marcil, that started the talk of Will having a girlfriend.

NeNe said that Will did seem like a nice guy, and that she was happy to see Cynthia excited over her new relationship, but cautioned her friend to be careful and tread lightly until she really got to know him.

Cynthia also found time to sit down and talk with ex husband, Peter. He had been at the party, as well, but when he’d realized Cynthia was there with a date, he’d left without so much as a hello to his former wife, and Cynthia wanted to know why.

Peter explained how awkward it had been to see Cynthia with another man, and said he couldn’t imagine ever wanting to meet one of her boyfriends. It’s a little sad to see these two. They clearly still love each other, but both know that they simply don’t work well as married couple.

But Peter still has Cynthia’s back, and he loves gossip as much as any of the women, so he already knew all about the whole Will debacle. He also advised Cynthia to be careful, but also told her to stop worrying about what the others thought of her, and to do what made her happy.

Later on, Porsha threw  vegan dinner party, and the ladies discussed plans for an upcoming trip to Barcelona. A girls trip to Spain sounds divine, and all the ladies were on board, except for Kim. She wanted to bring Kroy along on the trip.

Kim and Kroy enjoy a close, but odd relationship. Kim rarely goes anywhere without him. Viewers may have noticed that even when she’s out with the girls, Kroy often drives her, and waits outside until she’s finished. Whether this arrangement is due to possessiveness or the omnipresence of Kim’s red solo cup is unclear.

The ladies tried to convince her to leave Kroy at home just this once, but Kim wouldn’t hear of it. She said that she’d suffered a stroke on a flight to California, and the 10 hour flight to Barcelona could be dangerously taxing, and she NEEDED her husband with her.

The ladies didn’t really seem to buy it. Ever since she got married, Kim has been cagey about traveling with them. The ladies had wondered if covert racism played a part in her canceling plans to go to South Africa a few years back, and she was full of excuses about her pregnancy when the ladies planned a trip to Anguilla. But for reasons I’ll certainly never understand, the women seemed downright desperate for Kim to join them in Barcelona, and in the end, they  relented, and said that Kroy could come along.

But it was not to be. Before they could even start packing, Kim called to say that she wasn’t going after all. Newlywed (and possibly newly pregnant) Kenya also begged off in favor of spending time with her hubby. No surprise there. None of the ladies have yet met this mysterious groom on American soil, so they certainly didn’t expect him to come to Barcelona. Maybe he’s in the witness protection program.

Well, with or without Kim and Kenya, the ladies head to Barcelona next week, and since the only thing more disastrous than their parties is their vacations, it should be pretty fun…for us anyway.  Stay tuned!

TELL US – WHAT ARE YOUR THOUGHTS ON THE RHOA RECAP & LATEST EPISODE?