Vanderpump Rules Recap: Lala Confronts James and He Confesses His Love For Her 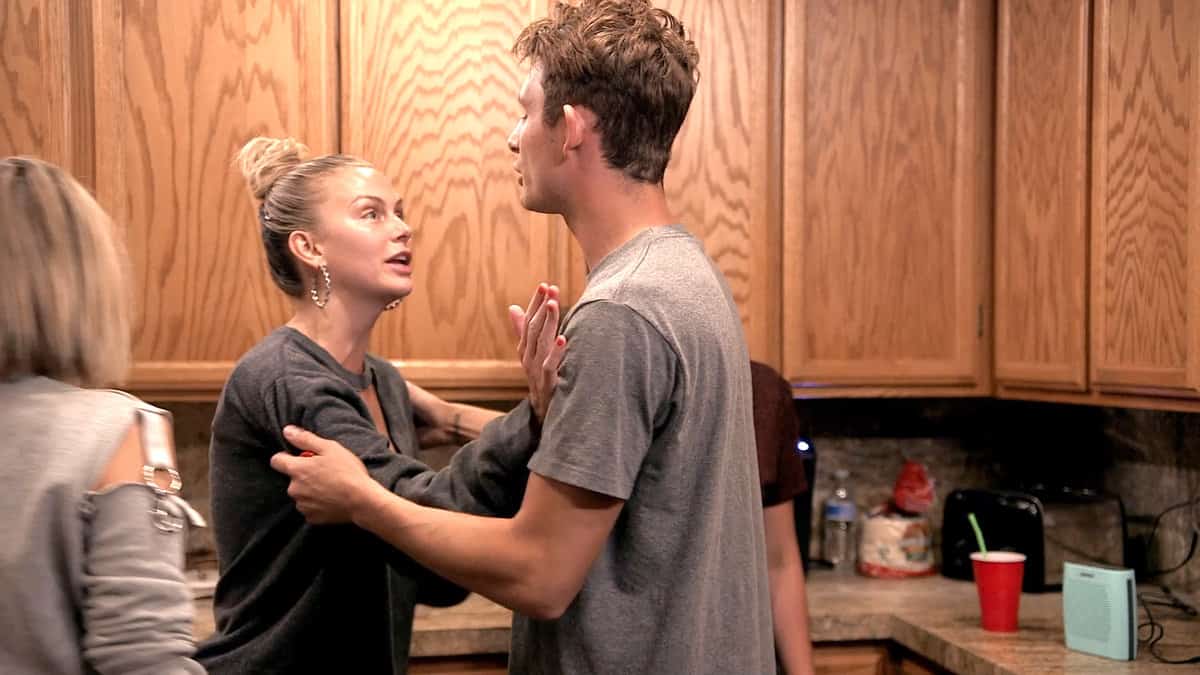 Between Scheana bragging about her boyfriend and the James and LaLa drama, this episode of Vanderpump Rules is a lot to handle.

While Sur is “still getting it’s facelift,” Ariana, Tom, and Scheana are baaaack at Villa Blanca…the first place this gang all became buddies. Instead of working, they sit around polishing glassware and discuss their upcoming trip to Big Bear hosted by Scheana’s boo, Rob.

The group of people attending sounds like a recipe for disaster considering this one hates that one, this one has bad blood with that one, and then there’s just Jax and James, who are equally toxic to anyone. LVP listens intently and scoffs at Scheana talking about how great her soul mate, Rob, is and how she’s being going to Big Bear with him for 11 (???) years. Slow your roll, girl. You aren’t even officially divorced yet! “When Scheana falls, she goes in hook, line, and sinker”- LVP.

Craft party, ya’ll! According to Brittany, “Scooters are a necessity in LA.” I don’t know what’s more hilarious: trying to picture these chicks scooting around the city or watching them “bling out their bikes.” Enter Stassi: fake crying, apologizing left and right. The girls clearly don’t care about Stassi’s emotional well-being, but are more like, b*tch, gimme my money back. Surprisingly, Stassi brought her checkbook. Friendship mended. The scooter gang is back, guys.

Whilst packing for Big Bear, Jax annoys Brittany incessantly and LaLa shows up to their crib so she can travel with this couple. LaLa asks Brittany about her relationship with Jax and LaLa then moves onto the James subject. Evidently, besides having the hots for Logan, James also sweats LaLa hard and hasn’t quite gotten over her. LaLa is skeeved. “I look at him like a brother.” #friendzone. This trip won’t be awkward at all….

“Rob’s cabin in Big Bear is a 3 bedroom water-front, private dock house.” Scheana is playing house so hard it’s painful to watch. She’s using pronouns like “our” and “we” and it’s “just all like, #itsallhappening.” I cannot make this up. The group finally arrives to their, I mean, Rob’s house and Scheana gives them the grand tour. She sends the boys out on a liquor run and the girls all sit down by the lake and get treated to a Scheana monologue. She goes on and on and on about how her boyfriend Rob is “the handiest person” she knows. He is just oh so sexy. Someone shut this lady up.

Racquel, James’s girlfriend, has somehow weazled her way into getting invited on the trip. LaLa lets Racquel know that she is not happy with James, so she better keep him in check. That should be reaaaaaaaaaaal easy.

Because no one likes Stassi or Katie, they were not invited on the Big Bear trip, and therefore, they hang out together and discuss Stassi’s “boyfriend” Patrick. Katie senses a different Stassi when she is around Patrick and Stassi admits she “walks on eggshells a lot” around Patrick. Woof. Worst relationship ever. Stassi shares that she is so glad she is seeing a tarot card reader because, duh, everyone knows tarot cards are the be-all, end-all when it comes to matters of the heart.

Back at the cabin, James and Racquel have a heart to heart on the deck about LaLa and the cruel things James says about her boyfriend. It seems to me that James is waaaaay too interested in this relationship. He is so “loyal to LaLa,” but maybe he should be more loyal to his GF and focus on fighting off Logan rumors.

Q: How is LVP surviving without these tools? A: Just dandy. She is busy being a true boss lady and getting Sur back in action, post fire. After just three days of reno, Sur has opened, and is better than before. Peter is stuck working at the restaurant, but to be honest, I think he is safer there.

Man, Sandoval really dresses the part wherever he goes. Flannel Sandoval. It is incredible. Stassi, Brittany, and LaLa are cooking for the crowd and James, well James, is just being annoying, and drunk, and…just like…James. After a dinner of fajitas and awkward James and LaLa encounters, it’s game time! Everyone sits around playing a game of Have You Ever full of sexual questions. It’s enlightening hearing a lot of TMI coming from these people.

Meanwhile, Katie and Stassi head on over to Angie’s house, the tarot card reader. Now’s the time that Stassi is going to learn the fate of her relationship with Patrick. She couldn’t see the writing on the wall, herself. No, no… she has to learn this from a tarot card reader. Through very vague phrases and statements, Angie basically says that Stassi should not keep going with Patrick. And there it is…

Over at Big Bear, old man Jax and Sandoval commiserate about how out of control James is and how “gassed” Jax is. This 38 year old cannot hang anymore and is feeling a little left behind. Jax believes he may be stuck bartending at Sur for the rest of his life, but alas, the deep convo has to end because they feel like they need to see what all the yelling is about. You guessed it. The yelling was coming from James. And here it is…the moment we have all been waiting for. I think LaLa may actually kill him. I thought the day would never come. James can hardly stand straight, which is made more difficult since he is busy playing with his fidget spinner??

LaLa explains that James goes from “zero to one hundred” really quickly and she attempts to have a “moment” with him since everyone leaves them alone to sort through their issues. James states he is not LaLa’s friend and leaves the room. Racquel follows James and lets him know that she is not pleased with the way he always behaves with LaLa. Not surprisingly, James is not affected by his girlfriend’s issues and instead agrees to sit down with LaLa to figure out their business. James shares that he “has loved LaLa” and LaLa makes it clear that they need to respect their significant others. LaLa states that she needs boundaries with James, but of course, the issue is not resolved. Because…where’s the fun in that?!

TELL US – THOUGHTS ON THIS VANDERPUMP RULES RECAP & LATEST EPISODE? IS IT TIME FOR LALA TO CUT JAMES OUT OF HER LIFE?