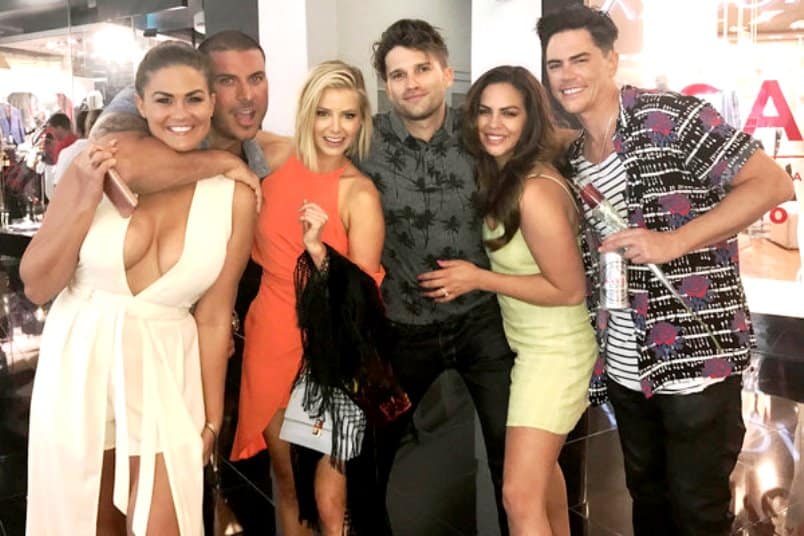 Finally. Back at SUR. I feel like I’m home again. The place looks great and was spruced up in record time. Scheana explains that “what Sur needed was a little Botox here, a little filler there…just like everyone else in West Hollywood.” Totally. It is evident that not much has changed in the short SUR hiatus. The crew still fake-works there and it’s a hot minute before they all have to skip their shifts to attend a Vegas trip.

This isn’t just any old “gang’s all here Vegas getaway.” This, my friends, is a business trip. A business trip that juuuuuust so happens to fall on Sandoval’s birthday. Coincidence? I think not. I happen to think that LVP is JUST that amazing to suggest a TomTom business meeting that exact weekend. The woman’s a goddess, I tell ya. She is, however, a savvy businesswoman. She states that Tom and Tom better behave themselves “if they know what’s good for them.” Get ready to be disappointed, Lisa.

Meanwhile, LaLa takes Scheana to the recording studio, you know…for “moral support.” LaLa explains “I have been singing my entire life…but I am feeling now that I want to take music more seriously cuz it’s therapeutic for me.” LaLa further elaborates that her man doesn’t just make it rain with money…she works hard herself. Right.

Once LaLa is done “recording,” Scheana jumps on the opportunity to of course talk about herself. She explains the gossip that Jax has been spreading around town regarding her boyfriend, Rob. Scheana wants LaLa to be on her side…I mean, they even NAMED THEIR DAUGHTER…but LaLa is keeping it real with her and I love it. No one has ever told Scheana what’s up and that’s why I love LaLa so very much. Scheana better slow her roll or else Rob’s gonna be hiding out at Big Bear more often.

Packing for Schwartzie’s first “real real business trip” is hilar. I find it fascinating that Jax has weaseled his way into this. Last time I checked, the restaurant is called TomTom…not TomTomandJax. Once landed in Vegas, the crew starts boozing immediately. LVP is giving Tom and Tom the VIP treatment, Vegas style. Even though they are all pumped up, Schwartzie reminds us that, “I have been known to walk the line between business and pleasure…” and that “if this trip was a haircut it would be a mullet. Business in the front…party in the back.” Well said, Schwartzie. Well said.

Over in LA, the three musketeers Billie Lee, LaLa, and Scheana, hang for some drinks and girl talk. Scheana high jacks the convo and states that she is going to “make this about me cuz I tend to do that sometimes…” Once Scheana is (finally) done talking, LaLa proceeds to tell them about her upcoming performance showcasing her newly recorded jams. LaLa also surprisingly shares that she wants Stassi, event planner extraordinaire, to set up the evening. We also learn that James Kennedy will be performing at the show because….drama.

Anyone else think it’s interesting how amazingly Ariana and Katie are getting along together? It’s pretty awesome. Brittany comes to the suite with boobs and pregnancy test in tow. Buzz kill. She shares with the girls that she does not take birth control and that “ever since Big Bear I have not felt like myself.” I feel like this show is taking a turn in the direction of Teen Mom. Where’s Farrah? Leah? Amber, is that you? NEWSFLASH: The pull-out method is NOT a method. Someone get Dr. Drew to educate these people, please.

While the guys are slinging back shots, Brittany decides to pack up the birth control test and tuck it into her clutch, only to whip it out at the bar to show Jax the results, Maury style. I’m not sure if I am amazed by her brazen move to potentially bear Jax’s child or grossed out by the entire situation, pee stick in the purse and all. Alas, she is NOT pregnant. We can all stop holding our breath and start breathing again. No babies today, folks. Let’s get a round of shooters! #businesstrip

Stassi and LaLa meet up at the bar to drink sake…I mean talk event planning. I am noticing a trend here. Business meetings really just mean “let’s get wasted and SAY we are doing businessy things.” LaLa wants cocktails to match her showcase of songs and she wants it clear that it is “allllllllll about LaLa.” She is, however, concerned about having James Kennedy as part of this event. LaLa lets Stassi know that James CANNOT have a sip of booze, as this is a professional event. So profesh that Stassi is planning it.

In Vegas, the “business meeting crew” is chilling with robot bartenders, talking about sex, and gambling their lives away. Um. Where is LVP? The wheels are FALLING off of the TomTom bus and it’s heading into a collision with the hot mess express. Shockingly, the fellas are able to pull themselves together, throw on ridiculous ensembles, and head out to meet the lady boss over at State Restaurant Equipment. LVP explains that TomTom (the restaurant, not the dudes) will be industrial, sexy, and “now.”

They put together place settings and attempt to make a masculine-designed restaurant…which is difficult…considering Sandoval and Schwartz are Sandoval and Schwartz. Once LVP and Ken exit, leave it to Schwartzie to kill the professional mood with some jello shots. And the party doesn’t stop there. Back at the VIP suite, the gang gets together to celebrate Sandoval the birthday boy. Jax had to go and ruin everything by gifting Sandoval a guitar and we are all punished as Sandoval strums away. Thanks.

Someone please tell me why I am seeing a shirtless James Kennedy getting photographed by Ariana’s bizarre little brother Jeremy? SeeYouNextTuesday photo shoot? Of COURSE LaLa is there WITH Racquel (James’s girlfriend). LaLa lets everyone know that Scheana will not be an addition to the showcase, as she is tone deaf. She also lays into James and demands that he better not try to mess up her “baby.” Living on the edge, LaLa. How bout we just uninvite the guy?

Post Sandoval’s snazzy birthday dinner, courtesy of LVP, the restraint goes OUT the window and the shots flow, the confetti falls, and the birthday torches get lit in da club. TomTom is schwasted and before we know it, it’s 3:15 am.

As the sleeping beauties doze through the alarms (plural), LVP “christens” Vanderpump Rose as it is going to Cesar’s palace. Amazing. LVP’s becoming impatient, as her “partners” are late. Very late. When the duo finally arrives, LVP is not impressed by “their actions or their odor.” HA. Despite her anger, LVP whisks the guys away to Nick Alain’s design studio. Sandoval attempts to share his design aesthetic, but LVP doesn’t give a care. She shuts down the guys repeatedly and states that she “may need to redesign their role.” Sandoval, the style maven, is salty that they are making “design decisions” without them. Way to blow it, guys. This was SUPPOSED to be a “business meeting,” remember???????

TELL US – THOUGHTS ON THIS VANDERPUMP RULES RECAP & LATEST EPISODE?