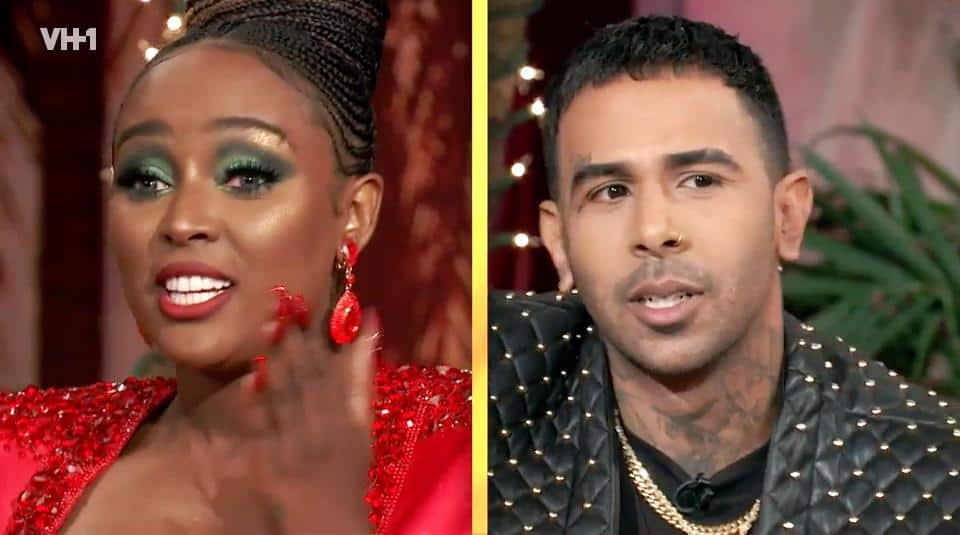 Last night the first season of Love and Hip Hop Miami officially came to a close with hour 2 of the reunion, but luckily for us, it packed enough drama to tide us over until we meet again.

Of course, host Nina Parker, had to start things off by clarifying the true nature of the relationship between Amara and Young Hollywood.

These two argued all season…well, Amara argued with him all season. But the first part of the reunion ended with him saying that Amara had come to his home with bedding, and slept in his bed!

Amara had warned him that putting it that way would give viewers the “wrong idea”, and she was pretty anxious to set the record straight.

As it turned out, it was all very innocent. Young Hollywood had invited Amara to his studio, which is next door to his home, and knowing Amara lived far away, he said she could spend the night at his place…on his air mattress, which was why she brought sheets and blankets. Well, that’s a little anticlimactic.

Young Hollywood said that he wasn’t trying to imply anything more had happened. He simply wanted people to know that he wasn’t the horrible guy that Amara had made him out to be, and that she clearly didn’t hate him all that much if she was willing to have a sleepover at his place. That’s fair.

But Amara said she still doesn’t like him, and being willing to spend the night purely out of convenience meant nothing, and she hasn’t gotten over his suggestion that she change her hairstyle AT ALL!

Hair seems like a petty reason to fight, but Amara wants to become a star on her own terms, and that’s valid. Except for the fact that her friend Veronica Vega outed Amara, and told the world that her signature Afro was actually a wig!

We got to the bottom of that too. Amara said own hair is an Afro, and she simply used extensions sometimes to add that glorious fullness.

She added that whatever she did with her hair was her business, and that she would wear it the way she liked, regardless of what anyone else thought. So, now we can finally put the whole hair/wig issue to bed, and hopefully never hear about it again…ever!

But Amara said that “colorism” is still a huge issue for AfroLatinas, like herself, and she’s been dealing with never quite fitting in her entire life. According to her, other Latinas often said  she was “too dark” to be one of them, and other black folks often classified her as “not black enough”, and she’s had it, and just wants to feel comfortable “being Amara”.

This was the perfect segue way into a conversation with  Veronica, and the freedom with which she casually tosses around the n word.

This issue has been addressed with Veronica before, and Trina had warned her that it  could cause problems.  But Veronica said that as a Latina, she’s a minority too.  In fact, last night she took it one step further, and said she “identified” as black, and had every right to use the word. Whatever you say, girl.

Another issue that needed to be clarified for viewers was the status of Trick Daddy and Joy’s marriage. The two have been separated for 4 years, and finally filed for divorce this season.

But despite agreeing to the divorce, and even throwing a party to celebrate it, Trick surprised everybody by stating that he wasn’t going to let Joy get away so easily after all.

His change of heart was mainly the result of realizing that Joy was happier  on her own, and was even dating again. Besides, he really loves Joy, and at least wants her to find a man “on his level”, which was a thinly veiled shot at Pleasure P, who Joy began dating casually earlier in the season.

When called out on his remark, Trick said P was a perfectly decent guy, but he doubted he could give Joy anything but pleasure in the bedroom, and she needed more.

Now, all of this begs the question: why did these two split up to in the first place? According to Joy, it was because Trick was “not the type of guy you could sit and have a real conversation with”, and I think we can all agree on that.

Pleasure P’s ex, Shay, was another person who was less than thrilled to see him and Joy together. She claims she doesn’t want him back, but that didn’t stop her from going off when she found out that Joy had told P that she was dating Scrappy.

Shay and P had already broken up, and she couldn’t understand why Joy would be talking to P about her at all. When she confronted Joy about it at Trick and Trina’s barbecue, the two women had argued viciously, and Shay had gone so far as to hit Joy.

The other cast members were on Joy’s side, and advised Shay to apologize. Which she did, although not particularly genuinely, after Trina called her “whack” and “pathetic” for fighting over a man who “didn’t even want her”.

Trick and Joy didn’t have the only contentious divorce this season. JoJo’s parents also decided  call it quits after years of living separate lives. JoJo found herself  stuck in the middle when both parents came to her for help during the court proceedings.

JoJo’s father refused to give her mother “another dime”, and her mother asked JoJo to testify on her behalf. Her father warned her that if she took her mother’s side, he would cut JoJo off financially, too, including pulling his funding for her boutique.

And he meant it too! JoJo did testify on her mother’s behalf, and she went to her store a few days later to find movers dismantling it and removing the merchandise.

JoJo reported that her relationship with her father had improved since then, but his relationship with her mother had not. According to him, he’ll never forgive his former wife for “going crazy” after moving to Miami, and spending all her time hanging out with friends, and making him pay for “boobies”, and other plastic surgery.

Well, viewers, that’s a wrap on season one. Oh, what a time we had! Let’s hope we get to see more of the Miami crew soon!