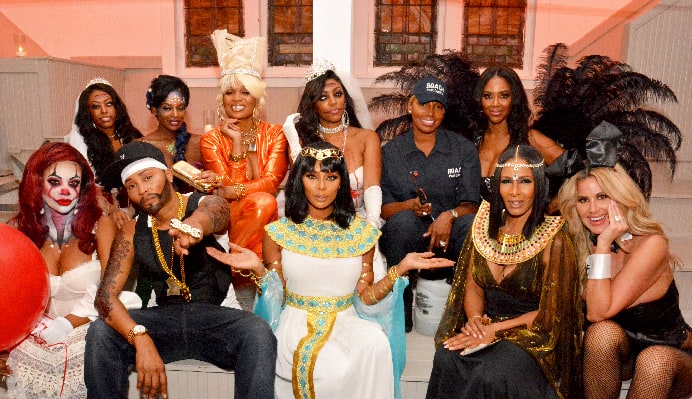 Last night, the 10th season of The Real Housewives of Atlanta came to a close, with…you guess it!… a party. And as you probably could have guessed, it didn’t go well.

But what party ever goes well for these ladies? Their track record is horrible! In 10 years, not a single party has been successful, and yet they just keep trying. Whether they’re optimists or gluttons for punishment is unclear, but either way, they should know better by now.

Last night’s occasion was a Halloween/birthday/welcome party for new cast member, Eva Marcille. Kandi offered to host the event, and while it was a very kind gesture, the fact that almost everybody was mad at somebody else, should have been a huge red flag.

Once again, most of the ill will was directed at Porsha. She just can’t catch a break! The other women seem to stay angry at her for one reason or another, and I used to think it was Porsha, but now I’m starting to think it’s really them.

She had a big event of her own last night: the debut of her starring turn in the stage production of “Two Can Play that Game”. She was really excited, but only Cynthia and Kenya showed up to support her…and even that was shady.

Kenya spent the entire time making snide remarks about the show, including saying that Porsha was “playing to type”, when her character was described as a “bona fide ho”. Ouch!

This seemed unnecessarily cruel. Kenya and Porsha are far from besties, but Porsha really seemed to be making a genuine effort to get along with everyone this season—even Kenya, so why trash her?!

Kandi, of course, is also angry at Porsha because of the accusations she made last year about Kandi, and her husband, Todd, planning to drug and rape her.

The allegation was preposterous and baseless, but technically Porsha didn’t start it…former housewife, Phaedra Parks did. She duped Porsha into believing the outrageous story, and was ultimately fired from the show, leaving Porhsa to hold the bag, and face Kandi all by herself.

These were very serious allegations, particularly for a mother and business woman such as Kandi, so her anger is justified. But  Porsha can’t help being gullible, which is exactly why Phaedra decided to use her in the first place, so it’s well past time for Kandi to let be bygones be bygones, but she simply refuses to do so.

When Kandi initially suggested the  party, she wanted to leave Porsha off the guest list, but Eva is new to the group, and Porsha had been nothing but kind and welcoming to her, so she  insisted on included her.

Porsha and Sheree have been close all season, but now even that’s gone south. Apparently, after Porsha left the Barcelona trip, she was upset and angry, and vented to her friend, Shamea about the other ladies, saying that she didn’t feel she could trust any of them, including Sheree.

Now, Shamea is a life long friend of  Porsha’s, and should have kept this information to herself. But she loves stirring the pot more than she loves Porsha, so, of course, she went running to Sheree to tell her what Porsha had said.

Sheree was understandably hurt. She was one of the few people who had Porsha’s back, and felt it was unfair for Porsha to say she couldn’t be trusted. Sheree decided then and there that she was putting the breaks on their friendship.

Porsha had no idea that Sheree was angry but with her. She’d been surprised that she hadn’t shown up to the play, but chalked it up to Sheree being busy, and went to the party completely unaware that she was about to be blindsided.

Porsha and her sister went over to talk to Sheree and Kim almost immediately after arriving, and Sheree took the opportunity to confront her about the things she’d said.  Porsha had no idea what Sheree was talking about until Shamea approached them, and fully admitted that she’d shown Sheree the texts Porsha had sent.

Porsha tried to explain that she’d been hurt by the way the other women treated her,  and that she felt that no matter what she said to them, or how hard she tried, it was never enough. But Sheree didn’t want to hear it. She said that she’d been a real friend to Porsha, and didn’t deserve to be spoken about behind her back.

Porsha’s sister, Lauren tried to defend her, but Sheree immediately shut her down, and told her to stay out of it. Kim also tried to jump into the fray, telling Porsha that you could always tell someone’s true character when times were hard. Porsha told Kim that she was the last one who should be judging anyone’s character.

It got pretty ugly after that, with the four ladies yelling and cursing at each other, as Shamea looked on in utter glee. Porsha, clearly feeling defeated, finally just walked away.

NeNe saw how upset Porsha was, and tried to figure out what was going on, but before Porsha could say anything, Marlo came over, and began trying to talk to Porsha, herself.

At first, it seemed like Marlo was trying to apologize for the part she’d played in their argument in Barcelona. After all, it had been all Marlo’s fault. She’d picked on Porsha incessantly that day, and finally Porsha had snapped. But now, Porsha was blatantly ignoring Marlo, refusing even to look at her, and if you know Marlo, you know she wasn’t having that!

When Porsha tried to walk away, Marlo followed her all over the party, pulling on the veil of her zombie bride costume, and trying to get a rise out of her. This went on for some time, until NeNe finally pulled Marlo away, and told her to leave Porsha alone.

NeNe then sat Porsha down, and tried to talk to her about the many issues she’d had with the other women. NeNe said that perhaps it was time for her to realize that the common denominator in those issues was her, and finally take responsibility for it.

This was pretty tough talk for someone who wore an exterminator costume, and forced her husband to dress as a giant cockroach in a petty attempt to show Kim that the “joke was on her”. So, it really came as no surprise when Porsha blew off NeNe’s suggestion that she gather all the women around, and apologize.

Besides, Porsha hates apologizing, and she’s done more than enough groveling. She was right when she told NeNe that the other ladies are “fake as f**k”,  and you know what? Maybe it’s  high time that they apologize to HER for a change! HAHAHAHA…that will never happen.

Stay tuned, viewers! Season 10 may be over, but the real drama is just getting started. The three part reunion kicks off next week, and from what I’ve heard, it will make the past reunions look like tea with the queen!

TELL US – WHAT DID YOU THINK OF THE RHOA SEASON FINALE?