Vanderpump Rules Recap: Kristen Throws Drink On James After Rumors They Hooked Up 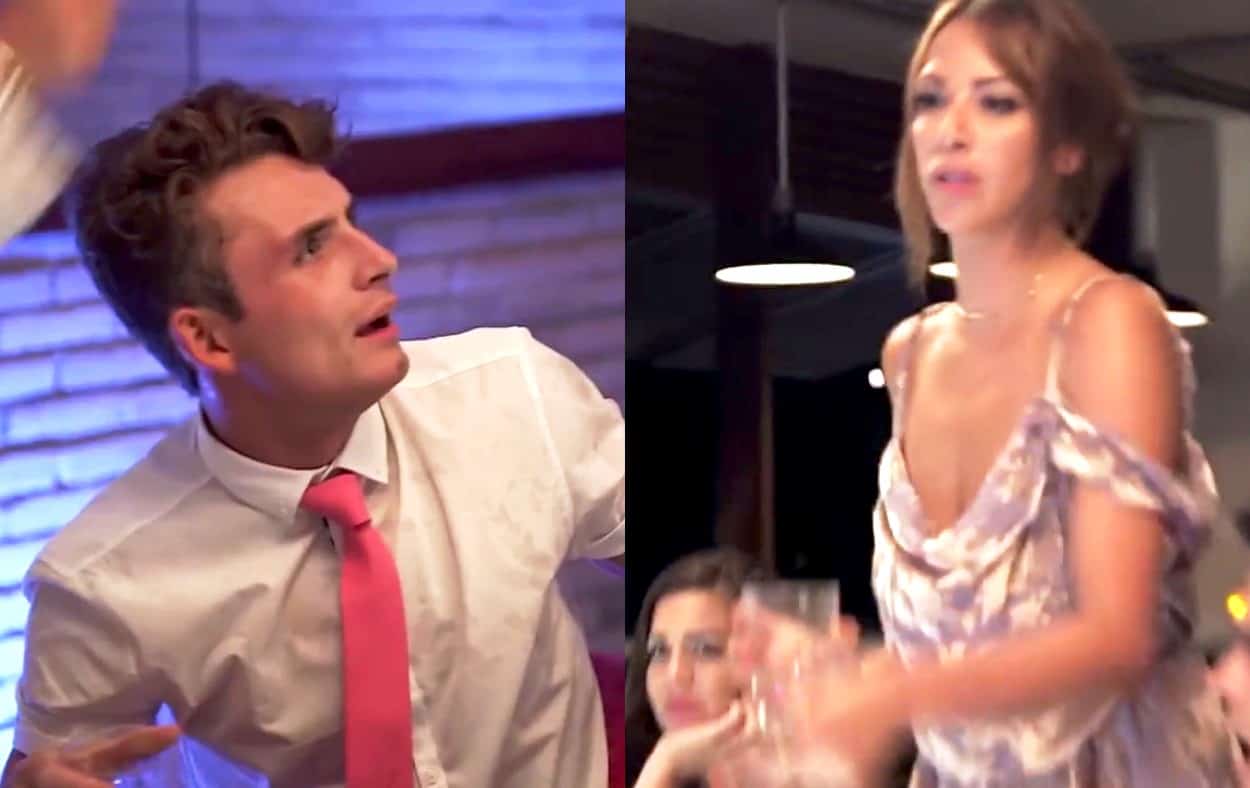 Playa Del Carmen….the sh*t show continues with a flashback to kick off this episode of Vanderpump Rules. I love when Bravo does that.

Twelve hours earlier…We left off with Jax storming away in da club, angry that Scheana would try to derail his (less than perfect) relationship with Brittany. In the meantime, a wasted James Kennedy weasels his way into the DJ booth…in fact, he has even deemed his 30 seconds of spinning “See You Next Tuesday: Mexico addition.” Jax believes James’s music is “just noise,” but does admit James is pretty good at getting the party turnt up. Even Kristen states he did a great job DJing. What are these people drinking? And where can I purchase their ear plugs?

Kristen is doing pulsating splits post James’s DJ stint and the exes get closer and closer over the course of the night, despite Kristen telling James their relationship felt like “a bad mushroom trip.” Later, the gang rolls out, but not before Jax shoves a bottle in his pants cuz that’s what you do when you hit your mid 30’s. DUH.

The next morning…Kristen is NOT in her bed…and OH SNAP, neither is James. Where oh where are the ex-lovers? Leave it to Detective Jax to Sherlock Holmes the hell outta this case. He fills Brittany in on the known facts. “Exhibit A: the crime scene.” Kristen is out in the pool area with James and a bottle of tequila. Jax walks Brittany through the events of the evening and finally gets to “the pillows are oddly arranged: the smoking gun.” So…what’s the real story?!

Over at the perfect palace of LVP, Ken brings her a new stray dog. Somehow, this conversation turns into a James Kennedy conversation. LVP compares James Kennedy to a stray dog because they are both “a lost cause.” I sorta see the connection…Too bad she isn’t making the actual DOG connection. I mean, James Kennedy has a GIRLFRIEND…yet was hanging out with Kristen late-night in Mexico. Hmmmm…

While lounging in the room, LaLa receives some roses from her boo and ya’ll know that Scheana is LIVID she didn’t get some flowers delivered from Rob. Scheana claims she doesn’t like presents…only affection. “She ain’t getting affection and she ain’t getting gifts.” LaLa, you have a point there. We are allllllll seeing through your perfect relationship, Scheana.

Peter, Jax, Sandoval, Schwartzie, and James all set out for a grown-up golf outing. Wait. Let me take that back. None of them have ever played real golf before and half of them are still absolutely wasted…and by half of them, I mean, James. He drunk drives his golf cart and gets himself into some serious hot water when Jax asks him, “Did you hang out with Kristen last night?” James responds with, “I mean a little bit, but not really.” Can we get a translation of what that means please? To further this case, Jax whips out his photographic evidence and back and forth Jax and James go.

“So we have two deflectors here…deflecting against each other.” Peter! This crew totally needs more Peter in their lives to help keep things real. James, realizing what is actually happening here, blurts out, “I have a sexy girlfriend who is about to be Miss USA.” James is drunk-girl crying while wearing a tie-died bandana and he hates everyone and I’m pretty sure this “rumor” has now spun out of control.

“Viva la Mexico.” LaLa and Ariana meet up with Brittany and Scheana once the girls finish their massages. The four of them try and piece together the night before, but no one can seem to figure out the Kristen and James situation. Kristen was apparently hanging around James all night and according to LaLa, once “it” entered “one of your holes,” it’s “easy to re-enter.” Oh boy…

While these morons are busy playing Inspector Gadget, LVP is doing work at the TomTom site. She is excited about the bar, but is a bit salty she is not in Mexico. LVP always tries to involve her husband, Ken, into the SUR drama, and he could care less. I wish more of the group would follow his lead…

And now we are back to where the episode kicked off. 2:13 pm. The three witches of WeHo, Katie, Kristen, and Stassi, are catching some rays on the beach and attempting to get the real story out of Kristen. Katie states that Schwartz told her that James said he hooked up with Kristen last night. Kristen wigs out and denies it completely and is super offended that her friends may believe this “rumor.” “Don’t you f*cking dare. Don’t entertain this.”

Let’s be clear here cuz I rewound the moment about 9 times when James was asked if they hooked up. “Did you HANG out with Kristen last night?” is a LOT different than “did you HOOK up with Kristen last night?” Ah yes, the good old “telephone game.” This is how a rumor spreads like wildfire…word of mouth and listening to only what you wish to hear. Wonder what all those idiots are doing as they watch this episode air…”Ohhhh. THAT’S what he said. Sorry, James!”

Unfortunately for Peter, he has to share a room with tanked Kennedy. James kinda comes to enough to sit up in bed and bash Jax. James tells Peter it is an absolute rumor that he and Kristen hooked up. I think these people should make a rule and just never travel with their exes. But then again, there would be no show left cuz all of these people are so intertwined with each other in some incestuous, crazy way.

Before dinner, James texts Kristen to let her know about the gossip. Kristen believes that James “started this rumor” as a “lame attempt to fit in with the guys.” Either way, Kristen is triggered and there’s no stopping an angry Kristen.

For dinner attire, Sandoval wishes to “amp up the night” by purchasing polyester SHORT SUITS for all the dudes, but he is salty when Schwartz and Jax don’t wear them. I feel like there are bigger issues brewing amongst this group. Kristen is seething almost as much as Sandoval is because his boys backed outta the suit plan. Sandoval makes a lame toast about TomTom, but the only toast I really wanna hear is Kristen’s. The girl jumps right in and calls out James Kennedy and demands the truth.

After taking jab after jab from Kristen, James shouts, “Alright you know what, Kristen? I don’t give a sh*t. Kristen, shut up, you’re an attention seeker!” And from there…Kristen throws her drink on James, causing absolute havoc to ensue. Now THIS is the Vanderpump Rules group I have grown to love so much over the years. Keep up the good work, guys!

TELL US – THOUGHTS ON THIS VANDERPUMP RULES EPISODE? DO YOU THINK JAMES AND KRISTEN HOOKED UP?