Vanderpump Rules Recap: Jax Has an Epic Meltdown In Front of Lisa 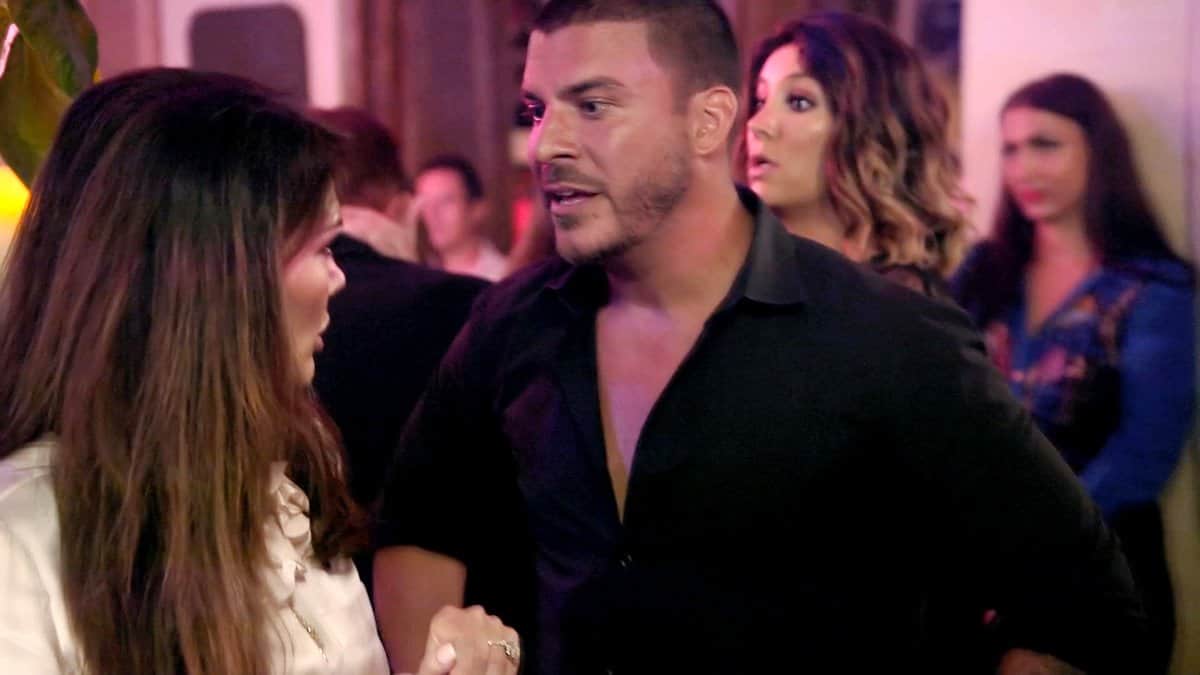 Isn’t it ridiculous how far this stupid miscommunication involving James and Kristen has gone? Leave it to the Vanderpump Rules cast to mishear, misinterpret, and misbehave at the most inappropriate times.

In case you all forgot, last episode left off with Kristen throwing a drink on James while out to dinner the last night in Mexico. She was beyond angry that James was spreading rumors (although he never technically did: check the videotape) and allowed her emotions to get the best of her. However, no one is happy. The dinner took an abrupt turn for the worse and even Kristen’s own friends are turning on her. See Katie: “I don’t know if Kristen just enjoys the attention…but I can tell you that it’s life sucking and a total waste of energy.”

At least Stassi attempts to approach LaLa, an innocent bystander who just so happened to be sitting too close to James (coincidence?) and also received some of the drink throwing from Kristen. LaLa is absolutely triggered and if I were Kristen, I would run. Run far and fast.

Meanwhile, a soaking wet James is drunk crying on the phone with Raquel…remember her? His girlfriend? Sandoval and his bedazzled pinkie ring goes to check on James who sob talks and makes zero sense. Not surprising.

Since it’s their last night in Mexico, the gang has decided to “turn up,” Jax’s words, not mine. It’s hard for an old man to try and stay hip and happening, ya know? While everyone else is throwing back test tube shots, LaLa , her GD baby bottle, and James stick together and discuss the evening’s antics. LaLa states she will always have James’s back because “Dude, we’re like Em and Doctor Dre.”

Katie pops in to check on Stassi and Kristen back in their hotel room. Kristen is being overdramatic and Katie lets her know that her behavior is “… a little like Jerry Springer right now.” HA. I love it. I am so proud of Katie for telling Kristen how it is. You are certainly not the victim here, Kristen.

The next morning, Jax kicks Brittany out of the room to facetime Kelsey, the Reiki master. I crack up every time Kelsey refers to Jax as Jason. Like, who is that?! Jax/Jason hangs on every word that his Reiki master spits out, which is a whole lotta BS. I mean, come on. Do you really think Jax can follow your Nelson Mandela reference?? Gimme a break, Kels. BTW: Anyone else catch the “love ya” at the end of their convo???

Meanwhile, everyone else packs up and preps to head back home…but don’t worry, the gossip will follow and follow fast. Once landed, Kristen heads out for a date with her boyfriend Carter and it’s amazing to watch her try and break the news of the rumor to him. Carter states “dude, you’re p*ssing me off right now.” Carter can’t trust Kristen because she is a slime ball (and has hooked up with James in the past), but he also insists that he will be having a chat with Sandoval since Kristen pretended that Sandoval was the number one rumor spreader. Keep stirring that pot in hopes of getting out of the hot seat, Kristen. It’s not working.

Back to “work” they all go. LVP is happy to see her staff, although she is terrified of LaLa’s new lips. LVP asks about the trip and LaLa wastes no time filling her in on alllllllll of the drama. LVP is not surprised by any of it, yet keeps asking and keeps hiring these crazy kids. Go figure.

On the way to work, Jax is heeding Kelsy the Reiki master’s advice regarding decision making. When Brittany asks him about his job offer, Jax makes it clear he has not made a decision yet. Like Kristen, Jax likes to dodge the hot seat by bringing up other aggravating issues that have nothing to do with anything. For instance, Jax asking, “Is your boyfriend gonna be there[at work], Adam?” Ah yes, Jax’s little jab. Someone is jealous of Adam, huh Jax?

“Pucker and Pout” is back ya’ll! Katie’s beauty based website is returning after a small hiatus and naturally, party planner Stassi will be in charge of prepping the party. The party planning soon turns to the topic of Kristen. The girls + Schwartzie all agree that Kristen is being absolutely ridiculous about this whole scenario. Everyone also agrees that it isn’t a good look for Kristen and James. Those two have to make better choices. Man, how bad is it when Stassi , Katie, and Schwartzie are the reasonable people?

WHILE HE IS WORKING, Jax decides to confront Adam, the SUR barback who has the “hots” for Brittany. Jax is livid that this dude is “showing his face” at the public restaurant when “he is not even scheduled to work. That’s ballsy.” Is it though? Jax comes right out to Adam and says “you have a crush on my girlfriend?” and Adam answers with “No. Not at all.” So much for your matchmaking skills, Scheana. Anyway, Adam lets Jax know that Scheana was trying to set him up with Brittany WHILE HE WAS AT JAX’S HOUSE. Adam makes it very clear that he doesn’t like Brittany, but now Jax is angry at Scheana for being so shady. Watch out, Scheana. “The Jax train is coming.”

The See You Next Tuesday party is lit. Ariana is dancing on the bar, the girls are all cut, and now everyone can rage to the music…not like they were working before. WHO IS RUNNING THIS RESTAURANT?! Jax makes a beeline for Brittany and I know he’s really mad because his eyes are doing that crazy pop out thing. Quick! Someone call Kelsey the Reiki master. He lets Brittany know that he does not appreciate Scheana’s meddling, especially since Scheana was trying to break up a “happy” home while Adam was legit in Jax’s house. What a mess.

There are so many fires within this group. Everyone is throwing everyone under bus after bus and when Jax seeks out Scheana, he explains that “the woman can’t even keep a husband, but she’s gonna tell me how to run my relationship?” Once Jax feels as if he got his point across to Scheana (ie: don’t try to hook Brittany up with another man), he bumps into DJ James Kennedy and his sidekick Dr. Dre, I mean LaLa. Despite recognizing Jax’s crazy eyes, James lets Jax know that he does not appreciate him spreading the Kristen rumor back in Mexico. And here we go.

Jax starts screaming, LaLa tries to shut him down, and LVP walks in at the very moment Jax yells, “f*ck you all, you lying sacks of sh*t.” #Timing. There’s no stopping Jax’s irate tangent. He is magenta, sweating, and shrieking profanities in front of his boss all because James Kennedy said he was angry with him. LVP is so over Jax and his inappropriate behavior at her restaurant. She tells Jax, “What’s coming out of your mouth is of no interest to me” and this pushes Jax to a double-bird flipping move. Never a wise idea to flip the bird at your boss. LVP states to Jax that he’s “…arrogant and obnoxious…and I don’t like what I’m hearing. Leave now.”

An absolutely infuriated Jax storms away and all I wonder is, what would Kelsey the Reiki master say to Jason now?

TELL US – THOUGHTS ON THIS VANDERPUMP RULES EPISODE? SHOULD LISA FIRE JAX?!