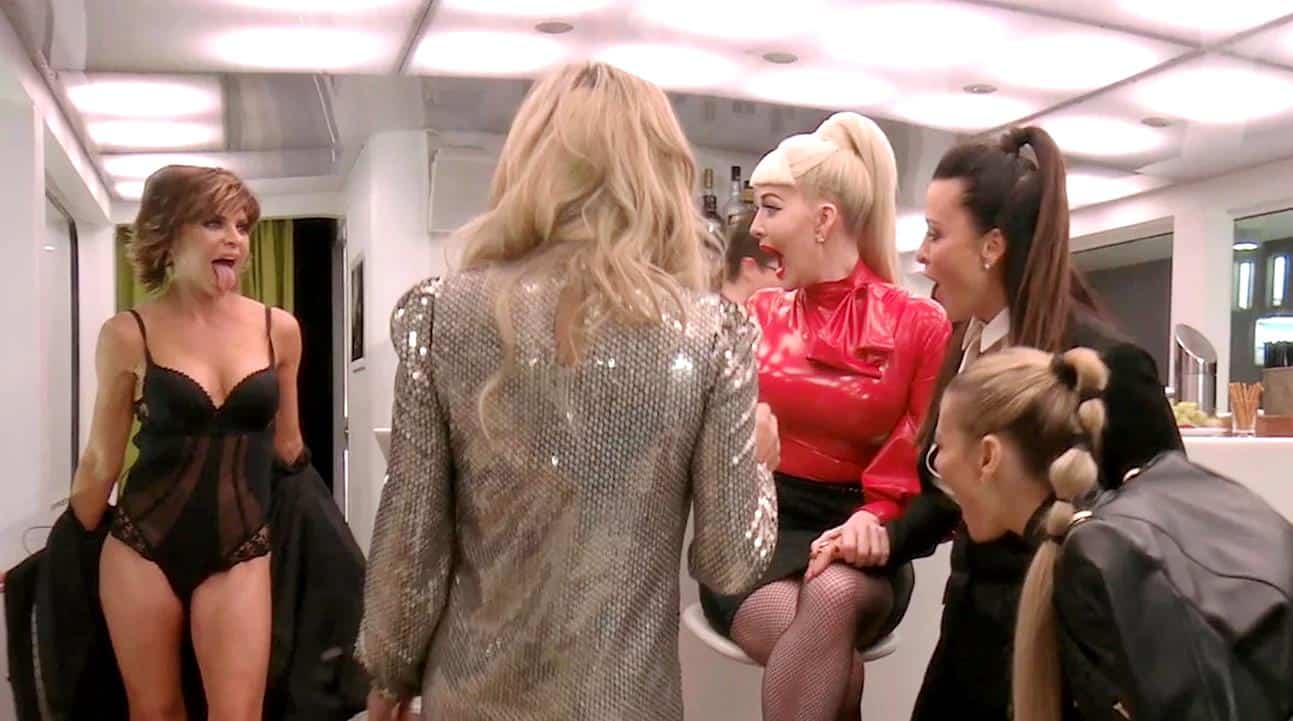 Somehow the Real Housewives of Beverly Hills are STILL in Germany and STILL causing havoc …even though LVP, this trip’s biggest drama queen, has already headed home to the US.

The episode opens up with some serious moaning and groaning produced by Rinna and Dorit. Their sounds make it very clear what time of relationship these ladies have with their husbands. Just joking. Kinda. While Dorit and Rinna enjoy a little time away from the group, Teddi and Kyle wait…and wait…and wait for Erika. They have plans to go to the zoo for the day, but alas, Erika is late because really, what type of ensemble does one wear for the zoo? Even Kyle is onto her antics. “Is Erika getting glam for the gorillas?” An hour later, Erika rolls up and explains that the reason she is so very late is because she is “sick.” Yea right, girl. We allllllll know that Mikey, her creative director, was having a moment (or 60) and just couldn’t find the right outfit for the outing. Sigh.

Erika did prepare to get a special tour of the zoo, so some dude takes Kyle, Teddi, and Erika around animals in a few “super private” areas. Ok Erika. We get it. You’re loaded and paid oodles of money to have a tour guide bring you in the “backstage” area of the ZOO. I’d rather save all that cash for the spa day…although I am not quite sure how Dorit and Rinna ever relax since all they do is talk, talk, talk.

Later in the evening, Teddi explains that Kyle has become her fashion expert. To prepare for the evening’s boat cruise with all the ladies, Kyle does Teddi’s make-up. It’s such a middle school friend move, but it’s nice to know that new friendships can be made even in the middle of chaos and drama.

The gang is stuck waiting for Erika, yet again. Something tells me that she is “just preparing her next Erika Jayne fashion moment.” Rude pants seems to have forgotten her manners on this trip, since she has now made her friends wait…twice. As Kyle, Dorit, Rinna, and Teddi wait for the arrival of Erika, they throw back champagne in the van and smooth over any final issues amongst the group…mainly the one between Dorit and Kyle. These ladies are starting to understand that they are “…at the crux of a really great friendship,” so Dorit should just stop bringing “… up all these stories to try to confuse people and deflect.” Because the clock is ticking and the boat is waiting, the van crew decides to head out boat-bound and leave Erika to find her own way once she gets dressed.

It turns out that Erika is late because she was stuffing her body into a red latex blouse and ya know…“lube and the baby powder. It’s like the perfect storm.” The main question I have is…WHY? My favorite part of the episode is when Erika exits her cab and struts her stuff to meet up with her pals on the boat…and then almost gets taken out by a man on a bicycle right by the pier. Confession: I rewound a few times.

Once on the boat, Erika is a bit salty and I would be, too. I mean, have you ever worn a latex blouse before? Yea, no. Me either. But I imagine that it would be very uncomfortable…and I imagine she is just slightly annoyed that the women left her. Now that everyone’s together, the night can officially begin.

Post sunset boat cruise, Erika takes the girls down a dark, graffiti-covered alley in downtown Berlin to some sort of “in the know” speakeasy. Erika explains it is an “invitation only restaurant” and the best part of the place is the host and his mushroom cut hair-do circa 1993. I love it. It couldn’t be a RHOBH dinner without hearing the phrase, “I have one issue.” Erika is stirring the pot and this time, it’s the “pretend amnesia” debacle with Teddi. Like. WHY. Erika decides NOW is the time to bring up her issues (AGAIN) with Teddi.

As Teddi stutters, gets teary, and defensive, Dorit completely interrupts Teddi and states point blank that Erika scares Teddi. Upon hearing that bit of information, a stone-faced Erika suddenly turns into a softie and wants to wipe the slate clean with Teddi. Wait. What the heck just happened? It appears as though this Berlin trip ends on a high note and I even caught a few of the women eating DESSERT. They’re really going crazy.

Now that the trip is over, the girls are back to “business as usual” in Beverly Hills. LVP preps for her “compassion award at LA Awareness Festival” for her Youlin documentary and Dorit pretends to be a business savvy human being. Kyle is experiencing a different type of business as she dives right into packing up her old house. She is emotional about leaving the house she lived in for the past 8 years, but let’s be real Kyle, you’re moving onto bigger and better.

In the midst of the move, Kyle finds some time to head over to LVP’s castle and catch up. LVP shares that she was awarded for “compassion” at the LA Awareness Festival, which makes Kyle roll her eyes because we ALL know how compassionate LVP is toward humans. HA. LVP asks to hear about the rest of the Berlin trip once she left and of course Kyle fills her in. Kyle explains the highs and lows of the boat cruise and dinner. She admits that it seems like any drama she has with Dorit is now a thing of the past, but makes it clear that “Dorit keeps talking out of her a*s, while trying to cover her a*s.” That just sounds exhausting.

Ever the traveler, Erika Jayne is in NYC to perform. She wastes NO TIME getting away from her husband whom she loves dearly (lol) and hurries off to sing at some dank club in the city. Erika explains she loves performing, but “being a club performer ain’t glamorous” even though “every show is like the super bowl.” Hilarious.

Back in LA, Dorit and PK meet with the event planner who is in charge of setting up Dorit’s fashion show. She is debuting her swimwear line, Beverly Beach, and is fa-reaking out rather dramatically because…that’s Dorit. PK tries to let Dorit know that everything will be fine because with loads of money everything will always be fine, but that doesn’t stop Dorit from being rude and childish to the hired help. This fashion show is definitely going to be a show alright…but I am thinking more of a sh*t show…

TELL US – THOUGHTS ON THE LATEST RHOBH EPISODE?