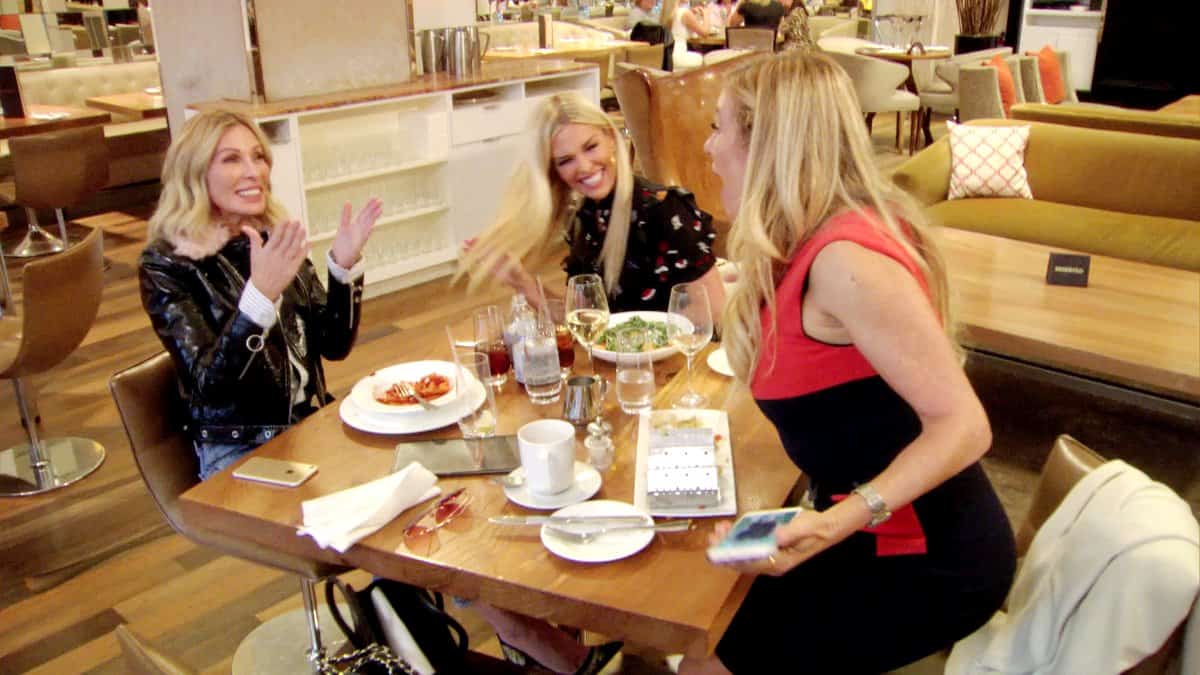 On last night’s episode of the Real Housewives of New York City, Carole ran the NYC Marathon, and as impressive as it was, the 26 miles of running was nothing compared to how much talking the women did!

They pretty much hopped around the city in different sets of twos or threes, and talked mad trash behind each other’s backs..for almost the entire hour! And you know what? It wasn’t half bad.

First up was Carole, Tinsley, and Ramona. They met for lunch and a debriefing of Dorinda’s Halloween party, and had some choice observations to make about their “friends”.

Carole said she thought that Luann’s Diana Ross costume definitely crossed the line into black face, and felt it was enormously inappropriate. Ramona defended Luann, saying that while she was wearing darker makeup (the literal definition of black face), she wasn’t trying to be inappropriate.

The talk quickly moved to Luann’s divorce. Tinsley wondered if Luanne even cared about Tom, since she hadn’t been very vocal about it, and didn’t bring it up at all at the Halloween party.

Carole said that Luanne had been much more concerned about getting attention about the divorce than the divorce itself, because she may not have brought up Tom’s name at the party, but she’d quickly pounced on Carole about not calling to check on her.

Ramona had also felt attacked at the party, but she sort of brought it on herself by hating on the location of Bethenny’s newly purchased investment property. Her comments had come across as snobby and unkind, and Bethenny had rightfully called her out.

Bethenny said that Ramona was simply hopeless, and suffered from “moronopathy”, which could only be cured by an “ imbecilectomy”. She said the best part of her night had been hanging out until dawn with Luann. And yes, Luann wore the six foot Afro wig the entire time.

Dorinda was also shocked by Luann’s choice of costume, and said it crossed the line, but ironically, Bethenny’s defense was similar to Ramona’s. Luann “wasn’t being inappropriate”, she was “just being Luann”.

It was a busy day for Dorinda. She also met Sonja for a walk in the park. This was an odd pairing, because Dorinda doesn’t really like Sonja. Of course, none of these women seem to like each other all that much, so I guess it made sense in an odd sort of way.

Sonja talked about herself a mile a minute, and Dorinda walked alongside her in eye rolling silence, until Sonja brought up Tinsley moving out of her townhouse, and acting as if she hadn’t enjoyed living there.

Dorinda tried to explain to Sonja that she just came  on too strong, and that while she may have been trying to offer Tinsley guidance, it came off as judgmental and critical at times. She added that Tinsley was happy living on her own in her hotel suite. And really, who wouldn’t be?

Sonja didn’t like hearing this, and began to judge and criticize Tinsley, saying that her ex boyfriend, Scott, was surely paying her exorbitant $9,000 per month hotel bill, because she certainly couldn’t afford it on her own.

Dorinda said that she really didn’t think Scott was paying for Tinsley’s suite, and that if she needed help, her family had money, and could pay the bill.

Sonja said that Tinsley’s family didn’t have that kind of money, and Tinsley had always relied on men to pay her way. Dorinda quickly shut the conversation down at that point, and told Sonja that they would all be together at Ramona’s party in the Hamptons in a few days, and she needed to behave herself around Tinsley.

But for someone so sensitive to other people’s judgements, Tinsley sure has plenty of her own. When she met up with Luann, she was downright rude to her.

Now, to be fair, Luann began the lunch by giving Tinsley relationship advice, and I mean, come on! So, you couldn’t blame Tinsley for getting a little rankled.  Tinsley brought up Luann’s short marriage, and said that it was hard to sympathize when Luann wasn’t opening up to them about her divorce.

Luann said that she was really all talked out when it came to Tom, and really just wanted to move on. But Tinsley couldn’t have that. She said that Luann had brought Tom into their lives, and it wasn’t fair to just drop it now. Luann suggested that everyone get their own life, and stop worrying about hers.

Tinsley then pointed out that Luann expected more from her friends than she gave them, and cited her argument with Carole at the Halloween party as proof. Luann had been angry at Carole for not calling her, but  she hadn’t reached out to Carole after her breakup with Adam.

Luann said that a breakup and a divorce were NOT the same thing, and that Adam had been nothing but a boy toy for for Carole anyway. Tinsley disagreed, saying that Carole and Scott had been together longer than she was married, and were probably closer than Luann and Tom were. Sheesh..get this girl a snickers bar!

But after all of that, Tinsley still wasn’t finished. She wanted to know why Luann had gone back to calling herself “Countess”. Luann assured Tinsley that she’d never stopped calling herself Countess, and never would. After all, she said,  Queen Latifah wasn’t a real queen, either, and no one had a problem with that. Hmmm..could it be that deep down Luann just really wants to be a black woman?

In the meantime, Dorinda made time to take another walk..this time with Carole. When she mentioned her earlier walk with Sonja, Carole expressed surprise that she would spend any time at all with Sonja, especially since she’d said Dorinda “looked fat” at her Halloween party. Who tells someone that?! It’s just stirring the pot!

But Dorinda wasn’t phased at all, and when she had lunch (AGAIN) with Tinsley, she not only told her about Sonja’s nasty comments about her weight, she told her how horribly Sonja had talked about her.

Tinsley was hurt to hear that Sonja would say these things about her. She told Dorinda that she wasn’t very confrontational, but needed to speak to Sonja about her gossip and lies, and made her promise to have her back when she did.

So, it sounds like everyone is sufficiently riled up for the Hamptons, and this party is going to get pretty interesting. Scenes show an argument between besties, Bethenny and Carole, and a pretty vicious showdown between Dorinda and Sonja. Stay tuned!

TELL US – THOUGHTS ON THE LATEST RHONY EPISODE? IS SONJA JEALOUS OF TINSLEY? WAS TINSLEY OUT OF LINE FOR QUESTIONING LUANN?