The Real Housewives of New York Recap: The Deluded Morgan 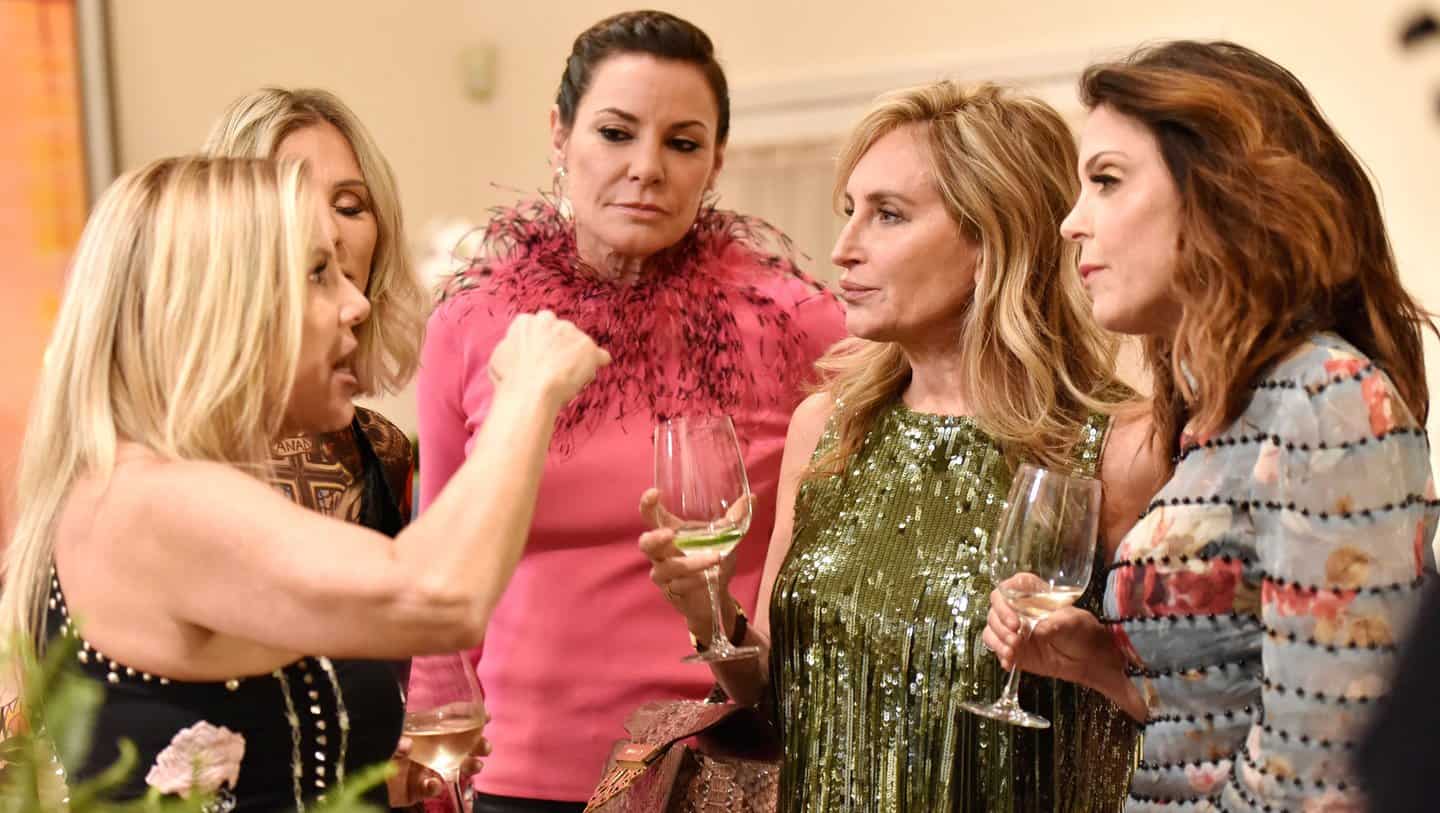 If I had to sum up last night’s episode of The Real Housewives of New York in one word, it would be Sonja. The entire episode was about her…her feelings, her actions, what she said, how she said it…and just like the woman, herself, it was exhausting!

When we picked up with the ladies, Sonja was still getting chewed out by Dorinda for comparing her divorce to Dorinda’s husband’s death.

It was insensitive, to be sure, and Dorinda went OFF! She said that Sonja’s husband left her by choice, after she cheated on him, and that her husband’s death was a tragedy, and if he were alive, they’d still be together.

Sonja insisted that she’d never cheated on her ex, and was devastated after 12 years because he had been her best friend, but was now as “dead to her” as Dorinda’s husband.

It was all just too much. Dorinda walked away, literally shaking with anger, saying that she didn’t think she’d be able to associate with Sonja anymore, and couldn’t possibly attend Ramona’s dinner party, if she was going to be there.

Luann made a plea for Dorinda to have compassion for Sonja, and explained that Sonja hadn’t been trying to be malicious place, but Dorinda wasn’t buying it for a second, and she was right not to,  because when Ramona told Sonja she should apologize, she said she didn’t feel she had done anything wrong.

News of the blow up quickly made it’s way across town, where Bethenny was showing her new rental property to Carole and Tinsley. After talking to Dorinda, both Tinsley and Carole agreed that Sonja had lost her mind.

But Bethenny tried to see the  argument from Sonja’s side. She figured a loss was a loss, and that it didn’t do anyone any good to try to one up each other in the heartbreak department. Besides, she said, knowing your ex was out in the world somewhere was it’s own special kind of torture.

In the end, the ladies convinced Dorinda to go to Ramona’s party, since it was in honor of Carole finishing the NYC Marathon…sort of.

One of the best and most awkward moments of the party came when Luann, seated across the table from Bethenny’s boyfriend Dennis Shields, asked him how he and Bethenny had met. Prompting Bethenny to tell her, “You know how we met, or at least you think you do.” Cue up the genius flashback from the producers showing Luann accusing Bethenny of having an affair with a married Dennis during a previous reunion. The looks and awkward silence that followed was PRICELESS!

The party was lovely…great food, great wine, a veritable who’s who of the Hampton’s…but Carole was disappointed that it didn’t really seem to have a “marathon” theme, or really any theme, at all. Oh wait…yes it did. The theme was Sonja.

She dominated the entire evening. From the  moment she arrived, she was either talking, or being talked about. She made a beeline for Bethenny, and told her that she’d had a good cry earlier in the afternoon, and went on to tell her about the argument from her side, which was that Dorinda just went off on her out of nowhere.

Then she moved on to Ramona, whom she scolded for not defending her during the argument. Ramona basically told her that her behavior had been indefensible, and that she wasn’t going to fight her battles for her.

As they spoke louder and louder, Tinsley and Dorinda overheard them from a few feet away, and Dorinda suggested that it was the perfect time for Tinsley to confront Sonja about the things she’d said about her.

At first, Tinsley said she didn’t want to gang up on Sonja, and would prefer to talk privately. But Dorinda egged her on. Apparently, she was dying to punish Sonja.

By the time everyone sat down to dinner, the tension was palpable. Ramona had changed the seating arrangements so that no one who had issues with Sonja had to sit near her, and she ended up relegated to the corner of the table with the non Bravolebrity guests.

When  Dorinda overheard her mention her relationship with Rocco, she spoke up  loudly, and said “you’re not dating him”!

Sonja was taken aback, and when she asked Dorinda to repeat herself, she happily obliged, and went on to taunt Sonja, saying “liar, liar, ho on fire!” in the singsongy voice favored by 1st graders around the world.

Most of the other ladies seemed to think this was taking things a bit far, and began telling Dorinda to simmer down, but Tinsley must have been inspired by their earlier conversation, because she looked squarely at Sonja and said “you lie all the time”!

Sonja seemed to find this humorous, and asked Tinsley what she was talking about. Tinsley told her that she didn’t appreciate Sonja telling Dorinda that her ex-boyfriend, Scott, was still paying her bills.

Sonja boldly told Tinsley  that she believed Scott WAS still paying her bills, and when Dorinda interrupted to ask Sonja if she believed that Tinsley had actually paid for the $5k gift card she gave her, Sonja said flat out that she did not.

The other ladies tried to diffuse the situation saying it made no difference where anyone got their money, and that it wasn’t none of anyone’s business.

But Tinsley was too far gone to stop. She said she was going to write Sonja a check for the amount she would have paid if Sonja had charged her rent while she was living in her house. Sonja asked if the money would be coming from “Scottie or Mommy”.

That did it! Tinsley yelled “shut your mouth, and shut your f***ing legs!”, and walked out to get her checkbook. When Tinsley returned, and slammed down a check for $8k dollars, Sonja said “I don’t want your money; I want your love”. As you can imagine, this last statement elicited groans that were surely heard all the way back in the city.

Someone needed to put a stop to this and fast, so Bethenny stepped up. She casually grabbed the check, and set it aflame with a candle. The others looked on in shock, but it broke the tension, and soon everyone was laughing.

It would have been a great time to end the party, or at least leave well enough alone, but that just wouldn’t be Sonja. She asked Dorinda to have a private chat, and surprisingly, Dorinda agreed.

Once they were alone, Sonja started talking a mile a minute, trying to justify herself..she was having an “off day”, she’d stopped taking her anti depressants, she wasn’t taking hormones, and her marriage had been “beautiful”,  and her divorce really was “like a death.

But apparently she hadn’t sobered up by the following morning, because she sent a venomous text to Ramona, saying she was done “wasting time” with her, and calling her an “unfeeling POS”.

Ouch, right?! It seems a simple ‘thank you for having me last night. Had a great time time!’ would have sufficed. But that wouldn’t be Sonja.

One more painfully awkward meal was in order before the ladies left the Hamptons, so Tinsley and Carole hosted a brunch later that morning, and once again, deciding where to seat Sonja was difficult.

Tinsley and Carole, unaware of the text Sonja sent to Ramona, seated them across from each other. They refused to speak, or even look at each other, and finally it got so uncomfortable, that Ramona decided to move.

She tried to be slick, and act like she just needed to talk to Tinsley. But come on, it’s Ramona! Everyone knew exactly what she was doing, and demanded to know why she’d left Sonja.

Sonja and Ramona began bickering about the text, and since everyone was already angry with Sonja, anyway, they easily took Ramona’s side.

Sonja began with her litany of excuses again, but the ladies shut her down, telling her she needed to stop talking so much, and listen, and that she sounded like a “broken record”, and needed to “get current”, and  deal with what was really bothering her.

The show ended there, but Sonja’s not done yet (is she ever?!). Scenes for next week’s episode show things getting even uglier between her and Ramona. And in non Sonja related news, Luann will cross paths one of Tom’s many ex flings. Stay tuned!

TELL US – THOUGHTS ON THE LATEST RHONY EPISODE? IS SONJA DELUSIONAL? WAS LUANN TRYING TO BE SHADY TOWARDS DENNIS? DID TINSLEY AND/OR DORINDA OVERREACT?