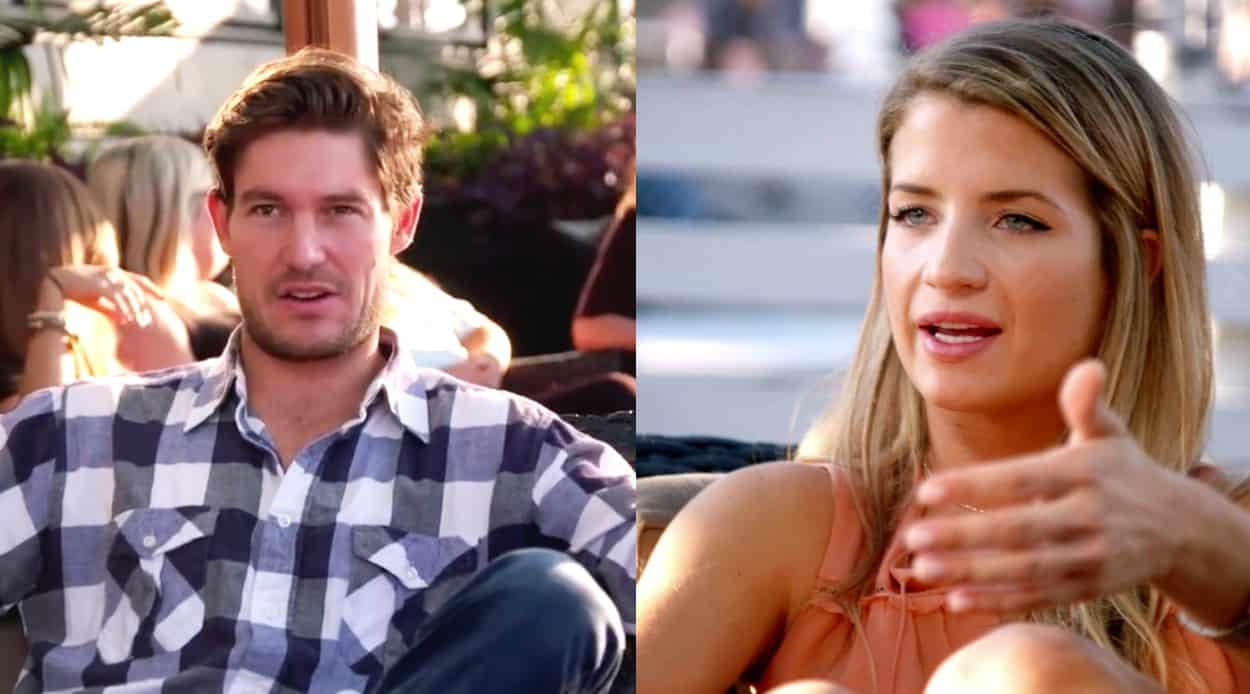 Seeing the Southern Charm gang in their natural habitats is mind-blowing. The things these people do to try and “seem normal” are hilarious.

Take for instance Patricia’s shower gift to Cameran. Patricia gave Cam a human. This human is Michael, Patricia’s butler…or servant…and he was loaned out to pregnant Cam for a bit. Hell, I would suck it up and have a friendship with Patricia if it meant I could have a man on hand to give me foot massages and bring me paper towels. I mean, the guy is an absolute doll and does everything with a smile. How is this real life?

Over at casa-de-Craig, he is busy FaceTiming with his parentals. They ask questions about his sewing and try to keep a straight face whilst doing so. They also talk about Naomie. Craig says he is trying to figure out what wrong with Naomie and also shares that he “had an Uber the other day and the guy told me his real job was a life coach.” The fact that Craig is legit considering ringing up the Uber life coach seems absurd, but not far from something that Craig would actually do.

The blue jacket twins, JD and Thomas, meet for some drinks and the entire segment is absolutely cringe-worthy. Thomas pries and tries to find out what is going on between JD and Elizabeth. JD states that he and Elizabeth are “staying friends” and it is a “complicated thing” because he has four children with Elizabeth. Thomas advises to be “cognizant and respectful” of the children and then the two men chuckle for far too long about taking and giving advice. Woof.

A make-up-less Kathryn phones (on her cracked screen) Cam to hear all the details about the baby shower she wasn’t invited to, courtesy of Patricia. #PettyPatricia. Kathryn then shares that she asked Thomas’s girlfriend Ashley to LUNCH and Cam takes the words right out of my mouth: “that takes some balls.” You can say that again!

Later, Shep meets up with Peyton Pritchard, a “friend” of his (aka an ex) who just recently moved to Charleston. Shep believes that he can still remain friends with anyone he has ever dated, but it doesn’t seem like Peyton feels the same way. In fact, she has already hung out with Austen in what seems like a total “Netflix and chill” type date. Upon hearing this, Shep states, “Well, never mind. You’re off to the races.” To say Shep is salty is an understatement. He is fully marinated and annoyed that he always “gets the girls on base,” but never “knocks them in.” Always the bridesmaid, Shep…

The next day, awkward date 2k18 begins between Kathryn and Ashley, Thomas’s new girlfriend. As soon as Ashley sits down, she asks Kathryn, “Are you gonna do a cocktail?” No, Ashley. Kathryn is sober, so way to go. You’ve really set the bar low for this meeting. Ashley is terrified of Kathryn and I don’t blame her. Kathryn and her 5’11-self could potentially just squish her with one small stomp. Ashley over-shares about how her relationship with Thomas happened and states that the first time she had an “interaction” with Kathryn’s children was on Mother’s Day… “Per our agreement, Thomas is not allowed to introduce our children to any romantic prospects.” Although we all know she is about to blow up, Kathryn remains relatively calm while talking to Ashley. This date seems to go much smoother than I think either party thought.

Chelsea heads out to hang with her dad, Ken. She explains that her parents are divorced, but have remained friendly. Chelsea and her father are the exact same person as they chill on the beach throwing back beers and ripping tequila shots. Just your average father/daughter catch-up sesh. All joking aside, Chelsea does share with her dad that she is starting to get nervous about getting older and not being a married mother. Her dad retorts that, “Not everybody’s meant to be married, and not everybody’s meant to have kids.” Man. Keeping it real, pops.

Meanwhile, over at Thomas’s house, Ashley shares the outcome of her lunch with Kathryn. She states that she left lunch “pleasantly surprised” and says that Kathryn was “very friendly and very kind.” Thomas is heading out for boys’ night and Ashley claims she gets nervous about him going out with his boys cuz he is “such a stud.” What is Thomas putting in her cocktails!?

Girls’ weekend, ya’ll! Kathryn set up some fun with her new “girlfriends.” The girl squad is slowing arriving and we all know that this ain’t an average “girls’ night.” It’s more so a b*tch fest, especially because Naomie just arrived, Queen Sh*t Talk herself. Naomie STILL won’t drop the whole JD/Elizabeth situation, and I can only hope, for everyone else’s sake, that she finds something else to complain about for the evening.

While the girls are busy, the dudes hold their own night. This crew is hilar…it ranges from hottie Craig to Whitney in his sport coat. Austen proposes to Craig that he should get “under” someone to get “over” someone. I mean, Austen has got some game. It comes out with the girls that he is no stranger to online dating. “I saw Austen on Bumble!” Naomie shares with the girls that the last time she had sex was six months ago and the girls’ convo continues in this direction: relationships, boys, hook-ups, etc.

As the girls sip wine and talk about Naomie’s “PG Syndrome: psycho ex-girlfriend syndrome,” Thomas shares his “sure fire way to meet women” and that is to “cut in on her while she is dancing.” He is like a 75 year old man and I am applauding Craig for calling Thomas a “creep.” It seems like it is Shep’s goal to find Craig a lady and Shep is parading Craig around like a mom would her son. The parade continues since it appears as though the dudes are on a bar crawl. Thomas states he has his “phone, wallet, and c*ck” (GAG) and Shep is already questioning Austen re: his hang-out with Peyton. These boys are more pathetic than the girls are for sure.

The next morning, Craig goes to see Chelsea in her salon for a fresh cut. The two talk about their night’s out, and Chelsea suggests that Craig and Naomie sit down to have a chat to know where they are as a couple. Magically, Naomie texts Craig at that very moment, and so post haircut, a desperate seeming Craig runs like the wind to chat with Naomie.

Craig straight up tells Naomie that he wants to get back with her. He also tells her, “I’m getting a life-coach (aka an Uber driver)” and that he is making changes in his life. Naomie basically sh*ts all over Craig, just like she ALWAYS does. I am so happy that Craig throws three “big life accomplishments” in Naomie’s face. It baffles me how this guy would even THINK about getting back together with someone who talks so terribly to him. “You look at me like the devil and I haven’t done anything wrong.” Good for you, Craig. The lack of encouragement and the negativity Naomie spews is outrageous. Craig states, “All I wanna do is spend my life with you…” but can’t finish his sentence because Naomie storms off. Poor guy. I guess it IS time to get under someone. Too soon??

TELL US – THOUGHTS ON THE LATEST SOUTHERN CHARM EPISODE? HAS CRAIG ALWAYS BEEN THIS BEAUTIFUL OR IS SINGLE CRAIG JUST HOTTER? SHOULD NAOMIE CUT HIM SOME SLACK OR DOES SHE HAVE A POINT? WHAT IS UP WITH KATHRYN’S PHONE?!