by Julia May 8, 2018 68 comments
ShareTweetWhatsappPinterestRedditTumblrMailFlipboard 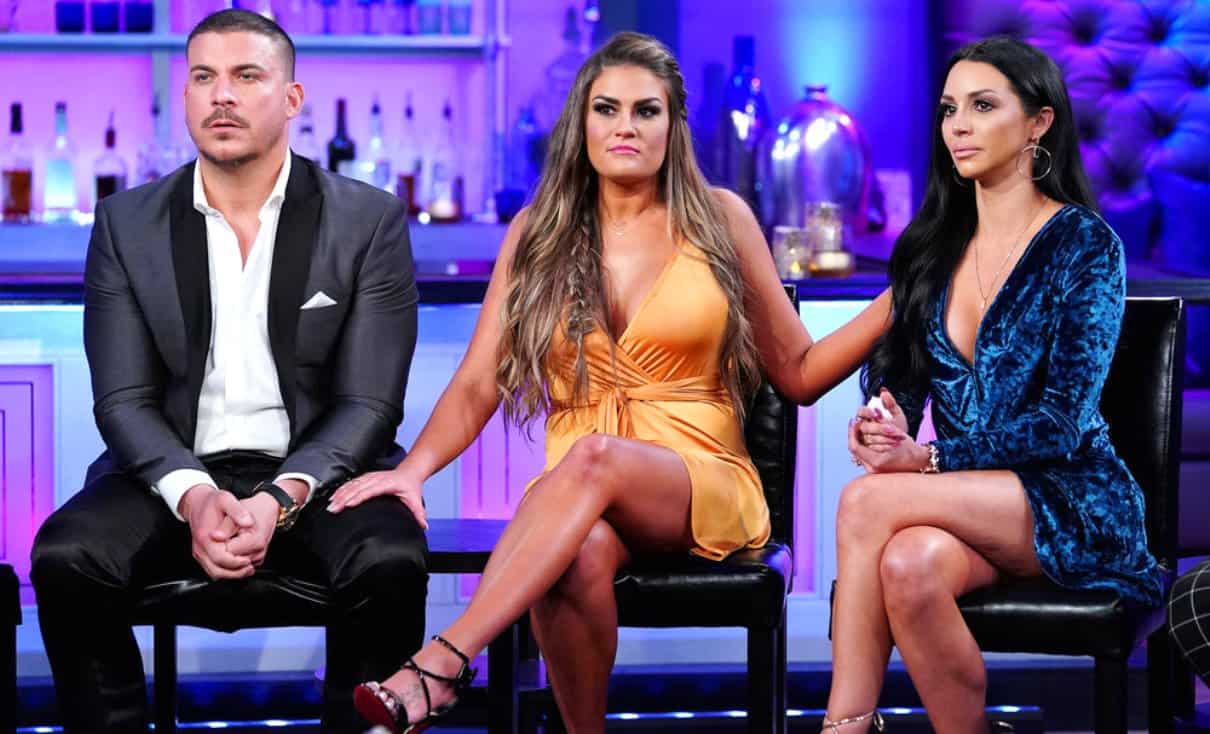 We all know there is certainly enough drama for a three part reunion of Vanderpump Rules…the question is, how long will it be before Scheana mentions Rob???…In the words of LVP, “Let the games start!”

Andy Cohen wastes no time and begins catching up with the crew. “It seems like with this group, things are always changing.” Andy goes around asking each cast member about his or her relationship status and when he gets to James, he lets it rip. “James, are you still with Logan?” YAS.

The first thing Andy wants to talk about is the Jax/Faith cheating scandal. How creepy is Jax when he leans over to Brittany and states in her ear, “first of all, I love you?” I totally forgot just how f*cked up this sexcapade with Faith was. I mean, first of all, Jax cheated. Second of all, he did this whilst Faith was on duty as a home-health-aid in an elderly woman’s house….and oh yea, that elderly woman was sleeping in that house. I cannot even DEAL with this. Andy wants to know, “Were you trying to sabotage your relationship?” Jax responds by saying this is what he does with every relationship. He tries to ruin it. Yea, I don’t get it either.

Anyway, Jax does his best to explain what was going through his pea-brain at the time by saying, “It could have been a hole in the wall”…he just wanted attention from anyone. So gross. Jax also claims he has never really felt “bad” about something before in his life, but this time, things are different. Seems like reiki really worked for Jax! (insert eye roll here.)

Later, LaLa explains why she wanted to come back to LVP’s restaurant. We all know she was just craving that air time, but LaLa says, “I felt for the first time it was a safe place to be in.” Riiiight. Scheana uses this segment as her chance to sh*t on LaLa, as she was the one who told LaLa to come back, and now for some reason, LaLa dislikes Scheana. LaLa is tired of hearing Scheana talk about herself all the time and Scheana is tired of how “rude” LaLa was in her interviews for the show. She talked smack about Scheana time after time and Scheana feels attacked. For the record, you ARE tone deaf, Scheana.

Next up: James Kennedy. James denies ANY type of hook up with his bestie, Logan. He claims he is straight and that he still dating Raquel. I am not buying it, but whatever. Somehow, Kristen gets roped into this conversation since she used to date James and “knows him very well.” Kristen believes where there’s smoke, there’s fire and insinuates that she has questioned James’s sexuality in the past, too. Guess we will never find out.

When it comes to cringe-worthy relationships this season, Stassi’s is high up on the radar. Stassi states that it is “horrifying” to watch her relationship with Patrick unfold on TV for the world to see. Her now ex, Patrick, is rude and arrogant and I’m happy to see him gone. It’s nice to see the gang clamor around her and make her realize that he was a total troll. Even Schwartzie and Sandoval let Stassi know that they did not like the Stassi she was when she was with him. Stassi explains that she “was submissive” with Patrick and is now in a healthier relationship. (I’ve checked him out on Instagram. Upgrade!)

Ah yes. Now it’s time to move on to the Tom/Ariana lack-of-sex segment. How awkward to discuss the intimacy issues while your boss is essentially rubbing elbows with you on set? Ariana beats herself up and shows just how insecure she is, but states that her relationship with Sandoval is MUCH better these days.

Andy states he wants to switch gears from this convo, and boy does he ever. We go from hearing about Sandoval trying to jump Ariana’s bones, to Jax’s father’s death. It’s so sad to hear all of the details and to see Jax breakdown. Every cast member does their best to hold back their tears as Jax chokes up. Brittany was Jax’s guardian angel throughout the entire process and let’s hope he finally sees what a wonderful human she truly is. Crazy how “the most horrible thing” could lead this couple to bliss. Jax further states, “I’ve never been to a funeral in my life,” so I cannot even imagine how difficult this had to be for him. Later, Jax explains that he feels like his dad has “taken over” his body and if Brittany were to get pregnant, he would accept his spawn with open arms. Talk about a 180!

LVP begins to touch on the progress of TomTom and make it very clear that Tom 1 and Tom 2 are “JUNIOR partners, very Junior partners.” Somebody better let Sandoval know cuz this guy essentially thinks he is LVP reincarnated. Schwartzie seems to understand his role a little better:“We’re not having idea sex, but we’re doing some foreplay.”

Sandoval whines and LVP states that she “supports” the boys’ ideas, but at the end of the day, she is the restaurateur and she knows what she’s doing. I mean, she owns multiple restaurants, so she must be doing something right. LVP further explains that she has yet to cash the Toms’ checks and it seems as though there are a whole lotta details that need to be ironed out. “Our name has some value to it, otherwise you wouldn’t name it that.” Touche, Sandoval. Except, maybe you should have been a little more responsible and not have taken FireBall shots before your meetings with LVP in Vegas. Just saying…

Speaking of Vegas…the spotlight goes on Scheana, who is VERY busy in Las Vegas in her “starring role.” Puh-Lease. Seems as though everyone is tired of Scheana, as she is a lousy friend (see: LaLa) and extremely self-centered. (None of this comes as any surprise to me). Everyone rolls their eyes, fake sleeps, snores, etc. as Scheana tells the LONG version of her life with Rob. Scheana explains that Rob pulled away and the break-up happened two weeks after the show wrapped up. Scheana is still unsure if the break-up was a calculated move. “What p*ssed” Kristen off the most, “is that Rob threw a fit that Rob didn’t wanna be a part of the show, and then showed up to every event” and humiliated Scheana. Not cool.

When Andy asks Jax how he feels about Scheana’s claim that he’s threatened by Rob, Jax throws insult after insult at Scheana. Jax’s anger spirals out of control and before we know it, Jax is going off about how Scheana never called when his father died. Instead, she simply sent a text. Scheana, clearly very shaken, storms off set and uses her “stop crying time” to conveniently get her hair and make-up touched up.

As Jax continues ranting and raving and cast members try to calm him down by saying he is “misdirecting his anger at Scheana,” Ariana sneaks off to check on her friend. It’s bedlam on set and Jax is nearing the wild-eyed rage we know all too well. No one can calm Jax down. Sandoval takes a swig of his flask. Andy looks concerned. And in the dressing room, Scheana ponders,“Why is this like harder than my divorce?” And that, my friends, is a wrap on part one. #PoorMikeShay

TELL US – THOUGHTS ON THE VANDERPUMP RULES REUNION PART 1? DO YOU THINK JAX HAS CHANGED? DID JAX GO TOO FAR IN ATTACKING SCHEANA OR DID SHE HAVE IT COMING? DO YOU THINK ROB IS PHONY?