Southern Charm Recap: Exes on the Half Shell 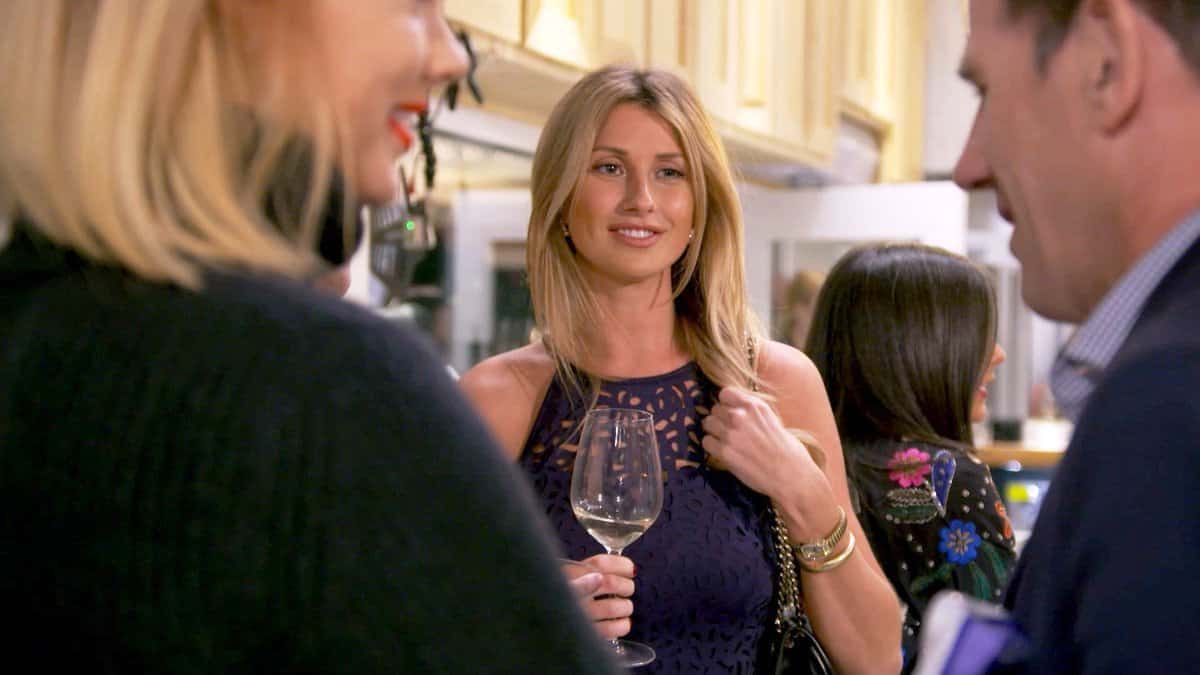 While Cameran discusses her “stubborn cervix” with her “desensitized” doctor husband, Jason, Kathryn calls for potential employment at Gwynn’s, a clothing store. Kathryn realizes that, hot damn, she has been unemployed for quite some time now and therefore decides to hit up a store she likes to shop in for a job. The owner of Gwynn’s gives a rather hesitant response, but agrees to “talk” to Kathryn. Big win!

Crazy pants-I mean Naomie-has entered the building. The building is really a new restaurant, Nico, that her father is opening. “Back when we were in France, my dad had dozens of restaurants,” and so he has decided to dive into the Charleston foodie scene. Naomie and her pops go back and forth in French (oo la la!) and Naomie gives her dad the run-down on her life’s drama. She explains Peyton and tells her dad that “I feel like she is using people to climb the social ladder.” Her dad seems annoyed that his kid is the mean girl and reminds Naomie that life is about being nice.

Meanwhile, Craig meets up with Austen…where else? At the bar…shocking, I know. Oddly enough, the boys are legit across the street from Naomie’s father’s restaurant. The dudes discuss the night’s insanity at the Halloween party where Naomie essentially went bat sh*t crazy on Peyton. Funny that the boys are talking about this juuuuuuuust as Naomie rings Austen. The only reason Naomie is making her “I’m sorry” rounds is because her dad told her, “You go and apologize. There is no problem.” And because he wants some well-known faces at his restaurant opening party. Naomie actually apologizes for her behavior at the Halloween party and invites Austen to the restaurant opening. She then asks Austen for Peyton’s number to apologize and extend the invite to her, too. The guys are amazed!

Later, Austen makes his way to a brewery to make his dream come true. He is trying to make some money moves and knows what he likes and has a guy who can make it all happen. Meet Thomas, the brew master. Austen gets a tour around a brewery, tries to explain his brewsonality (“What I’m gravitating towards seems to be passion fruit and grapefruit”), and learns the ropes. For a mere $400, Austen can get a keg or something of a beer made just for him. Seems like things are looking up.

Shep scoops up “Slim” (aka Cam) for some lunch, but not before Cam makes Shep take her down “labor lane.” Evidently, the cobblestone road induces labor, but it seems it ain’t inducing anything but some urinating. After their adventure, Cam, as always, tries to pry Shep open and figure out what his “plan” is… She may finally realize that “Shep is not the marrying kind”…and honestly, she’s got her own issues now…like having a baby and stuff.

Craig pops in to talk to his homegirl, Patricia. Happy to see Michael, the butler, back in his natural environment and no longer working for Cam. Patricia explains her “high-end company” that uses dog and cat fabric and offers Craig the opportunity of a lifetime: he can make a PILLOW for her collection! Craig states, “Not to be dramatic, but this is the break that” anyone could ever ask for! How is this a real conversation?! And WHO is buying these things from Patricia’s “fashion line?”

Speaking of fashion, Kathryn preps for her job interview. She’s nervous as all get out and I can tell right away that the owner only agreed to meet with Kathryn because he wanted some Bravo air time. Kathryn is bombing this interview like woah and it’s making me second-hand embarrassed that she takes “a moment to think.” The owner politely explains that they don’t have a lot of “turnover???,” so basically, no thanks, Kath.

I’m loving this haircut dishing that happens every time a cast member goes to see Chelsea for a fresh cut. Shep rolls into Chelsea’s salon and they both discuss the upcoming restaurant opening party. It is so obvious that Shep has the hots for Chelsea and it’s also obvious that Shep is trying to make Austen look like the bad guy. Chelsea is very clearly upset about Peyton being with Austen, despite Shep’s attempt to mar Austen’s reputation. Good try though, Shep. Maybe if you were just a wee bit younger…

That evening, more and more guests make their way to the Nico soft opening party. It’s always so awkward when Kathryn gets around Thomas. Particularly when his girlfriend, Ashley, is standing right next to them. Thomas is either 100% wasted or 100% still in love with Kathryn…unfortunately, I am unable to decipher…

Because Chelsea looks like a smoke-show tonight, Austen is trying his damndest to get Chelsea back. When Austen gets the chance to catch up with Chelsea at the party, he finds out that Shep is saying that he is “getting a lot of women” and going out all the time. It’s becoming very clear that Shep is trying to throw Austen under the bus in order to make him look bad to Chelsea. Maybe it’s time Austen speak up for himself instead of just brushing everything under the rug. Now it wouldn’t be a party if Peyton didn’t show up.

The guys of the group have no qualms about saying hello to Peyton; however, the girls are a little bit more intense. When Naomie finally walks over to greet Peyton, she suggests they go talk. Naomie apologizes right away and states that she had a “defense mechanism” kick in and she really has a true heart-to-heart with Peyton. It’s kinda nice to see Naomie be nice and admit that she is “absolutely not over Craig.” I mean, the guys a dreamboat! He makes DOG AND CAT PILLOWS!!

Upon watching Thomas and Ashley canoodling at the party, Kathryn states, “I always thought I’d be jealous when Thomas got a new girlfriend…” but alas, she is not. I was hoping Kathryn would say she realizes how gross Thomas actually is and would rather eat slugs than get back with him, but no dice. Seeming to have had enough, Kathryn steps out to chat it up with Shep who has gotten up from the table because he, too, has had enough with flirtation (ie Austen and Chelsea).

While Kathryn and Shep are outside, Austen confides in Whitney what Chelsea just shared with him about Shep. Whitney hasn’t had enough air time this season and decides to stir the pot. He insists on calling Shep inside so Austen has to confront Shep since he feels like he is being “misrepresented” in front of Chelsea. What a mess. The way these boys fight over Chelsea is hilarious, but it is SO sad to see that no matter what these two knuckle-heads do, neither one of them have won Chelsea over. I mean she legit shuts Austen down hardcore when he suggests they should “get the hell outta here.” Chelsea straight up says no to Austen. It’s a good thing Austen’s back-up is there. Helloooooooo Peyton!