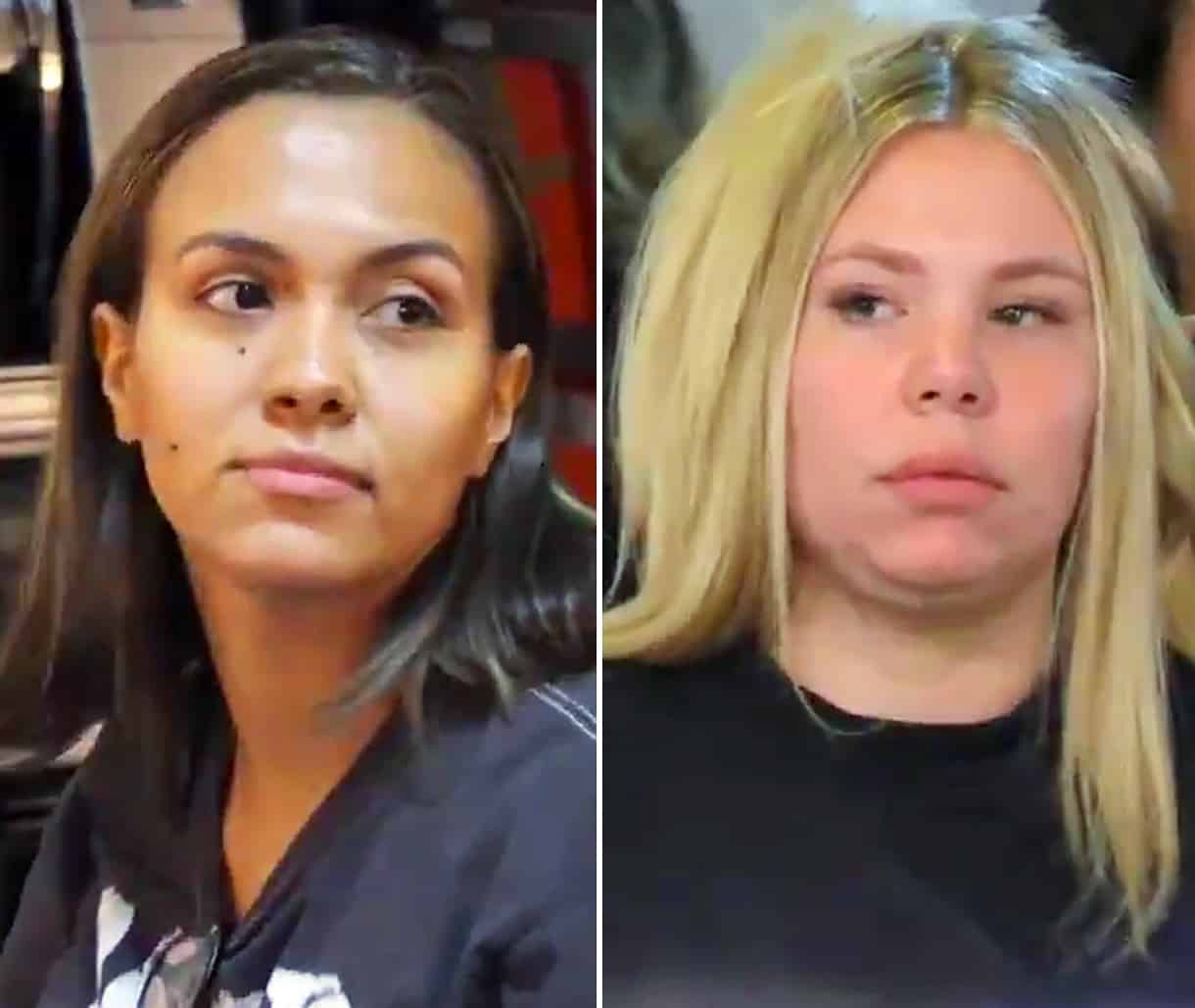 The Teen Mom 2 reunion is coming up and the drama is real.

Kailyn is not looking forward to the reunion for a multitude of reasons. First, her freshly named baby will be coming with to California (sans Isaac and Lincoln). Kail is worried because Lux is “still so little” and now he has to go on a plane, be around hair and makeup people, etc., etc. Second, “There’s all these rumors about Javi and Briana dating.” As much as Kailyn denies she doesn’t care who Javi dates, we all know that this whole thing is rubbing her the wrong way. Despite the fact that Bri texted Kail and denied any type of romantic relationship with Javi, Kail’s not buying it. “Someone that you work with is dating your ex-husband. It’s weird. It’s just kinda messy.” Well, when you put it that way…

It appears as though NONE of these moms actually look forward to this reunion. Briana states, “Oh God, I’m not ready for this.” It’s her first ever reunion and she is nervous. She talks with her sister Brittany (aka the star of the show) about her trepidation and is super worried about seeing Kailyn after starting a “non-relationship” with Kail’s ex, Javi. Brittany states that, “He’s been trying to get with you a*s since you was pregnant, which is gross.”

Trying to coordinate with her ex-husband, Corey, has gotten easier for Leah over the years. I’m not clear which kid Leah is taking to California for the reunion, as they refer to their children by various names and after all of these years, I am not entirely sure who is who. Equally as confusing is Jenelle’s constant anger. “I hate going to reunions cuz it’s just a buncha drama.” Jenelle states she is just not “gonna say nothing,” but we all know that’s never gonna happen. Jenelle is ultra fired up about Kaiser and Nathan’s mom because she filed paperwork against Jenelle. David, Jenelle’s hubby, just lumbers around, agreeing with Jenelle and reminding her of various things she should be angry about. He’s essentially zero help whatsoever. But even David calls BS on Jenelle when she states, “I’m just gonna keep to myself.” Jenelle is just “trying to avoid every situation possible that’s gonna cause drama.” This oughta be good.

Over in Hollywood, the cast gathers at the hotel. Aubree comes along for the first time in awhile and Chelsea’s dreamboat hubby and their new son Watson come with, too. Cole states that “Drama’s for Nerds” and Chelsea giggles and states she is gonna put that on a t-shirt. Well, looks like Cole’s gonna have to make a t-shirt for Leah, ASAP. Leah is fa-reaking out for stirring up drama between Kail and Bri. She is second guessing her decision to tell Kailyn about the whole Javi/Briana scenario, but it’s too late now. The damage is done.
Bri shares that although she is nervous about her first reunion, “Javi is coming by later” and does he ever. He rolls into her hotel room in a sports coat and appears to be nervous around Bri. Javi talks about a long distance relationship with Bri and is legit drooling all over her. They flirt like crazy and Javi begs Bri for a date. Young love.

At the shoot location, Kailyn’s already making dramatic moves. Her friend, Bone (no I did not make that up) and baby Lux do not have a separate room and Kail’s displeased. She blames her need for a separate room on Lux, as he does not have vaccinations (but traveled on an airplane??), but we all know that she is throwing a fit because she doesn’t wanna be in the same room with Bri and Jenelle. “I don’t like Briana. I don’t like Jenelle. I don’t wanna be around them.” Ouch.

Good thing Leah brought her kid with her. She seems realllllly into the whole thing. I am concerned about Leah’s blouse- seems like in all of her worrying, she forgot half of her shirt. See what drama does to ya? Speaking of drama, Jenelle and Briana, the two outcasts, catch up between filming to talk about the cliques that form between the girls. You know. Jenelle explains to Bri that the filming is like “Mean Girls.” Briana confides in Jenelle and says she doesn’t even know why Kail is mad at her. Um, how bout cuz you are crushing on someone’s ex. It’s a little too soon, Bri.

WOAH. Two worlds collide as the Teen Mom OG AND Teen Mom 2 cast gather for filming. I’m loving Maci, Chelsea, and Kail hanging out, but really, my favorite is seeing Barb chillin with Jo. Friendships form in the most unlikely places sometimes…
Later, Brittany, Bri’s sister, claims she is “stressed cuz of ya’ll’s petty a*s problems.” She is talking about Briana and Javi. Bri fills Javi in on what happened earlier today during hair and makeup. As soon as she’s done talking, Javi slides in that she “looks good though.” Javi is creeping HARD and Kail is witnessing it firsthand. Problem is, she doesn’t like it. But because baby Lux has been crying for over an hour and “Bone” cannot seem to get the baby to stop, Kail leaves filming to handle her mom duties. Meanwhile, the cast is enjoying the party set-up for the next special. Seeing all of these teen moms boozing is hilarious. Jenelle does not disappoint, BTW. Regarding the shots: “I’ll drink all of them. I’m the teen mom!” Truer words have never been spoken, Jenelle. For the record, David is a psycho…He leaves the party cuz there was no more beer and then proceeds to pop balloons on his way out. He gives me the creeps.
After the party, Leah talks to the producers about the conversation she had with Bri’s sister, Brittany. Leah explains that she likes Bri cuz she’s real, but her loyalty lies with Kailyn. As if on cue, Bri walks in when she hears Leah utter her name. Leah shares that she doesn’t wanna make anyone upset, but Bri makes her opinion known. “I don’t give a f*ck about how anyone feels” and she storms out, with Javi hot on her heels, obviously.
The next morning, everyone heads back to the studio to film the reunion. Bri really needs to stop pretending that she doesn’t know why Kailyn’s upset with her. Even Bri’s mom knows what’s up: “She’s mad that her ex man likes you- he’s digging you.”

Chelsea is the first to be filmed and wouldn’t ya know? Kail and Bri find themselves back in the hair and makeup room together again. Kailyn talks to the producers about last night’s party and Bri butts in. Briana shuts down the awkwardness and addresses the elephant in the room head on. She goes in on Kail and demands to know what is going on. Kail states, “Ya’ll are basically trying to be together.” Briana claims that Kail is “salty cuz Javi is moving on.” Now Briana’s mom gets involved. Bri DOES NOT like it when Kail gets disrespectful to her mother and the situation escalades. “I can be ratchet and you can be boujee.” And thennnn Bri’s sister jumps in. This is when it starts to get good. Kail repeats, “Bye Brittany. Ok, Brittany,” but we all know Brittany is not gonna stop. In fact, that girl just got started. Looks like we are gonna need some more t-shirts over here: “Drama’s For Nerds!”

TELL US – THOUGHTS ON THE LATEST TEEN MOM EPISODE?