The Real Housewives of New York City Recap: A Tale of Two Islands

by Tiffany Brown May 17, 2018 28 comments
ShareTweetWhatsappPinterestRedditTumblrMailFlipboard 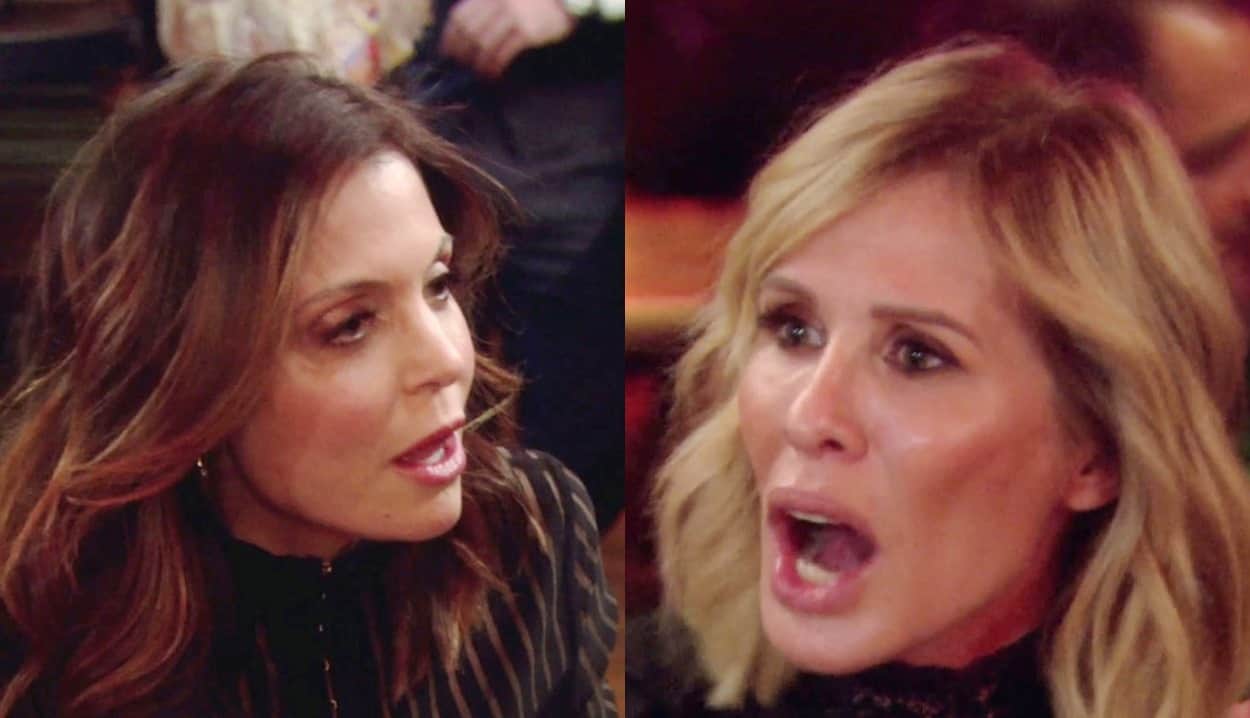 Last night’s episode of The Real Housewives of New York City was study in contrast between life on two very different islands.

First up, Bethenny and Dorinda touched down in Puerto Rico to pass out gift cards and other aid to the residents. It was surreal…total devastation!

Bethenny has devoted a great deal of time and money to the relief effort, but it was Dorinda’s first time on the island since the hurricane, and she was truly awestruck , not only at the damage and loss, but at the dignity and resilience of the people there.

Many of the residents commented that they were the only people who’d actually brought money, and Bethenny said that much of the money being donated through various organizations was not making it to them.

It made both women sad and angry, but they left with a new perspective on what truly matters, and vowed to remember what true struggle looked like, and to stop getting mired down in petty nonsense.

But, for Bethenny, all it took was a dinner with the girls back on the island of Manhattan for all that newfound wisdom and zen introspection to go right out the window.

It began when Bethenny noticed that Sonja was being snubbed by Carole and Tinsley. They were pretty obvious about it, too. They barely spoke to her when she arrived, and sat at the other end of the table snickering and whispering like school girls whenever they overheard her talking to Bethenny about a recent date with “Albany Guy”.

Bethenny felt really bad for Sonja, and could see why she felt so insulted..especially by Tinsley. She recalled that Sonja had basically given Tinsley the life she had now, and agreed that Tinsley’s rude behavior and ungrateful attitude would make her crazy too… Seemingly forgetting that Tinsley had thanked Sonja in the past, and Sonja’s constant gossip and badmouthing of Tinsley is what led to the drift but I digress!

Never one to keep a thought, feeling, observation, or anecdote to herself, Bethenny turned toward Sonja, and said “you know, you were really at the bottom when you met Sonja”. Just like that..no beating around the bush.

Tinsley was shocked because Bethenny’s comment seemed to come out of nowhere. Before she could respond, Carole piped up and said “emotionally.”  And when Bethenny asked what she meant, she said that Tinsley “was at the bottom emotionally”.

Bethenny said she understood that, but noted that aside from her state of mind, Tinsley had also had no job, no place to live, and no friends, and that Sonja had not only opened her home to her rent free, but introduced her to the other women, which led to her introduction to Scott.

Wasn’t this the same argument Jill Zarin had many seasons ago about Bethenny?

Carole kept trying to interrupt, insisting that Tinsley had turned her life around on her own. But Bethenny quickly shut Carole down, and told her that she was talking to Tinsley, and to stop jumping into their conversation.  She added that Carole’s loyalties shifted “depending on who she’s sitting next to”, and that she didn’t seem to have any thoughts of her own.

In the meantime, Tinsley was loudly trying to plead her case, and say that she was angry with Sonja for lying about her, and telling everyone that Scott was still supporting her financially.

Tinsley was getting louder and louder, and when Bethenny told her to quiet down, Carole again stepped in to defend her, rightfully saying that Bethenny was usually the loudest person in the room, so she didn’t need to be telling anyone else to lower their voice.

Bethenny once again told her to “stop chiming in,” and said that she loved her, but she needed to get her own voice, and stop jumping from bandwagon to bandwagon.

Carole said she was “ride or die” for her friends, and Bethenny knew it, and should “get off her jock.” Good grief! Did someone give Carole a 90’s Phrase of the Day calendar?

The other women looked on in surprise and dismay, and wondered just how things had gotten so tense between Bethenny and Carole, but Sonja, pleased and emboldened by Bethenny’s vehement defense, addressed Tinsley directly, and told her she should at least be polite to her when they were with HER friends.

Sonja also found allies in Ramona and Luann, who win the Best Friends Ever Award for donning coveralls and gloves, and helping Sonja paint over the calcified bird droppings on her patio furniture (don’t ask). As they worked, they discussed the events of the night before, and both Luann and Ramona let Sonja know that they were on her side.

Since Dorinda hadn’t been able to make it to dinner, Bethenny filled her in on her argument with Carole, and shed  little light on what had caused the distance between them.

For starters, Bethenny felt that Carole hadn’t taken much interest in her passion for helping out in Puerto Rico. She’d also contacted Carole’s on again/off again boyfriend, Adam, and asked him to accompany her to Puerto Rico to take pictures, but when she’d told him there would be so compensation—it’s for charity, after all—he’d declined to do the work.

This had rubbed Bethenny the wrong way. She said that people with far less money than Adam had lent their expertise to the relief efforts, and had never asked to be paid.  But when she’d told Carole about it, and said that she felt Adam was a bit of an “operator,” Carole defended him, saying that “anyone who was successful in business had to be an operator”.

Aside from that awkwardness, Bethenny said that she felt she and Carole had simply grown apart, and that since Carole didn’t have children or a career, she had more in common with Tinsley.

But Carole is actually making moves to get back into professional writing, and met with a friend to discuss writing an online column for Cosmopolitan. She proposed that her first piece be about what she called her “#MeToo moment,” and  recalled an unfortunate encounter with a lecherous director in her early days in the city, who asked her to “rub his nipples”.  How awful! And she was practically a kid.

Luann is looking to work through some of her pain through art, as well. She met with a cabaret director, who will be helping her to create a showcase. She’ll be singing, of course. (When doesn’t she?) She even belted out a sultry, if not slightly creepy, Marilyn Monroe-style rendition of “Happy Birthday” right in the middle of the restaurant. It was a little pitchy, but she feels that taking on the challenge will give her “closure”, so more power to her.

Now with all this going on, the ladies should have maybe taken a break, but Carole was hosting a party in honor of her friend, Karen Duffy’s new book, so…rinse and repeat.

Ramona, anxious to stir the pot, told Carole that she was  impressed with the way she’d recently “found her voice”, and was proud of the way she’d stood up to Bethenny, which is funny because she’d just told Sonja that she agreed with everything Ramona had said to Tinsley on her behalf. But that’s our Ramona!

She added that she felt Bethenny had been wrong for calling Carole a “puppet” at dinner. Ok, this NEVER happened. No one said the word puppet at any point. Bethenny said that Carole switched sides, and was always chiming in on  someone else’s behalf, but not “puppet.”

But even when Carole tried to correct Ramona, and remind her that she and Bethenny were still good friends, and she would never call her a “puppet”, Ramona insisted she had. Carole wondered out loud if perhaps those were Ramona’s feelings about her, and Ramona just laughed and made one of those odd Ramona faces.

Of course, Carole had to ask Bethenny about this as soon as possible, her friend’s book party be damned, so she made a bee line for her the moment she arrived.

Bethenny only half heartedly denied saying it. She said that she actually didn’t remember exactly what she’d said, but that “puppet” wasn’t a word she’d use. But trust me, her eyes said ‘well, if the strings fit..’

Since Bethenny had been confronted, she needed to confront Ramona. And even while she was staring Bethenny in the face, Ramona insisted that she’d said it, although she did admit that maybe those hadn’t been her exact words.

They weren’t her words at all. But just as Bethenny was about to say so, Luanne, who’d been standing by silently, interrupted to say that it had been Ramona’s “interpretation.” Wow! Bethenny just said “Oh, so you’re interpreting things now?”

It was seconds away from getting ugly, so Dorinda gathered everyone together to invite them to a 1920s themed “Murder Mystery” party at her home in The Berkshires.

As the ladies discussed the theme, possible costumes, and their assigned characters (yes, Dorinda’s going all out!), Tinsley asked to speak to Sonja alone. Oh boy! Everyone froze, waiting for the fallout, but it never came.

Tinsley quietly and calmly apologized for anything she’d said or done to make Sonja feel that she didn’t appreciate all she’d done for her, and said she’d like to move past it, and be friends again.

But we’ll see how long it lasts. The ladies will be back with more drama next week. That Murder Mystery party will provide a back drop for yet another showdown between Bethenny and Carole, and all I can is that I hope there’s not an actual murder. Stay tuned!

TELL US – THOUGHTS ON THE LATEST RHONY EPISODE? IS CAROLE A PUPPET OR WAS BETHENNY OUT OF LINE FOR HER COMMENTS? IS TINSLEY UNGRATEFUL TO SONJA OR HAS SHE THANKED HER ENOUGH?