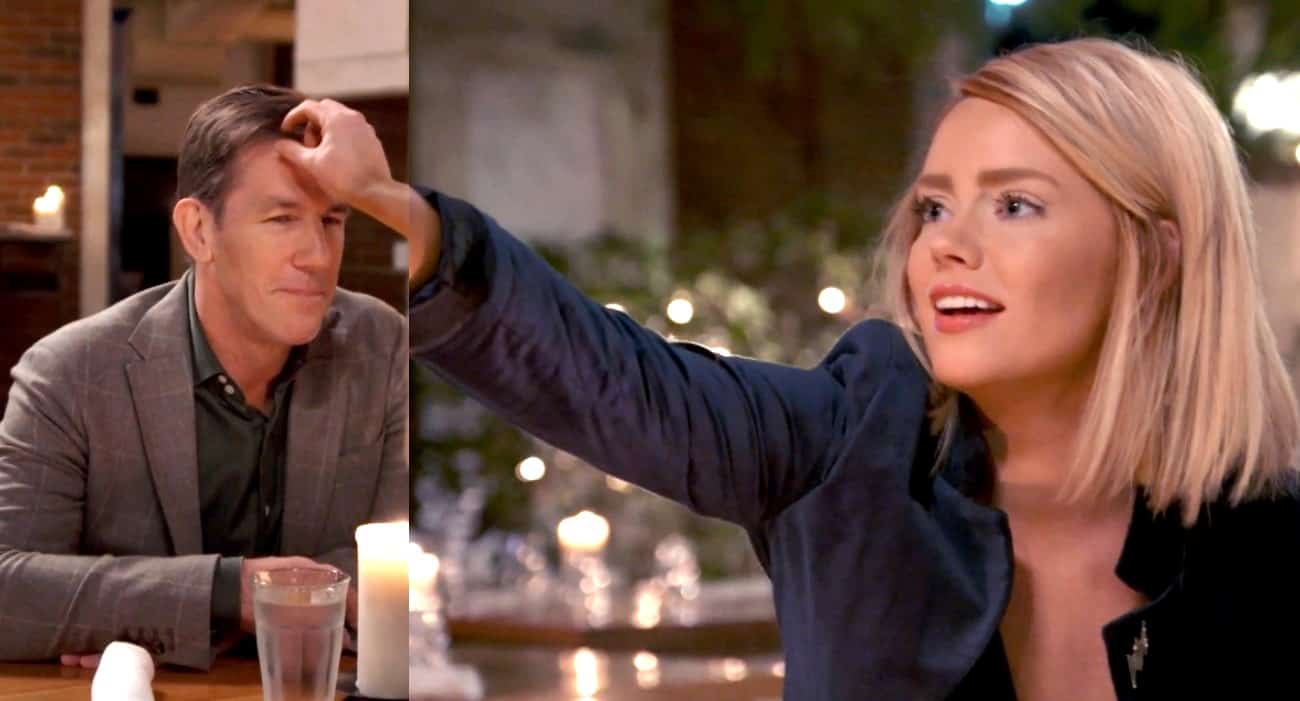 On this episode of Southern Charm, we all watched Kathryn blossom into a woman right before our eyes. The Kat who yelled and threw a tantrum to get what she wanted is no more. This new Kat has learned how to handle the men in her life, most notably the one who matters the most, by using a charm offensive. Bravo, and here’s to hoping Kat 3.0 is here to stay.

What do a super pregnant lady, rich middle-aged men, and cliquey girls all have in common? They’re all part of this episode of Southern Charm.

Cameran, ready to pop any minute now and yet still more put together than I’ll ever be, chats with her mom regarding cramping and pressure. Cam seems to think that today’s the day baby Palmer will make her debut. Instead of freaking out, Cam feels “very tunnel visioned and very focused.”

Just like Chelsea during her workout. Addie, Chelsea’s roomie and trainer, whips Chelsea and Kathryn into shape. Kathryn explains that she wants to #looklikechelsea and since having her kids, her bod is just not the same. The girls work out for approx. 3 minutes and then have a girl talk sesh.

Kathryn shares how Thomas was flirting with her at the Nico party. And that he was doing it right in front of his girlfriend, Ashley. Kathryn states that it’s “like a formula.” “Triangulation” is what Thomas calls it. “Crazy” is what I call it.

Austen and (a very inactive) Craig go for a nice little jog (which also lasted approx. 3 minutes). Austen fills Craig in on the whole Victoria saga—ya know, the girl that was friends with Chelsea? Evidently, Austen broke things off with Victoria in the summer because he still had feelings for Chelsea and things were getting messy. Turns out, Chelsea has zero feelings for Austen (see her shutting Austen down last episode), so therefore Austen bounces back to Victoria because she is ready, willing, and able. Craig reminds Austen, “You need someone who lives the same lifestyle as you.” Good luck finding a chick that likes to make dog patterned pillows, Craig. Sigh. The boys really need to step up their games.

Naomie (and her new nose) states that she has been on a “rage and repeat” pattern with Craig. She knows she is better without him, but man does she miss Craig when it comes to household duties. No one to fold her sheets. No one to iron her dish towels. Maybe she should pick a better roommate?

Over in Sheplandia, he phones his dad, Rip. Shep and Rip. The gang’s all here. Shep explains that his parents have “two stable children and then” him. Unbeknownst to me, Shep is quite the business man. He explains he has “mailbox money,” as he rents out his downtown home and is in the works to renovate his beach property, too. Sure, he may be old…but with age comes wisdom. Or something like that.

Later, Patricia rolls into Gwynn’s, the scene of Kathryn’s uber awkward job interview. The real reason Patricia is there is so she can “personally style” Thomas’s new girlfriend, Ashley. She is trying to turn her into a Southern Belle and make her a little less California. After all, “Thomas is gonna be on Medicaid if he doesn’t settle down and get married.” Ashley is all smiles as she hobnobs with Patricia and begins her fashion show. She oohs and ahs and spins around in the clothing. Everything Ashley says, Patricia pooh-poohs. “Honey, never refer to yourself as a Barbie Doll” and certainly don’t use that “Pretty Woman” reference.

I love how Patricia makes Ashley sit down in THE most uncomfortable sequin dress. The ladies talk about the future: with Thomas, with “playing house,” and with the big move. Patricia explains that she “knows how to close the deal” and that Ashley needs to have her own life in order to have Thomas want Ashley on a “more permanent basis.” $10,000 later (Thanks, Thomas!), Ashley is well on her way to becoming a Southern Belle…who says money can’t buy love?!

Shep, Thomas, and Whitney all meet up and get the low down on Thomas’s love life. He explains, “For everything you get, you have to give up something.” It’s clear that Thomas doesn’t love being in a relationship. It’s also very clear that there is something going on between Thomas and Kathryn since the exes are getting along better than ever before. (Side note: WOAH. Who knew that Whitney was tatted?! ) Thomas admits to hooking up with Kathryn every now and then, but states, “you know, we don’t plan it!” Thomas can’t help but flirt with Kathryn.

Hold the phone. After that horrendous interview, Kathryn is given the opportunity to “intern” at Gwynn’s. It must be nice to have the Bravo hook-up. Kathryn’s first test is a customer profile styling case. “On a scale of one to ten how nervous I am? A solid ten.” Kathryn continues her downward spiral and receives “a little bit of feedback…” aka a nice way of saying, “you are terrible.”

That night, Austen heads out on a date with his ex-girlfriend, Victoria. The couple seems very comfortable together and Austen admits that he wants to be with Victoria. Austen seals the deal with a kiss and it’s official, the bachelor is taken, ladies.

Evidently, Patricia cannot do anything by herself. She has a butler, a server, and a chef. (No wonder this lady “could have been married 20 times”). And it comes out that she enjoys having all-male dinners. Exactly. Patricia’s got game, ya’ll. Watching these young bucks roll in next to these middle-aged tools is quite funny. Someone please get a load of JD’s bowtie. Yikes. Turns out the men complain and gossip almost as much as the ladies do. Thomas shares his frustrations about Ashley and even goes as far as saying, “I’m gonna send ya back to California. Look, I’m 55. Don’t hover over me like momma.” Come on. You cannot restrain Thomas. “He’s got all the money and the power.” Gag. The “girl talk” moves onto Austen’s love life. He shares he is back with Victoria and you can kinda see Shep’s antennae go up. Yes, Shep. That means Chelsea is available.

Over dinner, Patricia states, “I keep hoping all of you would get over your Peter Pan syndrome.” She reminds the men that they need to settle down and lock down these women because, “In the south, if you were still single when you were 30 years old, you were a spinster.” This is by far the weirdest, vegan dinner party ever invented and the fortune cookies were totally the icing on the cake. Evidently, Thomas has Kathryn on his mind, as he makes a Freudian slip. Whilst explaining engagement rules and regulations, Thomas says, “I was telling Kathryn….” Errrr…he meant Ashley. Either this guy has had too many strong cocktails (Thanks, Michael, the butler!) or is not fully over Kathryn, his baby momma.

The next day, Kathryn rings Thomas and asks him if he wants to meet up for dinner. Uh, what?! Equally as confusing is Cameran’s “steel trap cervix.” The baby wasn’t ready to come yet, so therefore she “did the walk of shame out of the hospital without a baby.”

Walk of shaming seems to be something these people are rather comfortable doing. I mean, watching Thomas walk on in to meet up with Kathryn is totally awkward. The exes toast and make uncomfortable small-talk about Thomas’s social media post. Turns out Thomas posted a “family photo” of Thomas, Ashley, and the kids on Instagram. Thomas offers a sincere apology to Kathryn and you can tell there are more things that need to be said between these two. Finally Kathryn comes out with it. She wishes that they can be friends and get along. The new Kat knows when to bat her eyelashes, when to smile and when to move that strand of hair out of Thomas’s face. He even agrees to un-invite Ashley to the upcoming birthday party of their son Saint.

Kat definitely proved she is no longer the naive young woman of yesteryears. I think these two tweets sum it up best –

if kathryn had said yes, t rav would have put ashley on a greyhound back to california though #southerncharm

Kathryn just mindfucked Thomas and it was incredible #southerncharm

TELL US – THOUGHTS ON THE LATEST EPISODE OF SOUTHERN CHARM?