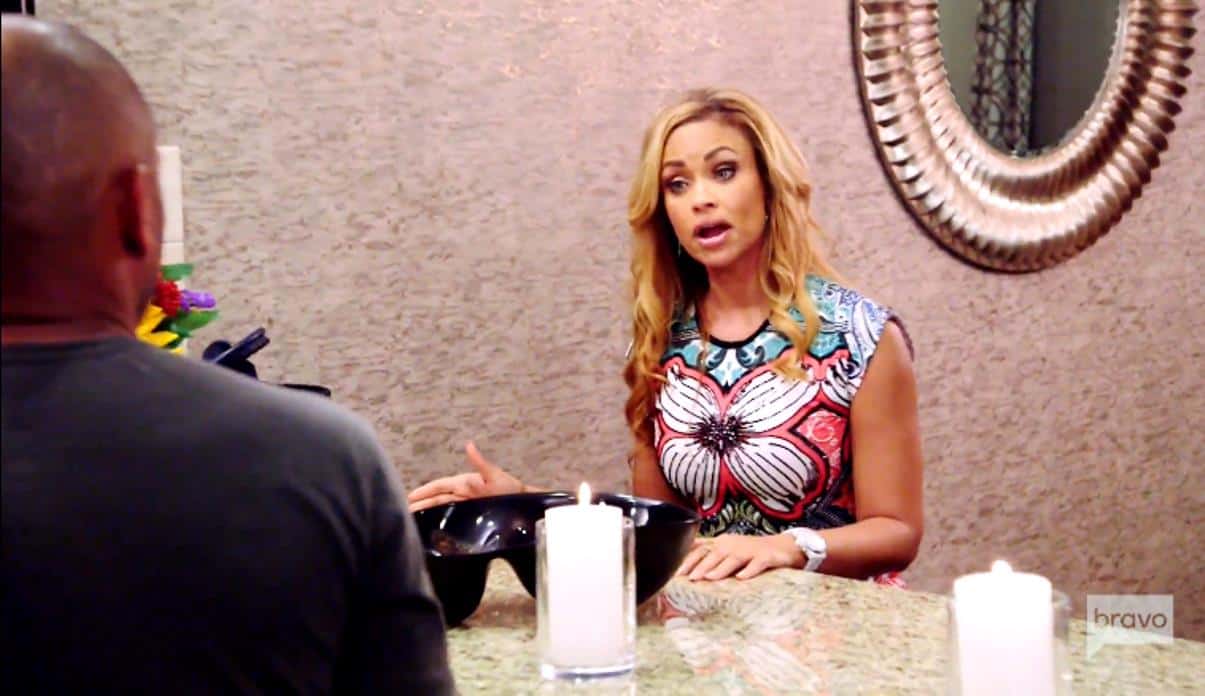 Last night’s episode of The Real Housewives of Potomac wasn’t the most exciting. It was what I call a setup episode, meaning that it set the stage for some serious drama to come, but we did get a few intriguing tidbits to wet our appetites for the big things ahead!

For starters, Gizelle announced that it’s “a wrap” for and her boyfriend, Sherman. She showed up alone to what was supposed to be a double date with Robyn and Juan, and explained that Sherman had told her that he was no longer sure he wanted to be in the relationship.

Gizelle was hurt and disappointed, but this has been a long time coming. She’s been complaining about the lack of communication between them for most of the season, and apparently, he was quite upset over having his picture “splashed all over” People Magazine, after they used photos of the couple to accompany an article about Gizelle. Um…he knows we’ve seen him on the show, right?

He also sent a pretty strong signal about his lack of commitment when he failed to show up at her birthday party, which was just flat out rude. Gizelle was forced to sit there while Ashley repeatedly asked where he was, and said “what a shame” it was that he couldn’t be there. Yeah, right! She loved every minute of Gizelle’s misery, and she didn’t even bother to try to hide it!

Gizelle was secretly hoping Sherman would surprise her, and show up to celebrate, and by the time they cut the cake, so was I—anything to wipe that smug grin off of Ashley’s face.

She’s been feeling herself lately. Ever since she got back together with her husband, Michael, she’s been absolutely obsessed with everyone else’s relationships, and enjoys bragging about how happy and “lovey dovey” they are now.

And Ashley and Michael really are in a good place. In fact, as a show of “good faith”, Ashley offered to sign an extension of the prenuptial agreement. The document originally put a limit on the amount of money Ashley would get if they divorced within three years, but after that, she would be awarded half of everything. Last night, they signed a new agreement that said they would have to be married for five years before assets were split equally.

Michael seemed to appreciate the gesture, and when they joined Monique and her husband, Chris, for bowling, he even said he might be ready to talk about having children sooner rather than later.

Monique also had a juicy bit of gossip to share with Ashley. She’d recently met Sherman’s ex wife, Kyndall, who told her all the dirty details of their divorce. It seems Sherman was seeing other women, and didn’t even have the decency (or good sense) to um…entertain them in a hotel.

Apparently he liked to have his fun in the park, and his ex wife found out about his philandering when he got arrested for public indecency along with a female companion. This was several years ago, but Monique and Ashley had a hearty laugh at Gizelle’s expense, all the same. And spoiler alert: we’re going to become pretty well acquainted with Kyndall in the weeks to come!

Monique also wanted to know if Ashley would be attending an upcoming gala, where she would be presenting an award. As it turns out, the gala is the same night as Robyn’s “She Is Empowered” workshop event, and the two were scrambling to see which of their friends would be choose their event over the other’s. Ashley explained that she would be going to Robyn’s event because she’d accepted her invitation first, and also because Robyn had created the workshop, whereas Monique was just a speaker and presenter at hers.

Monique was pretty surprised and a little hurt. Considering  her recent blow up with Robyn, she’d expected her friend to choose her. But she also knew that it would have been rude for Ashley to skip Robyn’s event, so she ultimately said that she understood.

Robyn was not  as understanding when she found out that Charrisse would be attending Monique’s event in favor of hers. She felt betrayed because she’s known Charrisse longer than anyone, and couldn’t believe she’d choose Monique over her.

She was also disappointed to hear that Karen wouldn’t be coming, after initially saying she would. Karen claimed she’d been confused because Siri had put the wrong dates in her phone, but Robyn wasn’t buying it.

Karen told Robyn that she and Monique really needed to talk, but that seems unlikely. When the two came face to face at Gizelle’s birthday party, they didn’t even acknowledge one another until Charrisse asked if they were going to speak. And even then, they only mumbled a half hearted “hi”, and continued ignoring each other.

Candiace will also be attending Robyn’s event, and the two seem to be getting closer, despite Gizelle’s feelings about the newbie. Gizelle is still holding a grudge toward Candiace over their squabble in Nemacolon, and  hadn’t even invited her to birthday party.

But Robyn finds Candiace’s antics “funny”, and enjoys hanging out with her. Candiace seems to like Robyn, as well, and felt that attending her workshop might actually help her business.

Candiace runs an online wig business with her sister, and would like to open a brick and mortar store, but first, she’ll need to convince her mother, who provided the start up money for the business, that she’s willing to put in the time and effort necessary to run a store full time.

We’ll see how the Robyn and Monique’s events turn out next week. But it seems the real drama will come when Karen invites Sherman’s ex  her upcoming party, and she and Gizelle come face to face! Stay tuned, viewers…it’s about to get interesting!