The Real Housewives of Potomac Recap: Exes and Oh, No She Didn’t! 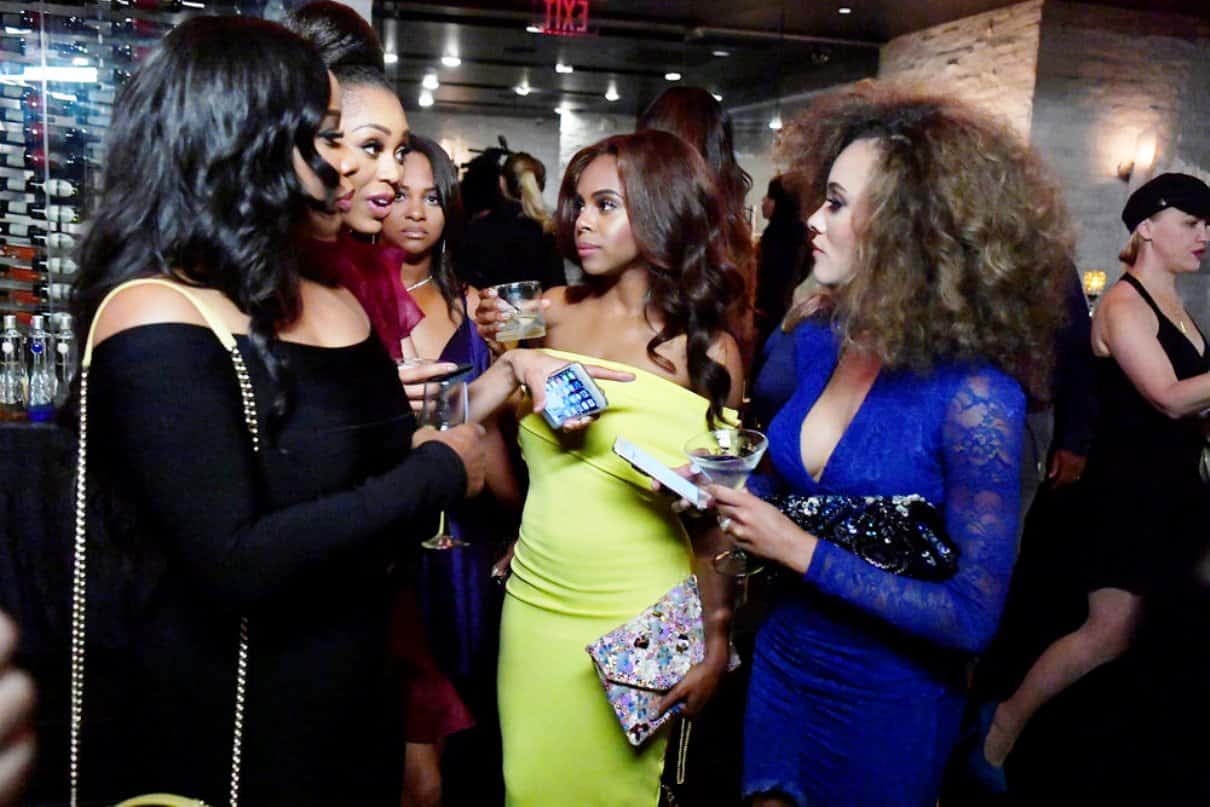 The ladies of The Real Housewives of Potomac have been in rare form this season, but last night they actually managed to outdo themselves when it came to shade, backstabbing, and just being messy for the sake of messiness!

I really don’t understand why any of these women even speak to each other any more because even if one of them can point to one of their cast mates, and say that they haven’t been betrayed in some way by her, they still know she’s capable of it because they’ve watched her do it to some other woman she claimed was her “friend.”

It’s just always something with these ladies, and on last night’s episode, it was all about Robyn and Monique inviting the ladies to separate events on the same night.

Now this shouldn’t have been that big of a deal. After their huge blow up a few episodes back, Robyn and Monique certainly weren’t inviting each other. In fact, neither was even aware of the conflict until Robyn mentioned her event during Gizelle’s birthday party. So, it really should have just been a matter of whose invitations were accepted first. But that would be way too easy…and way too mature.

It didn’t take long for a popularity contest to start, and for the two women to begin lobbying their closest friends to see who would choose to attend their event. Of course, Gizelle was a no-brainer. She and Robyn are inseparable, if not interchangeable. But Robyn was very disappointed to find out that both Charrisse and Karen would be attending Monique’s event.

Robyn felt that she and Charrisse were pretty close, and pointed out that they’ve actually known each other longer than anyone else in the group. Besides, her event was one she had actually created herself, while Monique was just presenting an award at a gala for a charity she worked with.

But Charrisse explained that she’d committed to Monique first, and wouldn’t back out on her at the last minute, no matter how short lived their friendship was. It really was the right thing to do, but that fact didn’t make Robyn feel any better.

Karen actually accepted both invitations, and blamed “Siri” for the mixup in her social calendar, but Robyn wasn’t buying that excuse for a second, and demanded to know why Karen wouldn’t be there after all the times she’d shown up to Karen’s many events and parties. And she had a point, but The Grande Dame doesn’t take kindly to demands, so she decided to go to Monique’s gala.

Ashley and Candiace decided that they would be attending Robyn’s event to show support for her women’s empowerment workshop, and also because they are female business owners, and felt that they might actually get something useful out of it.

So, if you’re keeping score that’s 3 of the women attending Robyn’s workshop, and 2 stepping out to Monique’s black tie gala. Monique had insisted that this was “fine,” but apparently it was anything but, because what she did next set into motion a cataclysmic event that could change all of their “friend”ships forever.

Since she “had an extra ticket,” (girl, please!) she decided to invite another friend. Okay, makes sense. But of all the women in the world, why on earth would she possibly choose Gizelle’s now ex boyfriend, Sherman’s ex wife, Kyndall?! It positively reeks of pettiness and unnecessary drama.

Charrisse has been friends with Kyndall for many years, and was the one to introduce her to Monique, but she had no idea the women were in regular contact with each other, and was absolutely shocked that Monique would have invited her.

Monique acted as though she had no idea why this was a problem, but Charrisse wasn’t born yesterday. She knew Monique was just being messy, and the whole thing clearly made her very uncomfortable. But it got worse.

When Karen arrived, we learned that she also knows Kyndall, and after the two exchanged air kisses, Karen suddenly announced that she would be “remiss” (girl, please!) if she didn’t invite Kyndall to HER upcoming charity event!

Now, Karen’s was a far bolder and more sinister move than Monique’s because she invited Kyndall knowing that Gizelle would actually be there, as well, and the smile on her face while she did it would send chills down your spine in July!

And she was just so insistent that Kyndall be there. So much so that she offered to “comp” her ticket to ensure her attendance, which is odd considering it’s supposedly a charity event. But even that’s highly suspect, because she claims the proceeds are going to Alzheimer’s research, but she’s having people make their checks out to her for-profit wig company.

Considering her husband’s massive tax debt, this bit of creative accounting is troublesome. But, as always the Grande Dame refused be questioned, and said the ladies needed to “write out their checks and mind their business.” It seems like knowing where their money is going would fall firmly into the category of “their business”, but I digress.

The real question in this whole debacle is, WHY are Karen and Monique fraternizing with this woman behind Gizelle’s back, and setting her up for some big, awkward confrontation? Other than throwing some shade Karen’s way over her husband’s tax issues, she hasn’t done anything to warrant this level of vitriol.

And Monique definitely has no reason to create drama for Gizelle, unless she’s attempting to get back at Robyn through her bestie? Seems like a bit much, but with these women, who knows?

But I have another theory…maybe, just maybe, Monique and Karen are setting their  friend up with a role on the show. It certainly seems to be on Kyndall’s mind, because when Charrisse, and even Monique, expressed surprise that Karen had invited her, Kyndall said that Gizelle was going have to “get used to” her “being around”!

But before you start feeling too badly for Gizelle, get this: she’s known Kyndall  for several years too. In fact, they used to be friends! Well, before Gizelle started dating Sherman, that is. According to Kyndall, Giselle didn’t even “have the decency” to tell her she was dating her ex, and instead, Kyndall had to hear the news from her son, who came home from a visit with his father and announced nonchalantly, ‘hey, mom, I saw your friend at Dad’s.’ Just…wow!

Karen’s saving grace was that she did inform Gizelle that Kyndall would be at her party, but for Gizelle, that was just further proof that she knew she was wrong, and by the day of the Karen’s party, both she and Robyn were murderously angry with her.

They planned to show up to the gala to confront Karen about her behavior, a plan that Robyn insisted “was not an ambush”, but a “lesson.” The ladies arrived to the black tie gala in blue jeans, and intended to confront Karen directly, but we’ll have to wait until next week to see how their “lesson” goes.

And, if you can believe it, there’s even more drama on the horizon. Both Candiace and Ashley are having relationship issues.

Candiace’s issues mainly stem from her being a spoiled brat. She and her fiancée, Chris went to tour a wedding venue, and she got angry at Chris for discussing how much things cost. She found it “annoying” that he would bring up their budget, while she was discussing ceilings covered in flowers, and adding to the guest list, but he was simply trying to be realistic, which set Candiace off to the point that she had to walk away “before there was no wedding to plan.”

Ashley’s issue with her husband, Michael may be a little more serious. She’s ready to start a family, and was very pleased when Michael said he was becoming “more and more ready,” himself, while they were double dating with Monique and Chris.

But when Ashley brought up the subject last night, he did a complete 180 on her, and said he wanted to shelve the conversation for a while. He added that before they had children two things needed to occur: first, their restaurant needed to start, at least, breaking even, and secondly, he needed Ashley to “step up,” and fully push away from her mother, because he didn’t want Ashley looking after “HIS” children the way her mother had looked after her! There’s just so much wrong with that sentence, I don’t even know where to start.

I mean, HIS kids?! He speaks as though Ashley will be the au pair, or something! And then to bring up her mother’s shortcomings as a parent, as though Ashley will automatically be the same?! He knew all about her troubled childhood when they got together, and he also knew that having children was a nonnegotiable for Ashley, and now she felt that he was not only “pulling the rug out” from underneath her, but also “disrespecting” her entire family.

So, there you have it….the ladies are dealing with a LOT! And they’ll return with more drama next week. I don’t know about you, but I’m DYING to see what happens when Gizelle and Kyndall come face to face! Stay tuned!