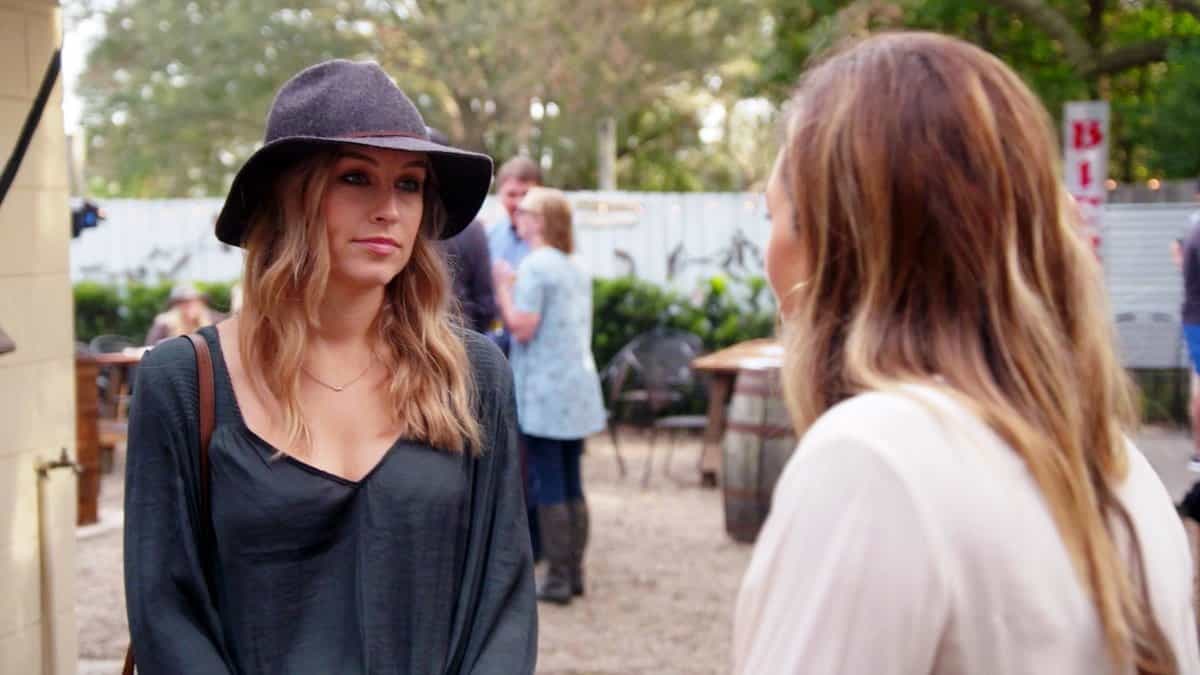 Let’s all hope and pray that luck is on our side and Ashley does not return from her trip to California for this episode of Southern Charm… Fingers crossed, ya’ll!

Why can’t I ever take Craig seriously? This guy severed two tendons in his pinkie (a butter knife incident- like, come on) and is now donning some wack cast-like thing and is forced to get used to that “one handed life.” Austen and Craig are on their way to Greenville to pick up Austen’s first batch of beer. Seems like someone is making moves! Austen talks about his party that he plans on hosting to celebrate the beer, and of course, the Victoria/Chelsea love triangle becomes an issue…yet again. Both ladies will be invited to this party, so it should be interesting to see who Austen focuses on.

I momentarily forgot about Naomie’s injury and it seems like Craig and Naomie, the injury prone duo, are just meant to be together. Sigh. Chelsea meets up with Naomie on the beach and the girls discuss the Kathryn vs. Ashley issue. They also talk about Austen. Chelsea explains that she is still not comfortable around Austen because he is dating her friend Victoria. It appears as though Chelsea is not quite over Austen…no matter what she says.

Over at the brewery, Craig and Austen throw back some grapefruity-citrusy beer. Austen is pleased with his creation and even Craig states, “I can drink it.” Craig’s input is absolutely ridiculous, as he is a self-proclaimed “college beer” dude. Luckily, the beers will be ready just in time for Austen’s party. Let’s just hope the girls in his life will be ready to get along by that point, too.

New mommy Cameran somehow manages to look beautiful, even though she is beyond exhausted. Luckily, Cam’s mom, Bonnie, pops in. She comes to deliver some hand-made blankets and towels …and to catch up with her daughter, of course. Cam explains that motherhood is very difficult and even asks, “What have we done?” to her normal, kid-free life.

Meanwhile, Kathryn and Craig, the BFF’s, have some coffee together. Craig is excited to show Kathryn his new “accessory,” because “it matches” his shoes. OMG. I can’t. The buddies catch up and Kathryn shares how she’s been working a lot andddd that Thomas has been texting her. And texting her with poetry. And texting her about his girlfriend, Ashley. Holy awkward. Craig and Kathryn agree that the relationship is near the end and that Ashley is gonna realize sooner, rather than later, that Thomas is a frugal guy with a wandering eye.

Interestingly enough, off of that note, Thomas finds himself at a jeweler. Whitney meets up with him and the guys discuss “family crest rings.” How do people like this exist?! Whitney’s ring was engraved by the Queen of England’s engraver. WHAT. Thomas decides to get “matching rings” for Ashley and him, despite the fact that he sent her packing last week. Thomas explains that he looks at Ashley “like family” and that his family approves of her. They even called her “down to Earth.” Uh, are we talking about the same Ashley?! I am pretty sure that if Thomas gives Ashley a “signet” ring, she is gonna be PISSED it ain’t no engagement ring.

Over at Fashion Fabrics, Craig begins his quest to design the pillow for Patricia. Kathy, the fabric store owner, tries to guide Craig through the design process. Craig’s feeling pretty good about himself. Let’s just see if he’s able to sew to his highest potential with that injury of his…

Still recovering from his knee surgery, Shep hits up the bowling alley, drops his drawers, and slides on a knee brace juuuust to be sure he doesn’t injure himself further. Kathryn comes to bowl, dressed incredibly inappropriate, donning a blue pleather jacket and some serious statement earrings. Evidently, Shep approves. “You look great. I like what you got going on.” Oh goodness, Shep. The guy’s not very subtle. He’s even giving Kathryn bowling advice. If that isn’t love, then I don’t know what that is. And finally it comes out that Kathryn and Shep have hooked up MORE THAN ONCE in the past. I think it’s time for a revival of this duo. I mean, Kathryn explains that she had a dream about Shep and in this dream, Shep said he loved her. All of the signs are pointing to a love connection.

“Operation Austen’s Hoppy Place” is causing angst for a lot of the cast. Austen’s friend Alexandra comes to celebrate his new beer. The besties discuss outfits, party prep, and of course, Chelsea.

Austen explains the “issue” about Chelsea and Victoria hanging out at the event and the poor guy is getting himself all worked up. Meanwhile, Thomas waits, rather impatiently, for his girlfriend to get ready for the party. Unfortunately, Ashley has decided to come back to Charleston. Rats. It appears as though Ashley’s Californication has made her saltier than ever. Which means she is full of negativity and ready to fight. Speaking of being ready to fight, even Chelsea is nervous to attend this party. She is not prepared to see Austen with his new girlfriend, Victoria, but dresses to kill and heads to the party anyway.

Austen’s family is the first to arrive, followed by Naomie…and her Doritos. What is up with that?! The world’s most awkward intro occurs when Chelsea enters. Austen picks her up and Chelsea makes her rounds with his fam. It’s as if these two are a couple…wait, what? When Kathryn gets to the event, Thomas stares at the tall beauty and obviously that aggravates Ashley. What doesn’t aggravate Ashley?! When asked if she has talked to Kathryn since Hilton Head, Ashley states, “Who is Kathryn?” BURN. Clearly Ashley is having a rough go and homegirl starts spilling to Craig about her relationship woes with Thomas. Keep that girl away from the booze, please.

Side note: I totally have Whitney’s jacket. What is up with his get-up?! Maybe he should take some fashion advice from Thomas or something.

Austen makes a lame toast and then his family toasts to his success. It’s very nice to see them come together and celebrate their kin. In the meantime, Austen is watching wide-eyed as the two women in his life begin a conversation. Chelsea explains, “I’m the type that doesn’t like bad energy,” but let’s just wedge yourself into a conversation, Chelsea, and then address the elephant in the room with Victoria. Victoria shares her displeasure with the infamous Instagram post, but Chelsea makes it clear that she is not after Austen at all. (I’m calling bullsh*t…)

Alexandra, Austen’s best friend, and Austen watch as Victoria and Chelsea hash out the situation. Alexandra asks Austen, “who is your favorite?” and he states simply that “it is different” with each girl. It’s a pretty serious thing to say, especially when one of those girls is actually you’re girlfriend, Austen. The episode ends with Alexandra saying that she doesn’t think Victoria is “the one” for Austen and his face drops. Now what’s a guy to do? #lovetriangle.