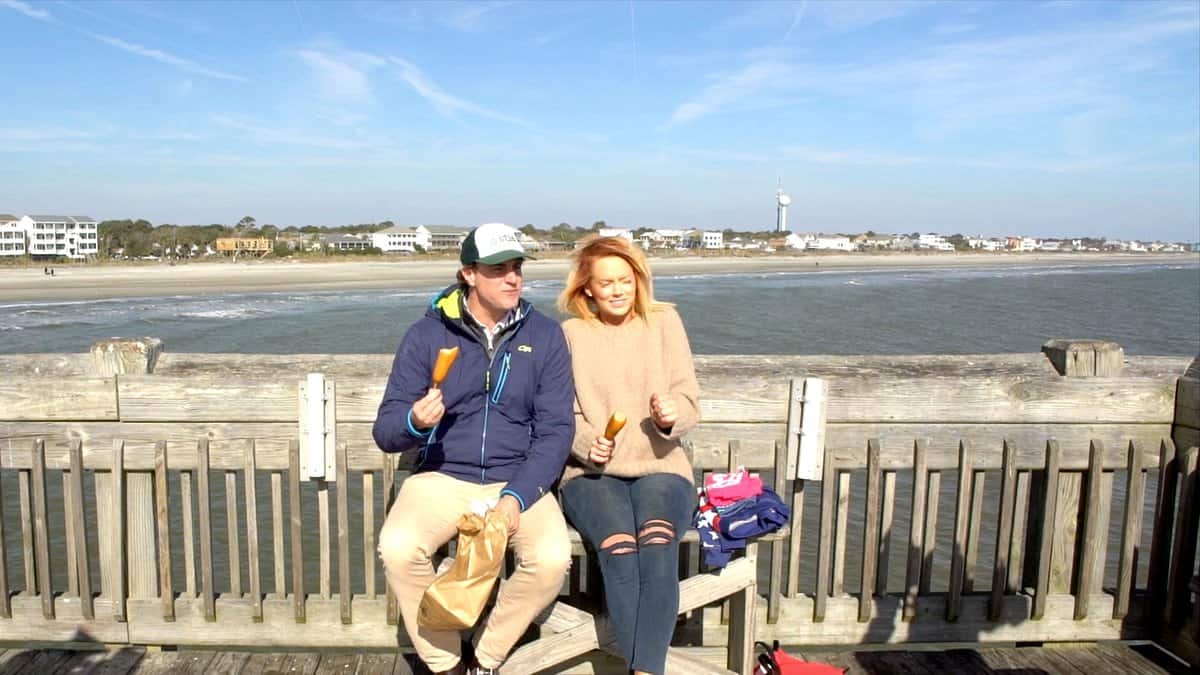 A polo match + a group of exes + lots of cocktails = a recipe for tons of entertainment in this episode of Southern Charm.

Craig-ward ScissorHands is not letting his “disability” dampen his “creative mind.” Craig continues to craft, despite his bruised ego. According to Craig, “deadlines are arbitrary” and he believes that Patricia could have given him a second chance with the pillow job. Apparently Patricia had enough of Craig’s talk and needed him to walk the walk and start producing the pillows he agreed to produce. Naturally, Craig dropped the ball and blames others for his failure. #classic.

Cameran heads over Shep’s place and helps him whip up a meal before he burns his house down. Shep is wasted (aka “overwhelmed”) and rocking an apron that has abs sprayed on it. It looks like something one could pick up at a rest stop on the side of the road. Hilarious. Cam, the new mom, is excited to be out of the house because as she explains, “Babies are little parasites and you’re their personal assistants.” Eventually, a meal is served and Cam and Shep settle in for some eats. The question about a relationship for Shep surfaces, as it always does. And Shep half-jokingly suggests he should just “marry Kathryn.” Woah now.

Upon hearing that Thomas would paying a visit to Patricia, Michael, the butler, asks, “Shall I poach some shrimp and butter?” Man, to have service like that. I think when I grow up, I would like to have a “Michael.” Once settled into Patricia’s living room, Thomas asks for a glass of “the Hamptons Gatorade”…aka rose. Hilar. Patricia discusses her “winter wonderland ball” that involves men wearing tails and women wearing gowns. Snazzy. Thomas explains that he may not be cutting a rug up on that dance floor due to a recent polo injury. He lets Patricia know that he will be having one final polo match on his plantation, as he is hanging up his hat and focusing on his children. I know nothing about the sport except for the embroidered little guy on men’s shirts, but apparently it’s dangerous. It seems like polo isn’t the only thing causing angst in Thomas’s life. Patricia shares the details of her meeting with Ashley and Thomas adds that Ashley told him, “You’re a good provider.” Patricia makes it clear that statement “translates into ‘you’ve got money.’” Says the woman blinding us all with her whopper of an engagement ring…

The happy couple…er, I mean Shep and Kathryn…meet up on a pier and talk over a couple of corn dogs. They look like they’ve been dating for years and seem awfully comfortable with each other. Kathryn opened up to Shep about her depression and what happened when she fell off the grid last week. Shep makes it clear that everyone loves her and Kathryn gets super emotional. Once Shep changed the subject to Thomas’s upcoming polo match, Kathryn explains that going to watch him would be a “trigger” for her. Kathryn lived on Thomas’s Brookland Plantation once she gave birth to their daughter. The memories she has of the place aren’t exactly the best, but Shep makes it clear that he would be there for Kathryn should she start to feel weird.

Later, Chelsea and Austen belly up to their favorite destination: the bar. The duo talk about Austen’s beer party, which leads to the fight Austen had with his then-girlfriend, Victoria. Austen lets Chelsea know that he is broken up with Victoria and then very “smoothly” asks Chelsea what’s up with her dating life. Chelsea makes it known that she is not looking for anything with anybody and the disappointment on Austen’s face is real. After a couple thousand oyster shots, Chelsea asks Austen if he would go with her to Patricia’s upcoming ball. It’s adorable how they both blush and pretend like it’s not a date. We’re onto you, guys.

En route to Thomas’s polo match, a silent Ashley (THANK GOD) and a brooding Thomas take the long ride to the plantation. Thomas explains, “I feel like my whole life, women have been attracted to me for the wrong reasons.” Yea, I’ll say, Thomas. If you don’t wanna come across as wealthy, you may wanna pump the brakes on the shopping sprees and plantations built solely for your polo matches. Just saying. Despite the tension between the couple, all Ashley can think about is a wedding. These two can’t have a regular conversation, yet she wants to lock down the relationship and Thomas’s bank account. Thomas outright says he feels like her “sugar daddy” and tells Ashley to get a job so it could change “the energy” of the relationship. Ashley explains that she is a nurse, and she would have to work weekends. If she worked weekends, then Thomas would go out at night and then she couldn’t trust him. This lady is wild. Thomas has reached his limit and suggests that they just “call it quits.”

The last hoorah for Thomas’s polo retirement is almost in full swing, yet the thought of being back at Brookland Plantation is causing a lot of memories to come flooding back for Kathryn, and rightly so. However, that doesn’t stop her and the rest of the gang from trekking out for the final polo match. Everyone’s there: Shep, Austen, undershirt-less Craig, boot-less Naomie, Chelsea, and Naomie’s roomie. Now the party can start. Ashley emerges on her stick legs from Thomas’s Mercedes svu just in time for the match. While Thomas is playing, Ashley chews Shep’s ear off about her issues with Thomas. Ashley even goes as far as asking Shep if he would date her so she could have a reason to stay in South Carolina. Gag.

As Thomas “polos” around, the rest of the crew drinks and eats and barely knows that there is a match going on. On the other hand, upon Kathryn’s arrival, she greets Thomas during halftime and experiences incredible déjà vu. This was the place where she brought Kensie home and the place where her relationship with Thomas disintegrated. Kinda like the way his relationship with Ashley is fizzling out…

Everyone’s having a great time. Chelsea exclaims that “we’re getting the band back” and suggests that Naomie and Craig go to Patricia’s ball together. Craig tries to play it off like it wouldn’t be a good idea, but the reality is that the guy invited some chick from the bar to be his date. Woopsie! The crew doesn’t even realize the match is over and Kathryn continues talking about her memories of the plantation.  Eventually, Thomas emerges post-polo match and finds himself catching up with Craig and JD. (I will never get over JD’s outfit.) The guys discuss Ashley and how she hit on Craig by saying, “Well Craig, if only you were a few years older, I would be dating you instead.” SO bad.

Meanwhile, as Ashley talks to ANYONE about her current situation with Thomas, Kathryn and Thomas sit down for a little chat. Thomas shares that his relationship with Ashley is a bit stressed and that he “hasn’t had a lot of success in his personal life.” Kathryn begins to give her ex some advice and warns him to protect himself and make things simple. “There doesn’t have to be drama. Now dating her do you feel like I am any less psycho?”

Thomas finds Ashley inside the house sitting alone. She asks him how his convo went with Kathryn and Thomas states that it was “nice and peaceful.” Ouch. Ashley explains she wants their relationship to get better and she doesn’t know what else to do. Thomas makes it clear that he has to be true to himself (which means he needs to be able to go out with his boys, hit on women, and crush cocktails). Ashley essentially begs Thomas for one more chance so she doesn’t “live with regret”…and be broke. “I still have some hope.” I’m sure glad someone believes in this relationship….

TELL US – THOUGHTS ON THE LATEST EPISODE OF SOUTHERN CHARM?