Home Real Housewives of Potomac News RHOP’s Gizelle Bryant Talks Lunch with Karen and Her Late Night Phone Calls! Plus How She Really Feels About The Trip To France!

RHOP’s Gizelle Bryant Talks Lunch with Karen and Her Late Night Phone Calls! Plus How She Really Feels About The Trip To France! 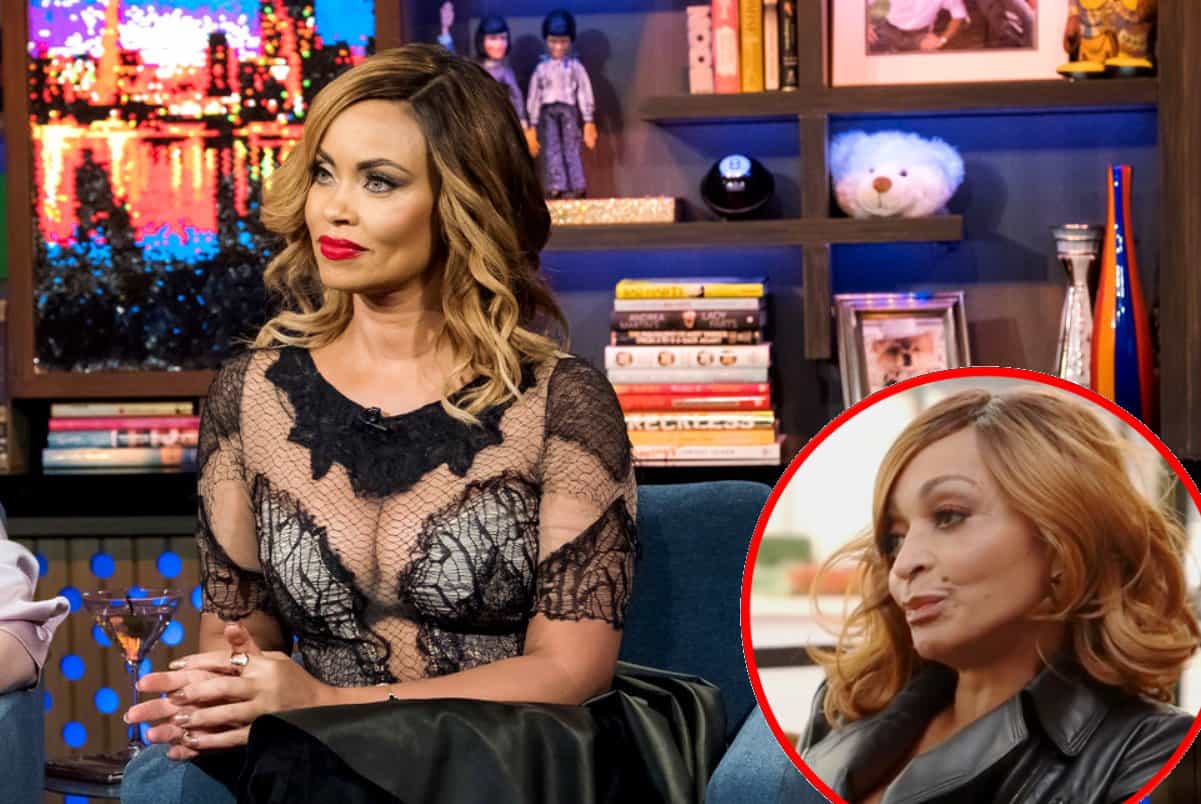 The Real Housewives of Potomac star, Gizelle Bryant never shies away from controversy, which  is probably why she finds herself in the middle of it so often! This season she’s faced of with both The Grande Dame and Monique Samuels.

During a recent interview with Bravo, Gizelle opened up about how she REALLY feels about the trip and why she still has hope for her friendship with Karen.

Gizelle and co star, Karen Huger, have been friends for years, but they have a funny way of showing it! These two women live to get under each other’s skin. It would be hard to forget that bedazzled “Free the Hugers” tee shirt Gizelle wore to Karen’s “press conference with no press”, and Karen certainly hasn’t, but Gizelle says it’s way past time to move on!

”Karen is STILL mad about the tee shirt!” Gizelle said. “That is something that we had put to bed months ago. If she wants to hold on to the tee shirt issue until her dying breath, she can go right ahead. However, she will be doing that all by herself. I have apologized and moved on,” she continued.

And Karen does seem to be carrying a grudge! So much so that she renewed her friendship with Gizelle’s ex boyfriend’s ex wife, Kyndall Douglas, and invited her to her recent charity gala. And if that weren’t bad enough, she invited the woman to join her and newbie, Candiace Dillard,  for pedicures, and proceeded to trash Gizelle to behind her back.

Now, it’s not that Gizelle minds being the word on the street one bit, but she said Karen was only telling one side of the story, and even that was up for debate!

”Karen is the master of telling her version of a story. However, what she has not mastered is making any sense, or telling the TRUTH,” Gizelle explained. “She attempted to talk about me, as if she cares, but we all know that’s not true, either. Next time she should concentrate on the fish nibbling at her bunions!” Gizelle added.

See?! These two just always find a way to throw shade at each other. But, Gizelle says that’s simply their way of relating to each other, and that they always figure out a way to put their differences aside eventually, and get back to being friends.

”Typically when Karen and I sit down one on one, we are able to get to a happy place. There’s going to be shots fired,  and a comedy show, but in the end we make it to a level of respect and friendship. So I’m always hopeful,” she explained.

Well, that’s a relief! These two are truly the Lucy and Ethel of Potomac, and without their banter, the show just wouldn’t be the same. But Gizelle says that what she’d really miss is something we viewers have never had the pleasure of seeing…Karen’s boozy late night phone calls!

“Karen’s calls in the middle of the night are nothing short of Tales from The Twilight Zone. You don’t understand anything that’s happening, but you dare not miss it,” she joked.

Unfortunately, Gizelle doesn’t quite have the soft spot in her heart for her co-star, Monique that she does for Karen, and even an invitation to France to celebrate Monique’s birthday wasn’t enough for Gizelle to let bygones be bygones with her. And it’s a shame too, because so much thought went into those invitations. Monique sent a mime to hand deliver them, but when he appeared during her lunch with Karen, Gizelle was unimpressed to say the least!

”Let’s talk about the most jackleg, second string, bootleg version of a mime that I’ve ever seen,” she recalled. “I thought he was homeless and was looking for money or food. Once he was behind me, I was two seconds from punching him. It was by no means a good way to invite me to the corner bakery, let alone Cannes, France,” she snarked.

Well, I’ll say this for Gizelle, she says exactly what’s on her mind!  But despite her feelings about the invitation (and the birthday girl), Gizelle agreed to take the trip. But she was quite clear on one thing: she’s only going to hang out with the other ladies, and Monique’s attempt at friendship may just be a waste of time..not to mention air fare.

“Monique inviting me to Cannes so that we could “see another side of her” makes absolutely no sense, if you can’t be nice in Potomac, I’m clearly not interested in flying to another country to see if you can be a decent human being,” Gizelle said. “I felt like France was the perfect opportunity for me to kick it with Robyn (Dixon) and see how many flower dresses Ashley (Darby) packed in her suitcase,” she added.

The RHOP airs Sunday nights at 8/7c only on Bravo!