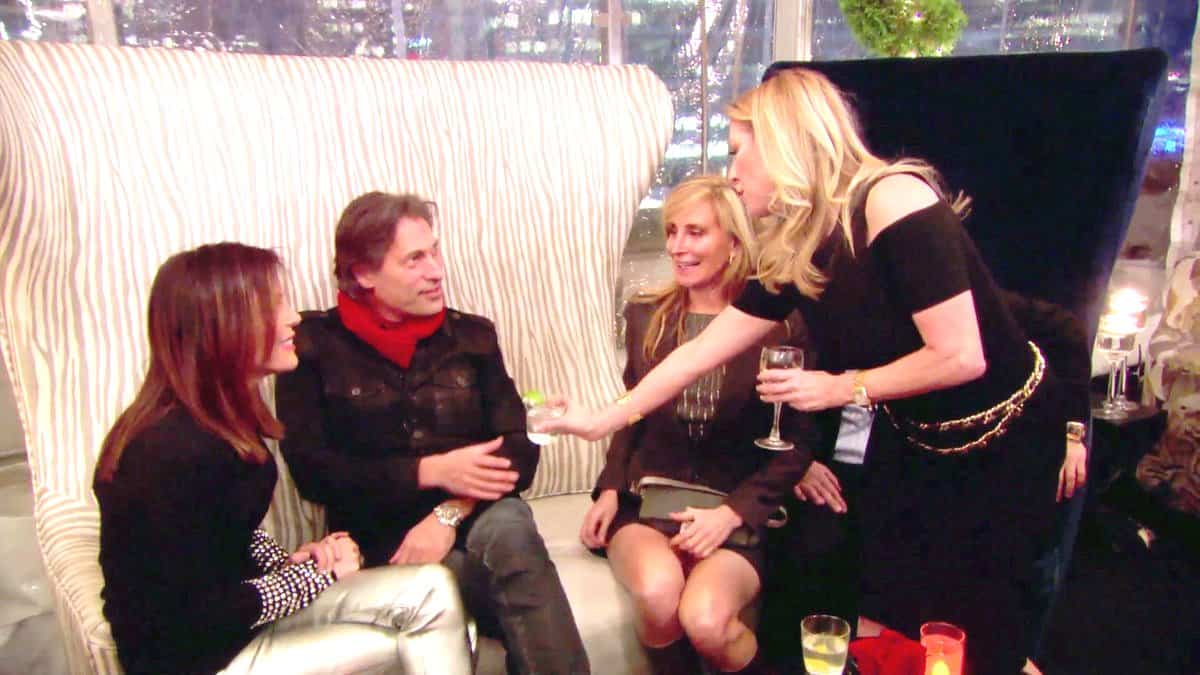 The landmark 10th season of The Real Housewives of New York City returned with a new episode last night, and something truly amazing happened. For the first time ever, all of the women got along! It freaked. me. out.

The craziest part is that they were actually together a fair amount of the time, but there was no yelling, or backstabbing, or catty remarks. Not one! And perhaps it’s because they all seem really happy in their own lives.

First of all, let’s give a shout out to The Countess for marking 30 days of sobriety! And she did it with no fanfare or special announcements. She simply lit a candle during a visit to church with Dorinda, and prayed for continued strength. It was low key, but very sincere.

Luann explained that sobriety is something she works hard at every day, and admitted it was often more difficult to resist the temptation of alcohol while she was in the city, and attending parties and going to restaurants.

But the other ladies have been very supportive, and planned outings that didn’t involve drinking. She grabbed coffee with Carole and shopped for dresses for her upcoming cabaret act with Dorinda.

Luann has an amazing show planned, and she invited some pretty impressive guest stars to perform with her, including actress, Rachel Dratch. But, somehow, I suspect it will be Sonja that truly steals the show. I mean, there’s just no telling what she’ll do. Luckily, Luann had the foresight to declare the stage a “snatch-free” zone,” and ordered her to wear underwear during her performance.

Luann also gave an update on her court case, which she said had been postponed because her lawyer was trying to argue that she hadn’t had “criminal intent” on the night of her arrest. And maybe he’s right. Let she who hasn’t gotten drunk, slipped out of her handcuffs, kicked a cop, threatened to kill him, and attempted to flee the scene cast the first stone. Or something like that.

Now one thing Luann is not ready to do yet is date, and that’s probably for the best…she’s got a lot going on. But the other ladies seemed to have love on the brain last night..or at least a decent hook up.

Tinsley is still gaga over Scott, and seems to be the only one of the ladies that’s ready to settle down. She and Scott have decided to live together in New York, and began the process of movin’ on up to the de-luxe penthouse suite of the hotel.

It’s a fabulous place, as it should be for  $30,000 a month! And that’s before Tinsley orders room service three times a day. But she’s happy to be taking the next step in her relationship, and hopes that staying in NYC will keep them “on more equal footing.”

Carole is still pretty into Adam, even though she pretends not to be, and the feeling is obviously mutual. These two just can’t seem to leave each other alone. He sent her five dozen tulips, and even dropped in unannounced to “visit the dog,” but they’re not back together yet. So when Carole got an invitation to an upscale speed dating event, she gladly accepted and brought the other ladies along.

When they arrived, everyone immediately noticed a very attractive gentleman wearing a jaunty red scarf . His name was Brian, and he was made to star in a Viagra commercial. You know the type: 50-ish, gray at the temples, and has spent a lifetime perfecting the art of perfect stubble. Yeah…THAT guy.

Ramona was immediately smitten, and really seemed to make a connection with him during their 3 minute “date.”  She said she “liked his mind,” and that he made her laugh. She pulled out all the stops for him, too. She tossed her hair, licked her lips, stuck out her cleavage…the whole nine yards. It was quite the spectacle.

And all of her gesticulating seemed to pay off. You could tell he liked her too, and they had to be told more than once that it was time for them to move on to their next “dates.”

Ramona wasn’t nearly as taken with the next guy, although she was flattered enough to kiss him full on the mouth when he said he thought she was in her 40s. And he wasn’t pulling her leg, either. Say what you want about Ramona, but the woman has the skin of a preschooler.

Brian, however, liked his next date just fine. And why wouldn’t he? She was attractive, charming, wildly successful…she was Bethenny! And they weren’t meeting for the first time. In fact, the two had a lunch date several months before, but nothing came of it.

Bethenny clearly enjoyed the flirting, if only because she knew it bugged Ramona, but she really wasn’t interested in starting anything up with him. She said she’s done being with men based on how much they like her, and wants to meet someone that she’s really into. And besides, she loves Dennis, although knows that he’s “not capable” of being a partner.

Carole also noticed Brian, but decided not to make a move since Ramona and Bethenny appeared to be enjoying him so much. But Ramona made one final move on him while he was still talking to Bethenny. She brought him a drink, leaned in reeeeaaaaly close to hand it to him, and spoke in a sultry Marilyn Monroe-esque whisper. It was shameless!

Now, if you don’t intend to watch the episode, do yourself a favor, and fast forward to about 50 minutes in, and watch Bethenny do a hilariously dead on impression of Ramona handing Brian his drink. You’ll thank me later.

The one member of the group who seemed to find a perfect match was Sonja. She was having a blast, and being her usual irreverent self, when she told her conservative looking, suit wearing “date” that she liked to be spanked—hard!

Now, at first glance, this guy may have been a bit of milque toast. But as the saying goes, still waters run very, very deep, and he informed her that he had a cat of nine tails for just that purpose! I guess every pot has its lid.

As the evening wore down, and the men filed out, Tinsley, who’d been observing her friends from a nearby table with Dorinda, proposed a girl’s trip  to South America, and after hearing about the fabulous island they’d be visiting,  they all happily agreed.

That’s right…the ladies are embarking on yet another trip, and as always, there will be plenty of drama. You didn’t think all that commeraderie and good will was going to last did you? The voyage begins next Wednesday at 9/8c. Stay tuned!

TELL US – THOUGHTS ON THE LATEST RHONY EPISODE? DO THE LADIES ACT DESPERATE WHEN IT COMES TO FLIRTING OR ARE THEY JUST GOING FOR WHAT THEY WANT?