Below Deck Mediterranean Recap: Panic at the Deck-O 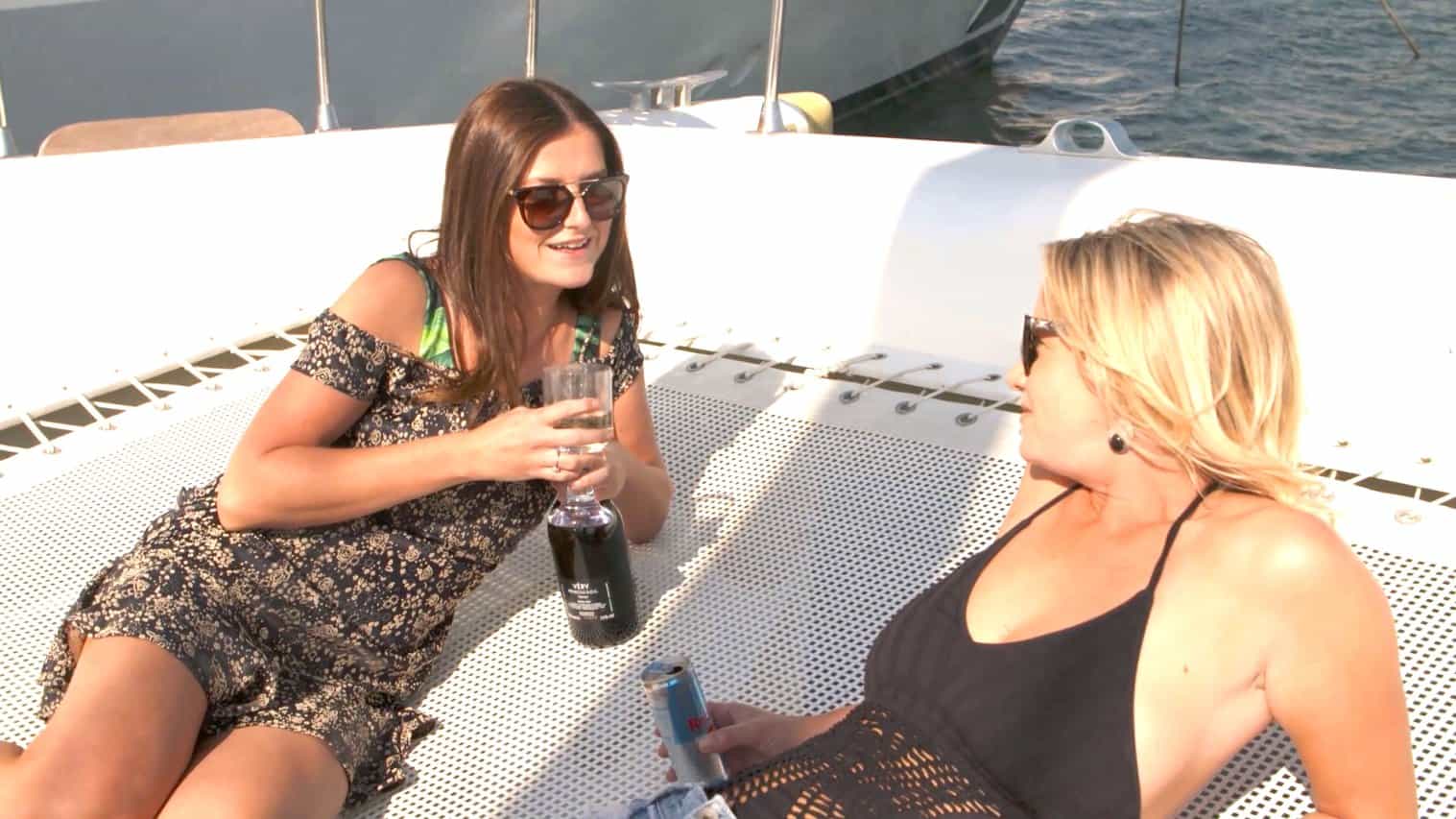 Last episode left off with a smooch between Brooke and Joao and a drunken birthday party for everyone’s least favorite crew member, Hannah. Looking forward to seeing the repercussions of these events play out on this episode of Below Deck Mediterranean.

Happy birthday, Hannah! Seems like the whole crew is highly intoxicated…intoxicated enough for Brooke and Joao to share a smooch, despite the fact that Joao was “pining” for Kasey all night… Man, do things get awkward considering everyone has to share the same boat…and job…

Once back on the boat, Brooke and Joao take the smooching another step and meet up on the top deck for some more love. “Look who brought a duvet!” Ugh. Any man that knows what a duvet is is not worth the tears, Kasey. Brooke claims, “I do tend to be drawn towards men who are seen as womanizers.” Brooke really truly loves the idea of hooking up with Joao and at 2:30 am, the duo head back to their respective bunks.

The next morning makes for some serious day after yucks. Colin, the other guy pining for Brooke, has a hard time dealing with the fact that good guys finish last, again. “Back in college, I brought a girl to a party and my friend went home with her.” Uh, Colin. Glad to see you didn’t LEARN YOUR LESSON…

Meanwhile, Captain Sandy fills the crew in on the newest charter to board next. Turns out, Kenny is back, ya’ll! Kenny is a guest from charter’s past and it’s round II to please this guy. (In case you forgot, this guy was arrogant, hated onions, and his life mission was to be as difficult to please as possible). According to Hannah, Kenny and his guests are “demanding, but the type of guests you wanna make happy.” Everyone has hopes that they have learned from the last experience with Kenny, but don’t they do not fret much more about it because the crew has 24 hours off. It’s party time! #crewdayoff.

It’s basically like a crew gone wild and now everyone is trying to fill in the blanks from the night before. Jamie, despite being sick as a dog, probes Joao about the Brooke kiss and Joao states that he knows what he wants now…and it doesn’t seem like he wants some bleach blond chickie named Kasey.

The next morning, the crew is still enjoying a “24 hour mid-season break” and I have to admit I am a bit jealous of their current situation. Naturally, Hannah ruins the cool vibe by confiding in Adam (aka slurring to Adam) how much she likes Conrad. Adam states he enjoys watches “this boatmance” and Hannah “breaking” Conrad’s “d*ck off.” Oh boy… The love triangle continues to spiral as Kasey lounges on the boat solo, that is until Joao and his white sunglasses pop over to her end of the boat. Kasey slams him about choosing Brooke over her and states that “It feels good to show off my goods in my two piece, while grandma Brooke is in a one piece. This is what you missed out on.” Burn.

Once off of the boat, the crew peruses the grounds, but Chef Adam is having a hard time not focusing on the upcoming charter. “I’m trying to enjoy by day off today, but I have Kenny coming on. KENNY!” He really wants a chance to redeem himself and something tells me, this time, he will.
Over dinner, once everyone is completely lit after a long day of drinking, Kasey and Hannah LOUDLY discuss the crew’s newest relationship.

Brooke 100% overhears the girls and lets them know that she hears them talking sh*t about her and Joao. Brooke states, “It really hurts my feelings because it makes me question if we have a nice friendship.” The tension builds as everyone wines and dines and we all know that too much booze can make for a messy evening…

Hannah cannot keep her nose in her own business, naturally, and she is “obsessing over Joao and Brooke.” Kudos to Conrad for trying to shut her down, but now that means crazy Hannah feels as though she is not supported by her boo. And an angry Hannah is not one I wanna mess with. In the meantime, as everyone drunkenly causes drama, poor Jamie struggles with her health. “I don’t think anyone realizes how f*cking sick I am.” Hopefully homegirl seeks medical help asap.

Later, a drunk Brooke and Joao make plans to hang out post season. Joao opens up to Brooke about Zimbabwe and she listens to him tell tales about his past, including that time he was held ransom. Uh, what? Joao excuses himself for a quick pee, but it turns out that Joao is really just sobbing in the bathroom. Brooke finally realizes the guy’s been gone for too long and runs to his rescue. It seems like Joao has a “regretful feeling in his head” for not being there for his family and he basically breaks down like a girl at a bachelorette party after too many Malibu Baybreezes. Poor Joao.

Seems like everyone’s wheels are falling off now. Hannah cries to Conrad about her fears with the future of their relationship and something tells me it is going to be a helluva a hungover morning for this crew. Someone order up some bagels!

The next day, the crew pretends like they did not drink their body weight and then some the night before, but poor Jamie has to come clean. She fears she has the flu. Captain Sandy sends her to the doctor and while she fights off these germs, Kasey and Brooke fight each other…I mean, discuss the sh*t talking which occurred the night before.

Turns out that Jamie isn’t the only one who is not feeling well…Hannah is having a full blown anxiety attack and Sandy calls her out for not working on the deck all morning. Sandy fears it may be food poisoning, but the reality is that Hannah is “struggling a lot and she is falling in love” with Conrad. She wants to run away from Conrad, but cannot, without quitting. God bless Sandy for allowing Hannah to rest, but poor Conrad is torn: the guy has to work, but wants to take care of his girl, too. Sigh.

As the crew gets into their whites, Hannah joins the gang, but only long enough to greet Kenny, the repeat guest. Jamie returns with her diagnosis and it isn’t good. All I know is she has some sort of “itis” and therefore has to be quarantined. This is like the skeleton crew greeting Kenny and everyone is feeling the pressure.

Once Kenny greets Captain Sandy, he makes his presence known and everyone knows that this time, they have to please the charter… Hannah excuses herself post initial introduction because, “at the end of the day, no job is worth your health.” Hannah is down, Jamie is sick, and Kenny is on board. This is a recipe for disaster. Brooke tries to take on Hannah’s role and Kasey can “step up and do her work without being constantly criticized for it” as Hannah works through her attack. It’s like the D team taking on the world’s worst client. I mean, Kenny, ever the jokester, gifts Adam with a hat that says #noonions. Seems like this is gonna be a hell of a charter. Once Kenny asks for a beach picnic, behind the scenes is an absolute disaster. I never thought I’d say this but, Hannah—we need you!!!