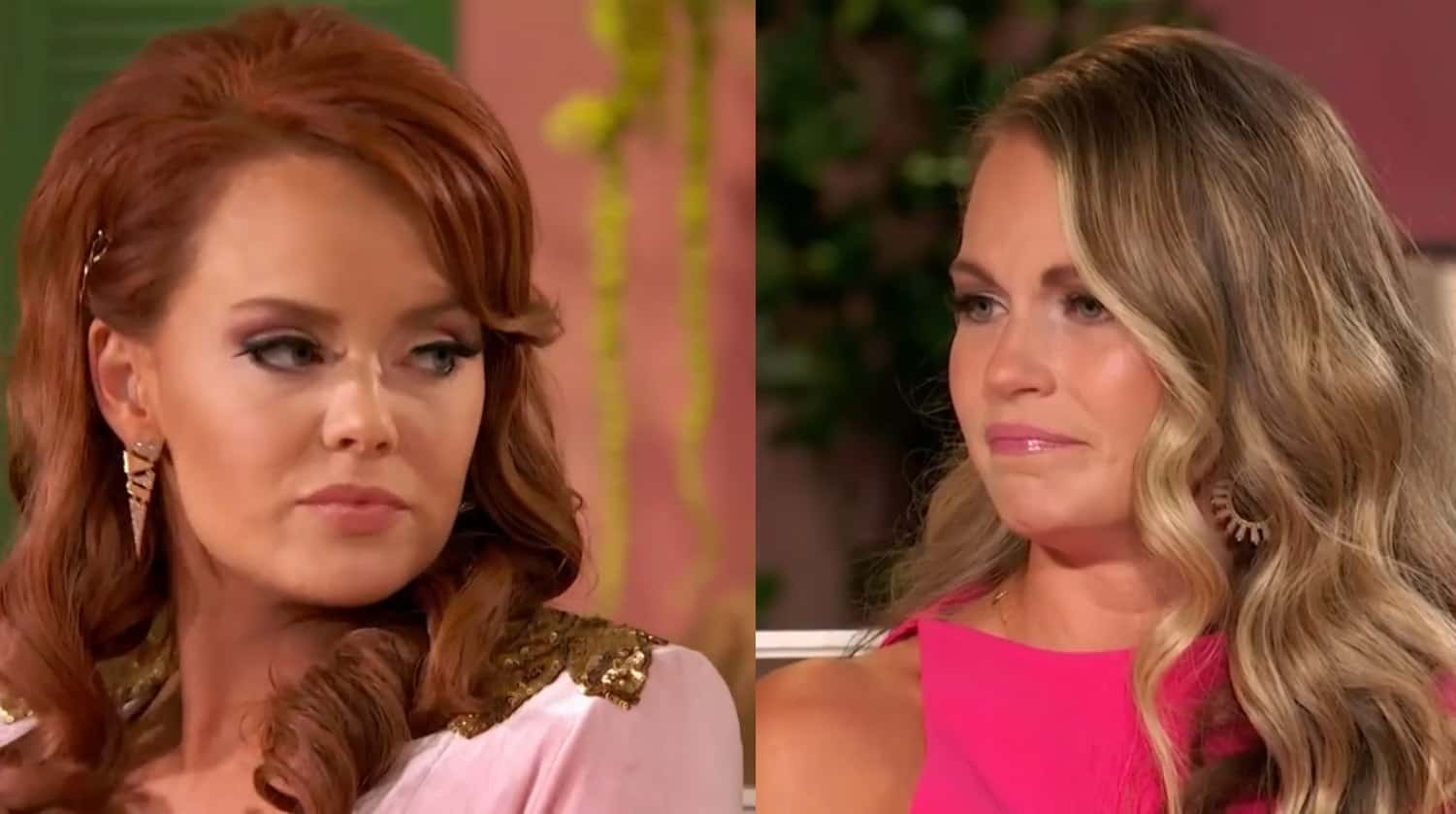 Charleston has invaded NYC! “I’m excited to see Tyson vs. Holyfield, aka Kathryn vs. Ashley.” Me, too, Cam. Me, too. As the cast readies for the grilling on the couch and “Kathryn’s boobs,” Andy Cohen shouts, “The reunion starts now!” Hold onto your hats…it’s the Southern Charm reunion, part I.

According to Andy, there are a lot of surprises in store tonight. Speaking of surprises, didja get a load of Kathryn’s newest twins?! Holy mackerel… Andy goes around the sofa and greets everyone, but pays special attention to his crush…“Hey Craigy!” (Gag). Everyone gives their greeting to Andy and it is very evident that one cast member is missing. Thomas will not be joining the crew tonight; however, his lawyer wrote a letter for Andy to read. It basically said that Thomas would not be in attendance “as there is a pending investigation.” Holy awkward. But don’t worry, guys! Thomas sends his “best regards to his fans!” (As if he has fans…).

Kathryn chooses not to comment on Thomas’s situation because it’s a pretty heavy duty allegation. Thomas was accused of raping the nanny. Oh boy… To make matters even worse, Ashley, Thomas’s girlfriend, will be joining the crew later on. Woooo!

While on the topic of “the good ole boys,” Naomie addresses the #girlpower this season. Craig rolls his eyes and mutters that “there was no need for girl power. They all dated really good guys.” Too bad the video tape doesn’t lie, Craigory- you’re busted being nasty to Naomie and Andy has the proof. Woops. (Side note: glad your hand has healed!)

Continuing on the “guys suck” rant, Naomie addresses JD, my least favorite dude on the show. Turns out that Liz, JD’s ex, lashed out at Naomie for yelling about JD on the show. Kathryn believes that Liz is still controlled by JD and only freaked out on Naomie because she was feeling heat from JD. Whatever the case may be, Liz and Naomie no longer speak, JD still sucks, and it appears as though the “good ole boys era has ended.”

Spotlight on Momma Cam next. Andy wants to hear all about motherhood and her MIA hubby, Jason. Cam tries to make it clear that because Jason is an anesthesiologist, he is “desensitized because he’s around” hospital stuff all the time. Cam really painted an ugly picture about her husband’s lack of attention during labor, but if she’s cool with it, then who are we to judge? Cam’s always pretty laid back and because of that, she was able to have her baby shower high-jacked. I COMPLETELY forgot about Patricia throwing Cam her baby shower. I also forgot that Patricia man-handled the guest list and didn’t even approach Cam for a list of who she wanted there… #etiquette

Speaking of the baby shower, of course Andy feels bad for Craigory when everyone laughed at him for his “homemade teddy bear” gift to Cam. It really WAS a pretty pathetic sewing attempt, but after seeing everyone chuckle at his creation, Craig says, “I can never remember why I am friends with these people.” And that he “can sew in 2D and not 3D.” Uh, what?! Naomie is totally thanking the Lord for getting out of that relationship…

Moving right along…it’s now Craig’s turn. Re-watching his antics this season makes me cringe whole-heartedly. I mean, he sewed, lied to a life coach, and wounded himself with a butter knife so severely, that the joint is still stuck and he has to go to physical therapy. Craig shares that he is “actually an attorney” now, but Shep suggests he be a “pillow litigator.” Ouch. Craig brushes off the gay rumors (sorry Andy) and explains that sewing is his outlet post break-up with Naomie. He claims it all comes down to “creation.” Despite his creative edge and belief that “deadlines are arbitrary,” Craig did blow a huge opportunity with Patricia, yet doesn’t realize what he lost. Andy desperately tries to explain how to be a grown up 101 to Craig, but it’s basically like talking to a wall.

Craig claims that Naomie only feigns happiness with her new life and her new relationship and that he is over it all. He is very clearly still harboring feelings toward Naomie, but going about it in a way that a 12 year old boy would: he starts being mean to Naomie. He even goes as far as bringing Kathryn into the mix. Craig states that Kathryn told him that Naomie told her (you following that?) that Naomie is no longer into her new dude. Naomie vehemently denies this happening and is absolutely livid at both parties.

Naomie and her new nose seem to really cause angst in Craig’s life, as he thought she was beautiful just as she was. Comments like this cause Andy to believe that Craig is still in love with Naomie. Craig says he “despises” Naomie and hates her, but we all really know he still loves her hard. I mean, everyone on the coach thinks so, too.

In the mean time, Ashley, Thomas’s witch of a girlfriend, preps for her big reunion debut. She looks like she needs a cheeseburger and a sedative. Ashley is turnt up and we know that it’s not gonna end well.

Andy is highly impressed with Kathryn’s second year of sobriety and she does deserve a round of applause (although her behavior at Patricia’s ball was slightly questionable). She discusses her embarrassing job interview for Gwynn’s and laughs it off. Despite her tanking the interview, she is now a Gwynn’s “brand ambassador” (whatever that means). Sounds like she’s just a glorified Instagram model. Life is totally looking up for Kathryn. She has 50/50 custody of her children, but still has to take drug tests per Thomas’s requests. Interesting that the alleged rapist can control his ex-baby mama…

Kathryn states that she has not seen or spoken to Ashley since Patricia’s ball. I don’t blame her. At least Kathryn knows that she has a support system of “friends” on the couch with her. The reunion takes a rather emotional turn when Cam apologizes to Kathryn, making it clear that she sees Kathryn more as a “victim” of Thomas’s manipulation. Cam even tears up talking about what Kathryn has gone through over the years. Motherhood has definitely softened Cam big time! She is now Kathryn’s #1 cheerleader and it’s a nice change, considering Cam used to bash her left and right in seasons past. Kathryn agrees that Thomas is a very “convincing” man.

Cam cannot get over how “poised and put together” Kathryn is, despite having gone through hell the last few years. She reminds Kathryn that they will always be in her corner. Kathryn states, “I’m a different person but a better person.” Let’s hope so… Part II of the reunion brings Ashley, and we all know how she tries to bring Kathryn down…except this time, there’s no Thomas there as back-up for Ashley….not that he does much except smirk anyway…

TELL US – THOUGHTS ON THE SOUTHERN CHARM REUNION PART I?