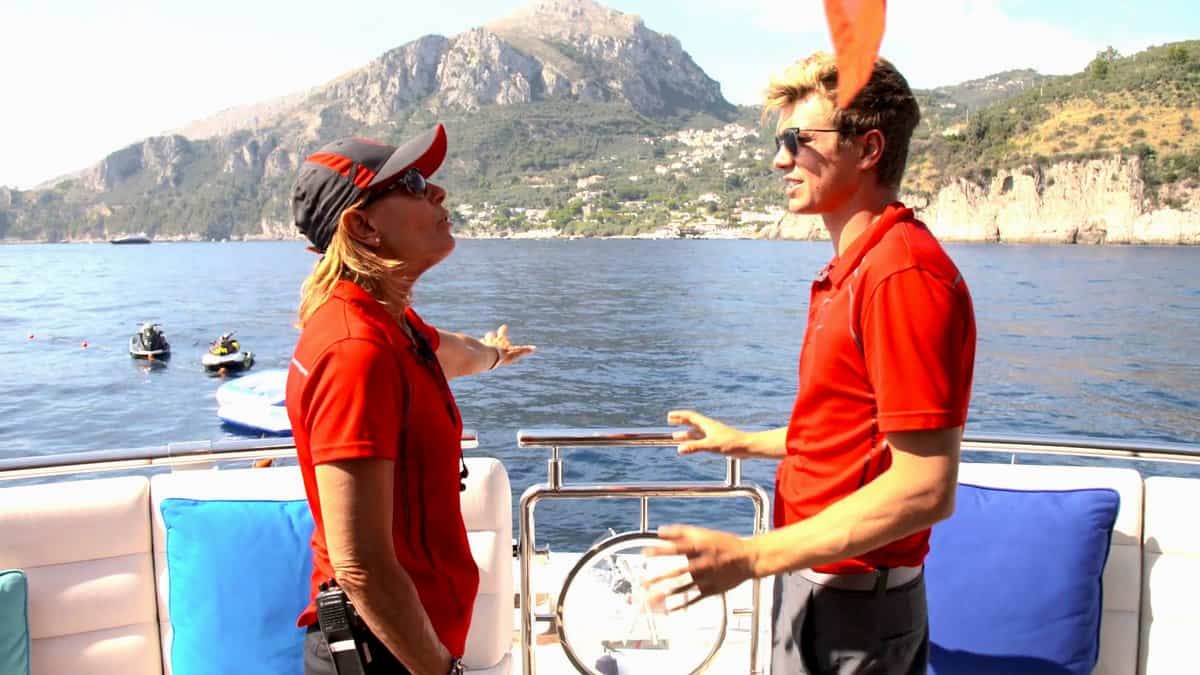 Here’s hoping that Hannah’s “anxiety attack” passes sooner rather than later, Jamie’s whooping cough subsides, and that Kenny, Mr. Anti-Onions, all come through on this episode of Below Deck: Mediterranean.

Anyone else thinking that Hannah is just nursing a nasty hangover? Seems like exceptional timing considering that Kenny, the world’s worst charter guest, is back for a second round. Hannah “rests,” as per Captain Sandy’s orders, but she feels like everything is coming to a head. She explains she is “falling in love with Conrad,” has Sandy up her a*s, and her friend is hooking up with some she “despises.” Life. Is. Hard.

The charter guests ask for a picnic lunch and the crew was able to make it happen for the guests, despite being two crew members down. Captain Sandy checks in on Jamie, who gets teary finding out that the guys are working extra hard as she tries to get better. Conrad is actually pulling his weight (coincidence that he’s working when Hannah is not around? I think not…) and everyone is trying super hard to please Kenny this time around, especially chef Adam.

Somehow, the crew manages to pull off a picnic lunch for Kenny and the gang and everyone is working like a well-oiled machine. Everyone is doing JUST fine sans Hannah. I mean, Adam is, “pumped with Brooke right now. I’m pretty sure she just pulled off the fastest beach picnic in history.” And I love how Kasey straight up calls Hannah out on her shenanigans. “Is Hannah hungover or does she have bronchitis like Jamie?” LOL.

Over at the picnic, Kenny seems pleased with Adam’s lunch creations and they head back to the yacht. Because the crew is short-staffed, everyone’s working hard to make sure the guests are satisfied. After lunch, the slide is set up and the drinks start flowing. Conrad has an internal battle with himself, since he wants to check on Hannah, but knows he is walking on thin ice with Captain Sandy. He just doesn’t want to “abandon” Hannah. Insert eye roll here.

Adam whips up a quick meal for the crew and preps for a late dinner for the charter guests, who are very clearly getting schwasted. As the night wears on, more and more wine is getting drank and the guests look like they are gonna pass out at any given moment. Luckily, the stewardesses are doing a fine job of communicating with one another, and Brooke is pleased to see that Kasey is putting aside any personal issues with her to make for a pleasant charter.

While Adam slaves away in the kitchen, Brooke has a hard time rallying the guests from their cabins. According to Adam, “this is classic yachting.” It just sounds like classic drunk clients. Against Brooke’s better judgment, she goes knocking on Kenny’s door to try and wake him up for dinner. Four out of the six guests wait for their primary charter, Kenny, and eventually, Brooke is able to get Kenny to dinner. Adam is beyond pleased with Brooke’s organization, communication, and drive to make the charter run smoothly. #Hannahwho?

As Captain Sandy joins in on the dinner service, Conrad snuggles up with Hannah and has no problem falling asleep while everyone else on the boat slaves away. These two…The guests legit cheer on Adam post dinner and you can see the stress leave the guy’s shoulders: he done good.

The next morning, Hannah is sucking it up and returning back to work. I wish she wouldn’t, for everyone’s sake. She looks miserable, despite her mantra, “everything is going to be just fine. This is just a moment of time.” Hannah checks in with Kasey and wants to hear how the charter went. You know she is p*ssed when Kasey explains that it went great, so Hannah tries to get Kasey to turn on Brooke by discussing Joao. Hannah knows that Kasey is still a bit hurt that Joao chose Brooke instead of her, but Kasey is onto Hannah’s attempt at a mean girl’s gossip session. “Two charters ago, you wanted to fire me.” Kasey doesn’t like being Hannah’s “chess play” as they gossip about Joao and Brooke… Also re-entering civilization is Jamie. Even though she is still hacking up a lung, she wants to rejoin the crew. (Side note: Is it me or does it look like Colin is never doing anything?)

Brooke lets Hannah know that Kasey was “awesome” yesterday, and anyone can see that Hannah is a bit put off that Brooke was able to handle the charter swimmingly. To pour salt into Hannah’s wound, even Kenny seeks Hannah out to let her know that Brooke did an excellent job the night before and that the guests all want “Ice,” aka Joao, and Brooke to date. If they only knew… When Hannah tries to be cute and ask who she should date on the boat, Kenny retorts, “They all seem too young for you.” Hannah agrees and claims she “feels like a grandmother.” HA.

As Jamie spreads her disease throughout the yacht, the crew serves breakfast and readies for the day’s activities; however, Hannah is having a hard time organizing the water toys with Conrad. When Conrad gets called out by the captain for being a mess, he states, “I’m getting told ten different things.” Captain Sandy demands to know who is causing the unclear messages for Conrad and she makes it known that she does not appreciate the Conrad today. Furthermore, she lets him know that his focus is slacking now that Hannah is back from the rock she crawled out from under. Sandy warns Conrad not to “revert back.”
Surprisingly, Captain Sandy seems pleased with the “new” Hannah and approves the afternoon plans for the charter. Interesting that Hannah and Conrad are the only two cast members heading to the coast with the guests (despite Kenny’s request to be taken out by “Ice” and Brooke). It’s like a built in date for Conrad and Hannah and I can’t help but hate them.

As Conrad and Hannah have a grand old time, the crew works hard to ready the yacht for their arrival….but no one has talked to Hannah. Captain Sandy specifically told Hannah not to be gone for hours, especially because Hannah has been “down for 24 hours” and hasn’t pulled her weight on the boat. Sandy, on her walkie-talkie, yells, “Get Hannah back to this boat now.” My has her tone changed.

Hannah cannot imagine why the captain is angry with her and as she awaits her return, Captain Sandy paces around and is beyond livid. She even goes as far as saying, she “wants to fire her f*cking a*s.” Once Hannah gets back on the yacht, Sandy tells her, “Get away from me. Go to your cabin. I am close to firing you.” Hey Hannah, that should really add to your “anxiety,” huh?
To be continued…

TELL US – THOUGHTS ON THE LATEST EPISODE OF BELOW DECK MEDITERRANEAN?