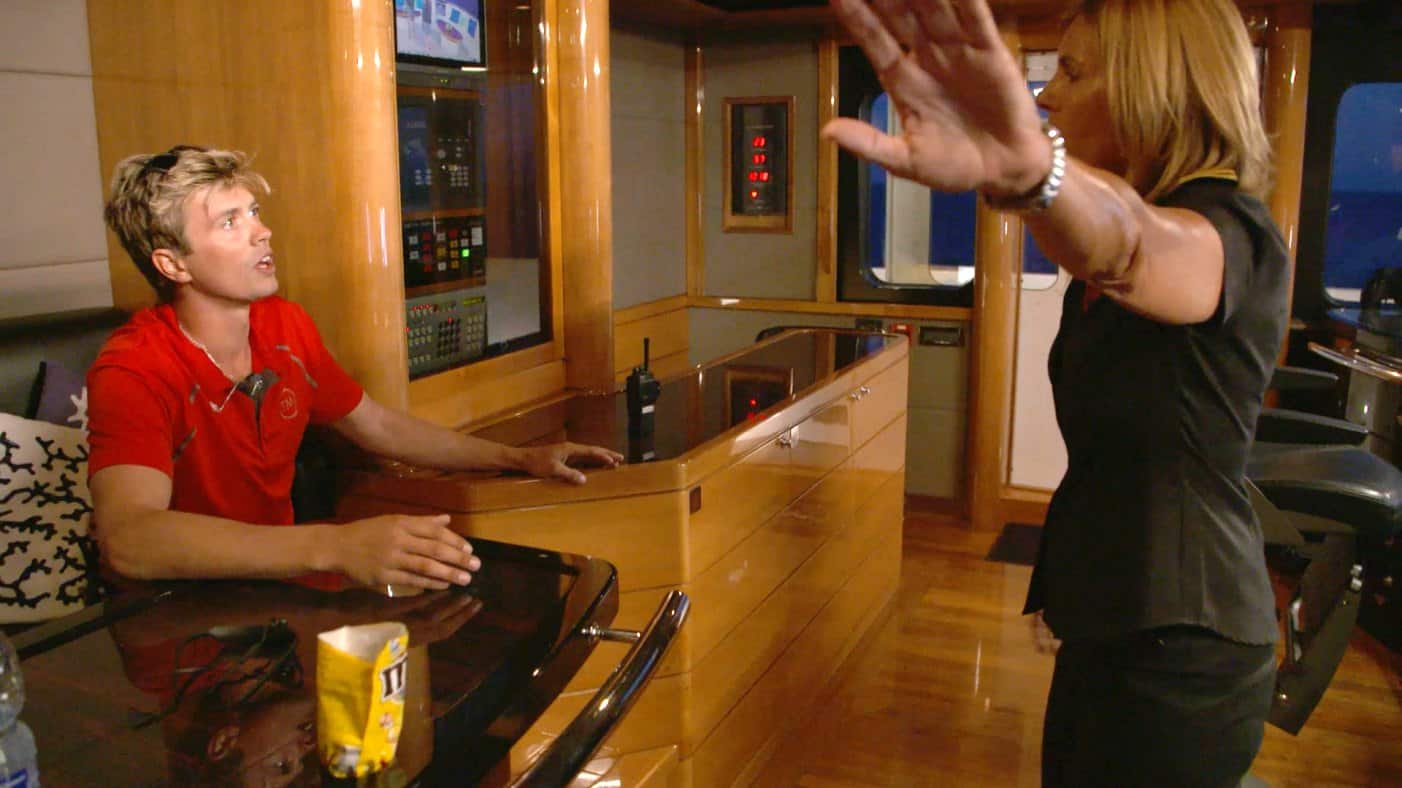 Am I the only one chanting “FIRE, HANNAH!” over and over again? I hope Captain Sandy acts fast while she is still livid with that troll on this “to be continued” episode of Below Deck Mediterranean.

On day two of the charter, Captain Sandy has had about enough of Hannah and her antics. Last episode, we saw Sandy send Hannah to her cabin, like a teenager who came home past her curfew. With Hannah out of her face, Sandy calls for her next victim. “Conrad. Come see me on the bridge. Sit down. What happened tonight was manipulative.” Sandy makes it perfectly clear that she is angry that Conrad and Hannah were off of the boat for 5 hours. Conrad is super confused why he is getting verbally attacked, as the charter guests were pleased with their little venture. Sandy sounds like an angry, drunk girlfriend. She is totally displacing her angry and taking out her frustrations about Hannah to Conrad. Sandy’s all over place with her finger pointing, but eventually she sends Conrad back to work.

The tension is thick on the ship and the girls are starting to get frustrated that they keep covering for Hannah and picking up her slack. Conrad is wishing he stuck to his tried and true words: “don’t screw the crew” because currently…he is in hot water. As the charter guests ready themselves for their dinner, Brooke and Kasey continue to strengthen their friendship, despite the Joao love triangle.

Hannah is still “banished” to her cabin like a child until she is finally called to get chastised by Captain Sandy. Hannah is snotty and unapologetic. Sandy rants on and on and the friggin “one coke!” To be fair, Hannah DID say she should be right back and then five hours later, she rolls back to the boat. Therefore, it is baffling that Hannah is astounded by Sandy’s fury. A raging Sandy spits to Hannah,“The rest of this charter, you stay away from me.”

I love how the other crew members have to still stay focused whilst the drama unfolds. There goes Hannah again…inconveniencing everyone else…
Later, Sandy admits to Conrad that he got the brunt of her anger when she should have taken it out on Hannah. Conrad accepts her apology and they hug it out. Wonder if Hannah would consider that cheating?? She totally would. Meanwhile, Hannah organizes an “onion hunt” for Kenny and his buddies. Hannah is being a total try hard and has turned into a creepy robotic version of her best self. She is actually communicating with her crew and being friendly to the guests. It’s kinda gross cuz I know she is just being an absolute kiss a*s. I mean, she’s popping bubbly for the newly engaged guests and chanting them on while they hunt for onions. At the end of the onion hunt, Hannah awards the winner with the honor of throwing chef Adam off the boat the next morning. Hilar. Once the guests head off to bed, Hannah and Conrad have a forbidden meeting ala, Romeo and Juliet. They exchange sweet nothings (complaints) and bid each other ado (make out). Woof.

Bright and early the next morning, the crew readies themselves for the charter’s final hurrah. Adam gets thrown from the boat by Kenny-No-Onions, Jamie is still hacking up a lung, and Joao is still kissing up to Captain Sandy. Conrad keeps stewing over his Captain Sandy exchange the day before and is displeased that Brooke and Joao are in a relationship on the boat, but Sandy doesn’t have a problem with them. Should have chosen your boat hook up a little smarter, Conrad…

(Can we all just agree to leave Colin at the next port? His “humor” is annoying me, as are his “raps.”)

As the crew says goodbye to a very happy Kenny, they all eye up the very THICK tip envelope. Now that the charter guests go on their merry way, Captain Sandy takes a moment to touch base with Hannah individually. She reminds Hannah that “watching you physically shake and you telling me you’re afraid you’re falling in love” is not a good look for the boat. As I type those words I realize how painful Hannah truly is. Captain Sandy asks Hannah if she can finish out the charter season and Hannah responds yes, but her tone is condescending and snarky. FIRE HER, Sandy.

At the tip meeting, Sandy decides to address the “elephant in the room”:aka the drama that comes with, in the words of Conrad, screwing the crew. “This is a big f*cking boat with a lot of crew and a lot of emotions.” She makes it CLEAR that she doesn’t want to hear about anyone’s relationship and that she needs her crew to do their jobs. Then, Sandy goes on to address the quickest beach set up with two people down… “I wonder why that is…” OUCH, Captain. Sandy goes around the table and compliments most of the crew (even Sandy forgets Colin!) and then hands over their whopping tips! The amped up crew has a little more pep in their step when they clean the heck out the boat before they head out for the night.

While the crew readies themselves for the evening’s festivities, Conrad yells to Hannah, “you owe me fifty Euros.” Oh Conrad. If you only knew then, at that moment, how those words would haunt you for the rest of the night. Whilst in the cab to the restaurant, Hannah makes it clear that she dates men with money and one man even bought her a car. She says to Conrad that “Apparently I’m not getting a pack of cigarettes from you.” Hannah is not letting the whole “you owe me fifty Euros” comment go and poor Jamie has to stomach the couple bicker back and forth in the cab.

Hannah repeats, “I’m not used to a man telling me I owe him 50 Euros” and now the WHOLE table knows about the newest Hannah/Conrad drama. How embarrassing. I can’t imagine that Conrad is pleased to know that everyone’s in his personal business. When he gets a chance to talk to Hannah one on one, Hannah tries to explain, “It’s not about the money. It’s about the fact that we just started dating…” To be honest, I’m surprised that Conrad has withstood the wrath of Hannah for THIS long. She is absolutely impossible. Side note: Adam seems to be moving in on Hannah, amiright? He is the shoulder for her to cry on and even goes as far as giving her his flannel. Keep an eye on those two…

Hannah gets let down by Conrad when he tells her that he believes a relationship should be “half and half.” Hannah states that it’s about her “adjusting her lifestyle” to one that Conrad “can afford.” She knew that that was a low blow and said it JUST to hurt Conrad. Man. Hannah is fresh. And it doesn’t help that she sits there with a smug look on her face the whole time. The drama is boiling over and Hannah hangs back as the gang heads over to a club. Conrad looks MUCH happier now that Hannah is not in his face moping around. She has a solo pity party, but eventually makes her way to the club.

The moment Conrad sees Hannah, his whole demeanor changes and he literally gets the fun sucked out of him by Hannah, the grim reaper. Conrad follows Hannah outside like a puppy and he asks Hannah which guy she wants: a guy with money, or him. Hannah refuses to answer his ultimatum. Conrad cannot get over the fact that Hannah is “digging for money” and ends their relationship. As Hannah storms away, Adam sliiiiiiiiiiides into the cab with her. I knew it!!! Something tells me Conrad is gonna have a way better night with Hannah out of his hair…