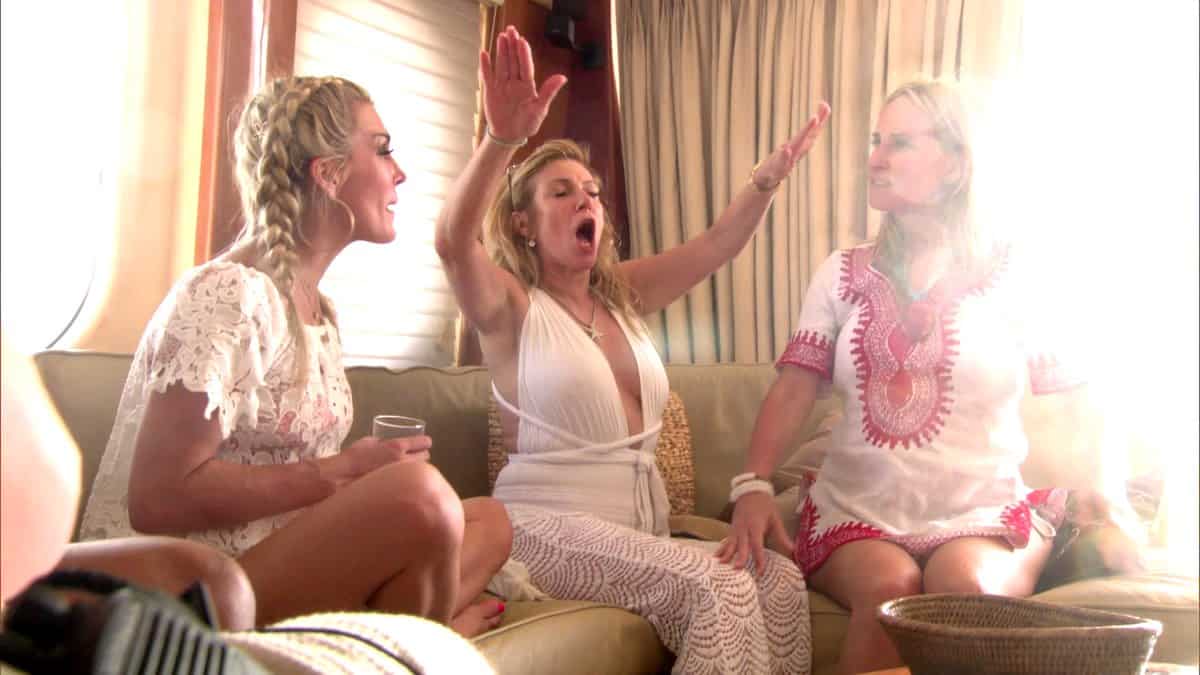 If you happened to miss last night’s episode of The Real Housewives of New York City, do yourself a favor, and check it out. It was wall to wall drama! There’s quite a bit to unpack, so let’s just dig right in, shall we?

When we picked up with the ladies, everyone was still reeling from the disastrous dinner the night before, and just wanted to eat breakfast in peace. But Luann was rehashing her argument with Dorinda, and the fact that she had used her “Countess” title as a dig.  She said it was always the first thing everyone went to, and from now on they could all just call her “Lu.”  Just then, Dorinda walked outside to join them, and Luann informed her that she could just call her “Lu” as well.

Dorinda was ready to go again, and had actually expected Luann to apologize to her, so she said “I’ll do anything I want after everything I’ve done for you.” Luann wanted to know exactly what it was Dorinda thought she had done, and Dorinda said that she’d been there for Luann “morning, noon, and night.”

At this point, it was already getting a little heated, so Bethenny attempted to intervene on Luann’s behalf, but Dorinda was ready for her too! She turned on her quickly, and told her to “butt out!”  Carole also began speaking, but much more quietly, and only to Luann, and Bethenny told her to “butt out.”

This, of course, reignited their argument from the night before, and the two began bickering. Bethenny picked up right where she left off, and accused Carole of “changing” but Carole didn’t back down. She said that she actually hadn’t changed at all, and just no longer had “24/7” to respond to every one of Bethenny’s texts.  Bethenny said that her own plate was just as full, and she always had time for Carole, besides, she said, it wasn’t just unreturned texts..the time they spent together had changed, as well.

At this point, the other women were just watching them argue, and wondering how in the world they were all going to survive the 90 minute boat ride they had planned when they couldn’t even get through breakfast. Carole had grown tired of the back and forth, as well—and who can blame her?! Bethenny’s been beating this drum all season.  Carole suggested that they all just skip the boat trip, and call it a day.  And by the time the day was over, they’d ALL wish they had done exactly that!

In the meantime, Luann found Dorinda in the hallway, and the two women hugged.  But, of course, making up is never that easy when it comes to these women. Dorinda told Luann that she loved her, but that she’d felt “judged” the night before when Luann told her she was “starting to turn” with her drinking. Luann told Dorinda that she hadn’t been judging her, and that her comment about her “turn” actually had nothing to do with her drinking, and everything to do with her anger.

Luann went on to say that it had really hurt her when Dorinda threw her arrest in her face, especially because those were clearly her true feelings.  Dorinda apologized again, but also wanted to know where her apology was.  Luann said she was sorry if Dorinda felt judged, and explained again how “scary” and “mean” Dorinda had been the night before.  Dorinda said she wouldn’t “let it happen again,” and suggested that they just move on, and not let one instance ruin all of their years of friendship.  Luann reluctantly agreed, but was clearly still stung.

Back at the breakfast table, Bethenny was so busy going on and on about how hurt she was about the “deterioration” of her friendship with Carole that she didn’t realize that she’d returned to the table.  Ramona and Sonja, who were barely listening to Bethenny (Lord knows they’d heard it all before!), tried to call her attention to the fact that Carole was, indeed, sitting two seats to her right, but Bethenny was on a roll and there was no stopping her.

Bethenny continued droning on, saying that she was at a “code red” over the fact that Carole just didn’t seem to “love her anymore,” until finally Carole loudly said “Bethenny!” in an attempt to stop her ranting. But Bethenny just said “fine, you heard me. It’s not something I wouldn’t say to your face.” Carole told Bethenny that just because she wasn’t crying didn’t mean that she wasn’t hurting over the deterioration of their friendship too. It seemed to calm Bethenny for the moment, and the women made the fateful decision to go through with their boat trip.

The “boat” turned out to be a gorgeous yacht, and the women finally began to enjoy themselves in their luxurious surroundings.  Bethenny and Carole even hugged it out again, and said they loved each other.  It was a band aid over a bullet hole, but it would have to do for the time being.

The ladies had a great time, sipping pink champagne, taking selfies, and teasing each other, before docking at a beautiful little bungalow on a small, private island, where the fun continued.  Luann found a dead crab on the dock, and put it into the hammock with Ramona to scare her, and everyone had a good laugh at her expense.

Sonja, the “straw in the drink” at any party began dancing around in her bikini and mooning the other women, who informed her that she hadn’t removed the tag. But she said she was keeping the tag on so that she could “sell it back” at a consignment shop.  Let this be a lesson: NEVER buy a bikini at a consignment shop!

Dorinda, still feeling guilty about hurting Luann, found Bethenny, and began tearfully talking about how much she regretted her harsh words from the night before.  Bethenny told her to give herself  “a GD break,” and reminded her that they all made mistakes and said things they didn’t mean sometimes.  She advised Dorinda to find Luann, and talk to her.

Luann was much more receptive to Dorinda’s apology this time, and listened as Dorinda explained that she didn’t know what had come over her the night before, as she’d been in “a really good place” lately.  Luann advised her to  “be careful” with her drinking because she, too, had felt she was in “a good place,” until she’d arrived in Palm Beach, and her problems had “smacked her in the face.”

Dorinda seemed to take Luann’s words to heart in the moment, but during her interview, she said that Luann was living in a “post rehab pink cloud.”  In her own interview, Luann said that Dorinda really needed to “take a good, hard look at herself.”

Meanwhile, Bethenny must have finally worn herself out, because as she as at a table alone with Carole, waiting on the others to join them for lunch, she completely ignored her, and kept her eyes on her phone.  When the others finally did sit down, Tinsley began talking about her dress, and Bethenny said, not quite under her breath, “just shoot me now. I can’t talk about shopping any more.” Tinsley heard the remark, of course, as Bethenny had intended, and told her that she talked about shopping more than anyone else.  She stopped short of saying that she wasn’t even talking to Bethenny, who actually took the hint, and shut her mouth..for once.

After lunch, Luann and Sonja began practicing their cabaret act, although “cabaret act” is a little generous for what they were doing, as Ramona, Dorinda, and Tinsley provided the beat boxing for their “rap.” And let me tell you, you have not lived until you’ve seen three drunk, middle aged, white women beat box!

Luckily for everyone, the practice was cut short when their guide informed them that the water was “getting choppy” and that they would need to start heading back.  This would turn out to be the understatement of the year.

As the women set off, huge waves crashed against the yacht, bouncing it around like a toy! Sonja quickly became frightened. So much so, that she actually peed her pants as she held on to Ramona for dear life, and asked Tinsley, who had planned the trip and all the activities, what the hell she’d gotten them into.  Tinsley, who often traveled to Cartagena, assured Sonja that it was all “normal.”

As the boat continued to rock violently, Carole began vomiting, and as Bethenny tried to comfort her, a table and chairs came flying right toward her! Sonja continued screaming and crying about “having a kid at home,” Dorinda announced to everyone that they were “taking on water,” Luann said she smelled smoke, and all the while Tinsley kept insisting that it was all “perfectly normal.” But it was anything but “normal,” and just as a siren sounded, the crew had to stop filming and hold on for their very lives!

As it turned out, their yacht’s anchor had deployed, and as it continued to moved forward, it began to stall, causing the smoke and strange noises the women heard.  The resourceful captain had to use a “sword” to cut the anchor, a la Pirates of the Caribbean, and ultimately saved the day.

The women arrived back on dry land, physically no worse for the wear, but understandably traumatized.  They spent their last night partying like it was 1999, and woke up hung over and suffering from explosive diarrhea. Dorinda declared the entire event “an absolute s***t show,” both literally and figuratively, as the ladies happily headed for home, relieved to return to the safety of the big city.

So, the RHONY crew lived to tell their tale, and they’ll be back at it again next week. And don’t think a little thing like a brush with death on the high seas is going to make them take stock and appreciate each other. There’s plenty more drama to come. Stay tuned!

TELL US – THOUGHTS ON THE LATEST RHONY EPISODE? WHO’S TO BLAME FOR THE DORINDA/LUANN FIGHT? IS CAROLE BEING INSENSITIVE TO BETHENNY OR IS BETHENNY BEING OVERLY DRAMATIC?