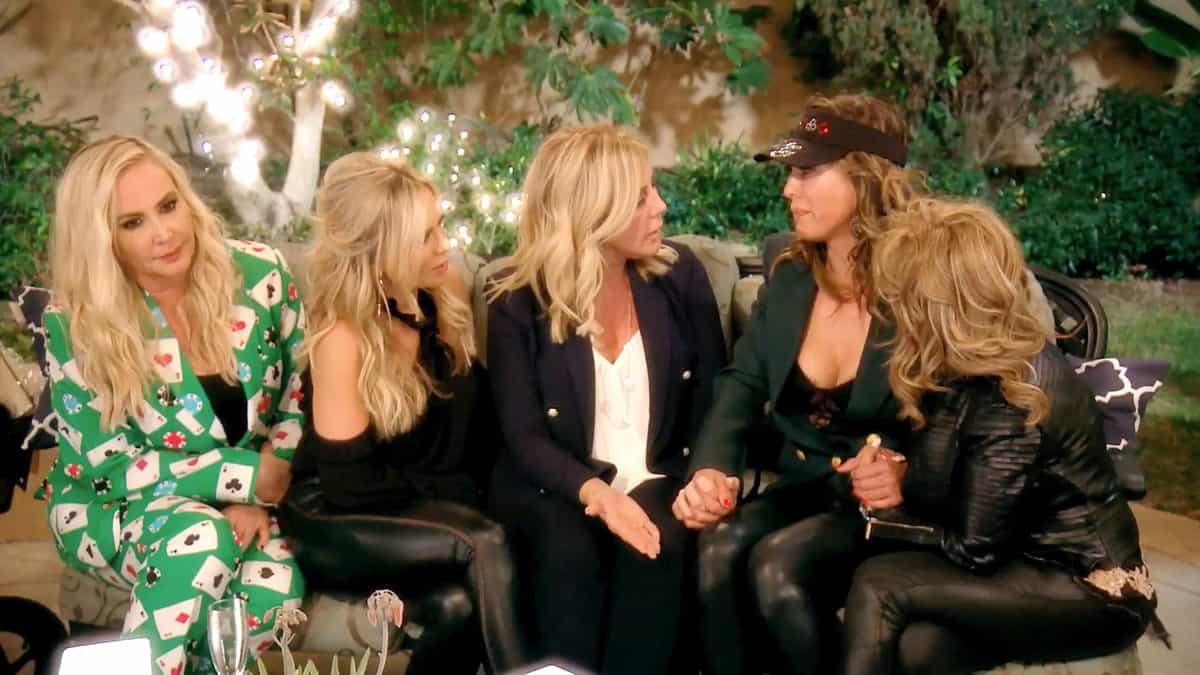 Sigh. It appears as though Gina and Emily are STILL clinging to the cast and that it’s time for a “poker party” on this episode of the Real Housewives of Orange County.

Ah yes. Coto Insurance totally needs to make its seasonal debut. There’s Linda, Vicki’s officer manager. The hair. The jewels. The pins. She’s just as batty as Vicki is, which would explain her lasting this long in that office. Another office fixture is Michael, Vicki’s socially awkward son. Vicki claims that “Michael and I have gotten super close these past five to ten years.” AKA: Her daughter Brianna is off the show and therefore she shoves Michael into the limelight to prove she has a great relationship with her children. Despite what you may think about Michael, he has a live-in girlfriend and this leaves Vicki wanting more. “I am going through empty nest syndrome.” I think it’s more like over bearing mom syndrome. I mean, she better back off a bit, especially if she wants her son to stick around…unlike Brianna did. Her daughter moved to North Carolina to get the hell away from Vicki and I don’t blame her at all.

Oh boy. Kelly and Shannon are out in LA for a single ladies night out. Shannon tries to get love advice from Kelly, who is evidently very good at the dating game. Kelly thinks that Shannon is “going through a little funk” and poor Shan says that she is still not comfortable in her body. Shannon blames her ex for her trepidation in jumping into the dating scene and it turns out that Kelly isn’t “used to being alone,” either. The women cry and bond and “evolve” together. It’s nice to see them getting along, unlike last season.

Gina heads out to go “antiquing” with her gal pal, Tatiana. She shares that she is searching for a gift for Lupe (“Ms. Lupe is my nanny”), since Lupe just got a new house. Gina believes she doesn’t get a lot of “me time” and therefore is ever grateful for Lupe. Insert eye roll here. Turns out that Gina’s bestie, Tatiana, is actually friends with Tamra and knows the gang of ladies that Gina has been “palling around with.” Gina fills Tatiana in on her ups and downs with the women and Tatiana nods emphatically. Gina explains that she feels “constantly judged” by other women because of her Long Island background and is grateful to have Tatiana, as she is from NY, too.

Tamra meets Shannon at the fitness equipment store for “support.” Tamra explains that “I asked Shannon what her fitness goals are.” But the problem is Shannon hates to work out….Almost as much as Tamra hates being left out. Tamra is not good at sharing friends and she tells Shannon that she feels left out because Shan was out partying with Kelly. “I’ve been with Shannon through this divorce and now I’m like, what about me?” It’s a little pathetic that Tamra feels jealous about Shannon and Kelly’s new friendship. Tamra feels that “Shannon really has a habit of just focusing on herself.” Tamra further reminds Shannon that getting drunk is not a good look and won’t solve her divorce problems. Shannon reminds Tamra to “Don’t talk to me about my crazy night with Kelly.” YAS Shannon. Maybe you should help Tamra jog her memory of how she got that boot. That’ll shut her up right quick. #tequila

Everyone’s least favorite housewife is up for her segment. I wish I could fast forward, but alas, it’s important to hear about Emily’s left/right brain occupations: lawyer/event planner. Could this lady get any more extra? She is hosting a poker party with all of the ladies. New BFF’s Shannon and Kelly head over to the party together. Shannon is donning a bright green suit, covered in playing cards. She is “going big in her lucky suit.” Right.
Meanwhile, Emily’s decked in some ridiculous jumpsuit and welcomes everyone to her home, including the Polly Pocket sized Pary. “My mother-in-law is fabulous.” Yea. At least one of you is, gf.

Looks like Gina is not appropriately dressed for this event in her jeans. I mean, the rest of the ladies (sans Shan) are decked (pun intended) and look like they are going to a sweet sixteen. Vicki rolls in late to the party and the women begin dishing on things happening in their lives. Kelly shares that she got asked out by a “Houston Rocket” and further explains that she has a “bunch” of boyfriends…AKA none. Kelly says she divorced her ex because she is “stupid” and then the dramatics ensue. Kelly brings up “date-gate” again and even Gina has had it with this topic. “On Long Island, this sh*t would never fly.” Here’s an idea, Gina. How bout you head back to LI.

Andddd here we go. The women bash Vicki about the same damn thing they bashed Vicki about on the last episode. Gina clearly did not learn her lesson and jumps right into the drama. She calls Vicki out on her antics AGAIN and she tries to make things better for a crying Kelly. Kelly repeats that Vicki is a “constant let-down” for her and that Vicki has never been there for her. Ouch. I thought this was gonna be a poker party?! Kelly suggests that the women stop talking about date-gate (even though she was the one who brought it up…).

To change the subject, Shan shares her great news about her QVC food line. Career Shannon is glowing. Once that excitement wears off, the women rock bedazzled visors while learning the ins and outs of poker. As they sit around the poker table, they throw back shots and listen to Gina’s high pitched shrills. A drunk Gina calls the women “pusses” and she makes fun of the ladies for their Botoxed “poker faces.” I mean, she has a point. Vicki does not like Gina and her loudness, so the three amigas hold a sh*t talking session outside. The ladies talk about the Kelly drama (AGAIN) and how they want to fix the situation. A totally awkward forced apology gets put into action as Tamra gets Kelly to work things out with Vicki. While the ladies are “making amends,” Gina’s throwing back shots with Emily’s sister-in-law. Speaking of in-laws, why is Polly Pocket Pary all up in this Kelly/Vicki apology? She has inserted herself next to Kelly so hard that she is nearly falling off of the bench. After the ladies make-up, Pary reminds Kelly to “get her phone number from Emily.” (Pary is def trying to score a spot on RHOC for next season…)

The next day, Eddie, Tamra, and her son Ryan bring Eddie for his next AFIB procedure. Hopefully this time makes a difference for Eddie. Tamra’s having a hard time with the whole situation and states that this is “testing her fate.”

Meanwhile over at Emily’s circus of a house, her kids are swinging from the chandeliers and are yelling on top of their lungs. Emily states that “My parenting style is whatever I need to do to survive.” Translation: the toddlers run the roost at Emily’s house. I thought her husband Shane was the caretaker. He doesn’t do a very good job, but he does do a great job of judging Gina. Apparently, Shane is salty about Gina’s actions at the poker party and wants an apology from Gina for her loud mouth. Demanding much?

Four hours later, Eddie’s surgery didn’t work. Now Eddie’s doctor wants to put him on a drug that would entail him having to stay in the hospital for four days. Tamra states, “Don’t get scared but there’s a percentage of people who could go into cardiac arrest while on the drug.” Eddie remains emotionless. He doesn’t want to hear Tamra’s advice and gets ultra nasty as Tamra asks him “dumb questions” about the situation. The stress that Tamra is causing him certainly cannot be good for Eddie’s heart condition!