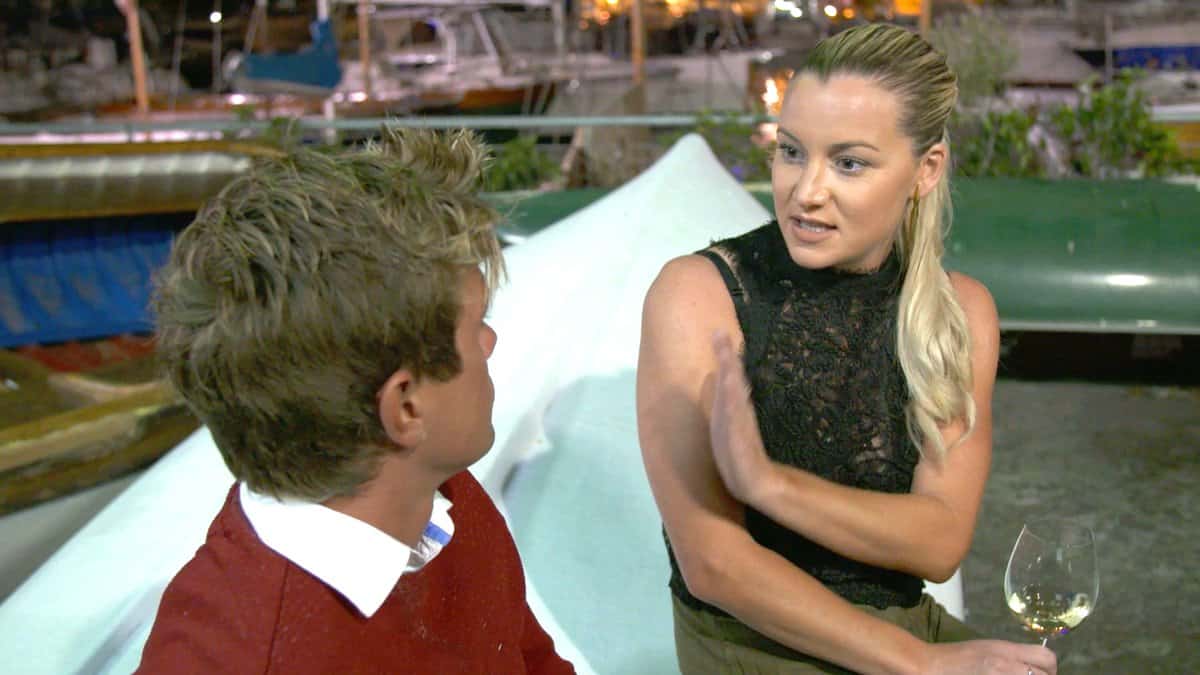 Will Hannah and Conrad break up? Will Kasey admit that she still sweats Joao? Will Colin actually have screen time? All these questions and more are bound to get answered on this episode of Below Deck Mediterranean.

While the primary charter spits out more motivational quotes such as “together everyone achieves miracles,” Brooke tries to explain to Hannah that she “feels taken advantage of.” Hannah cannot believe someone would question her work ethic, if we could even call it that. I mean, this isn’t a new problem. In seasons’ past, Hannah has been questioned by various crew members regarding her lack of work. Even Chef Adam admits that “Hannah falls short in being a manager of the restaurant.”

Poor Brooke is left in tears after an aggressive Hannah rips her a new one. Surprisingly, Conrad runs to Brooke’s aid and offers advice like, “Hannah is Hannah and you don’t change it.” Naturally, Hannah is seething that her man is checking in on Brooke, but then again, when ISN’T Hannah angry?!

The next morning, everyone is up and at ‘em bright and early (except the charter guests). Brooke fills Joao in how she confronted Hannah and it “went down like a bag of nails.” HA. I’ll say! The boat is finally able to leave the port since the wind has died down, but Hannah’s anger toward Brooke hasn’t subsided any. She confides in Kasey and explains that “Brooke’s changed a lot since she has been hooking up with Joao.” Hmmm… Hannah further states that, “Yea well look. At the end of the day, it really doesn’t bother me.” But I think it kinda does bother her cuz she kinda won’t stop talking about it. Side note: For the love, Kasey. Please stop bleaching your hair. Or whatever the hell you are doing. It’s not a good look. And I cannot take you seriously.

The guests take their sweet old time waking up and this gives Hannah the opportunity to “touch base” with her stews. Hannah states, “I know what I’m doing here” and that she has “never made a guest unhappy,” but the reality is that she’s “got her head so far up her a*s” and messes up on the reg. It’s almost as if everyone on the boat is walking on eggshells around Hannah. We have Conrad questioning their relationship, Kasey sh*t talking, and Brooke crying. And it’s bizarro watching Hannah take on some of Brooke and Kasey’s jobs and it is super apparent that she is trying to make a point to help out more (but to be clear: not in a nice way- oh no. This is passive aggressive 101 right here).

As the guests chow down on some brunch, Kasey and Joao flirt non-stop and the day flies by pretty much without a hitch. Before you know it, it’s time for dinner service. Adam is cooking, Brooke is working, and Hannah just runs around and pretends to look busy. While everyone attempts to avoid Hannah at all costs, it seems as though they can all agree they have had enough of Mr. Motivational Speaker, aka: the primary charter. When Hannah says “If I hear one more positive affirmation, I’m gonna shoot myself in the head” you know everyone concurs.

After the guests finish their dinner, the primary charter guest alerts the crew about “something that I do on stage” (what stage allows this guy to perform?!?). The primary is breaking arrows with his neck and makes it look easy, so therefore when he invites the crew members to give it a whirl, ya better believe they jumped all over it. Eventually, Adam realizes that he has to feed his crew-everyone’s hangry and a hangry crew is never a good thing.

While out for a smoke break, of COURSE Hannah asks Conrad if he “had a good chat with Brooke last night.” Conrad can’t get over the fact that Hannah thinks everything is a personal attack and that she makes everything a BFD. Hannah practically wants Conrad to be her personal cheerleader. Conrad says “I walk around on friggin eggshells” around her and Hannah becomes exhausted with Conrad when he walks away from her as she speaks to him. Can’t these two just break up already?!

In case ya’ll forgot, Colin is a crew member on the boat. He has dark hair and in order to remind the audience about this said “Colin,” Bravo has a plan. Colin’s mom phones Captain Sandy (on her personal cell………) and lets her know that she is in Naples with Colin’s father. They would just LOVE to see their son. Well isn’t that adorable. We are in on the surprise! Captain Sandy keeps this info to herself as the crew preps for the final breakfast. The guests pack up their belongings, the crew gets into their whites, and the expected thick envelope gets handed off…but not before the primary charter guest gives one more declaration: “The trip was motivational and inspirational!” Insert eye roll here.

As the crew sits around for the tip meeting, Hannah gets complimented and takes credit for things she didn’t do (like always). The tip isn’t as hefty as usual, but who needs money when you have Colin’s parents here for a surprise? Captain Sandy does a stellar job of surprising Colin. As his parents roll up to the boat, Colin’s mom repeats “hiya Honey” and Colin cries like a baby. To be honest, I would be crying, too. The guy’s starving, tired, and fed up with the drama. It’s a welcome shock to see their familiar faces and Colin gives them the grand tour of the boat. It’s amazing that his parents came all the way to Italy to see their son and I think it’s just what Colin needed to brighten up the rest of the time on the boat.

Later, after Colin’s parents leave, the crew preps for a night out. Why does Hannah insist on wearing a fake pony tail every time they go out on the town? Hannah brags about alllll of the men she has dated in the past and she does an impressive job of aggravating Conrad in record speed. I’m unclear why this group continues to go out to snazzy dinners together. They have a terrible track history of behaving inappropriately and it’s only a matter of time before someone ruins the vibe. Obviously, Hannah is the one to kill the mood. She burns through Conrad’s soul with her eyes and the expected smoke-break-drama unfolds. Conrad makes it clear to Hannah that he does not like her “massively hard exterior” and Hannah doesn’t like that Conrad wants her to be someone she is not.

As Conrad and Hannah are having what appears to be a break-up fight, Joao kicks his flirting up to the next level with Kasey. It’s unnecessary and I am not sure how much longer Brooke can take his “suggestive” eyes and stares at Kasey. Joao tries to make Brooke look like she is the crazy one, but the reality is, he is a total snake.

In the mean time, Conrad’s patience with Hannah has completely run out. He yells “I hate you calling me sweetheart. It’s the most degrading thing ever” and Hannah, of course, does not apologize or back down. FINALLY, Conrad says the words fans all over have been waiting to hear: “And for that reason I don’t think this is gonna work.” That’s all folks! Let’s see how long these two can stay away from each other…it’s gonna be tough, considering they will be working on the same boat for yet another charter the next day.