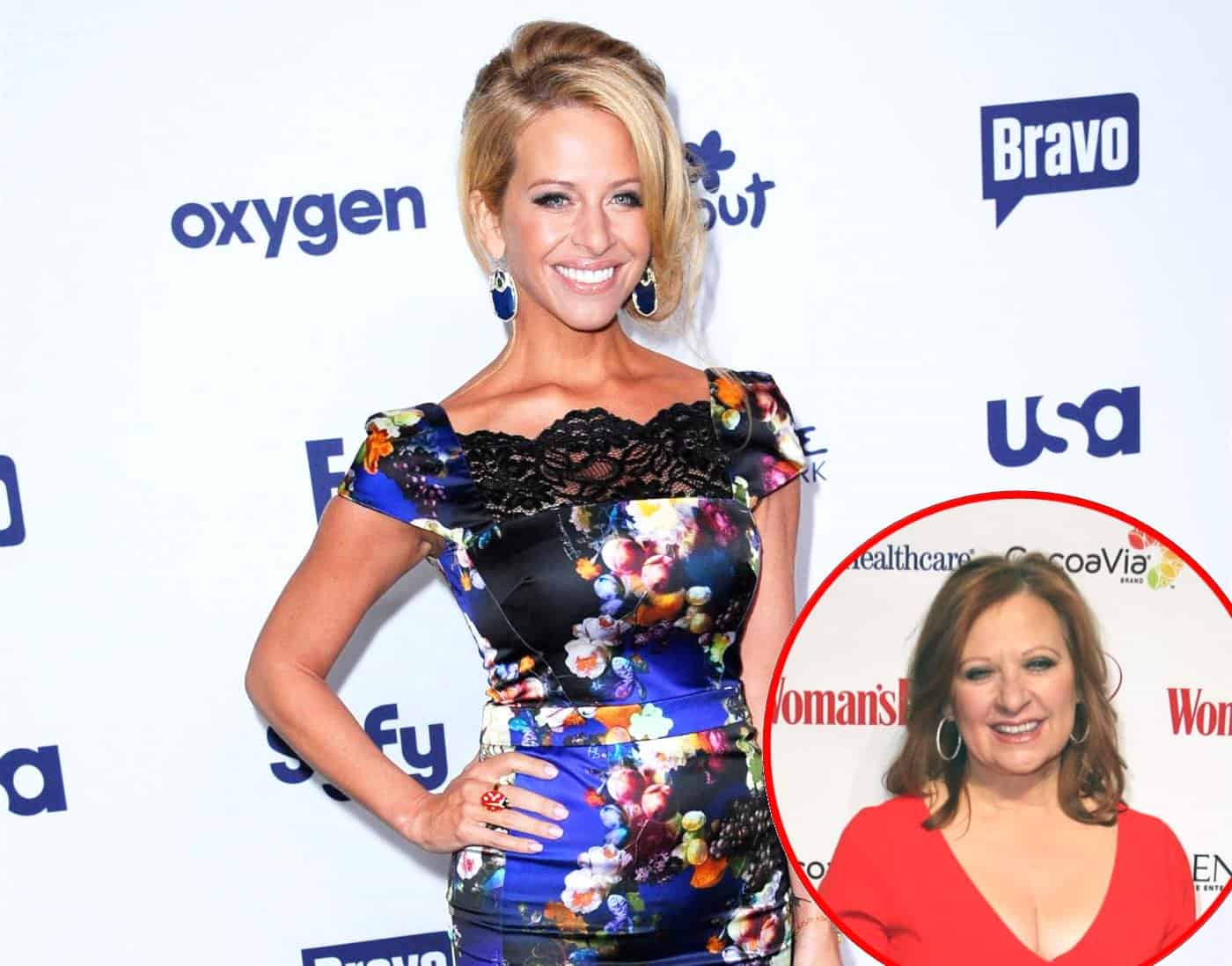 Former Real Housewives of New Jersey stars, and sisters, Dina Manzo and Caroline Manzo have been feuding for years now, and finally, Dina is revealing the real reason for their feud.

Over the years, both have given PC answers when asked to discuss why they no longer speak, but during an appearance on Jeff Lewis Live on Wednesday, Dina opened up about why they are estranged. Additionally, she revealed for the first time that she is engaged and discussed suffering a miscarriage. Also, Dina revealed Caroline is now feuding with their brother Chris Laurita. The reason for that feud is also revealed below.

Dina dished about a lot on the show, so we have decided to split her interview into two parts, with part two being published tomorrow!

First, Dina, 46, revealed she is engaged to her millionaire boyfriend of three years Dave Cantin.

“We’ve always been engaged,” said Dina to host Jeff Lewis on his Sirius XM show. “Well, we got engaged once early in our relationship and then we both realized that it was way too early. And then we got engaged again last year.”

Dina was asked what kind of wedding she wanted, and her response led to some speculation that perhaps she is already married.

“Small [wedding],” she shared. “You’ll learn about it after. Our life is a honeymoon… We are definitely in the honeymoon phase.”

The topic then turned to a wild night of partying that Dina and Jeff had a few years ago (they are close friends in real life) and Dina surprisingly revealed she suffered a miscarriage during her relationship with Dave.

“I got knocked up that night,” joked Dina before getting more serious. “Well I had a miscarriage. I’m not laughing about a miscarriage. It was very… I mean come on, I was 40, how old was I at the time? 44? I didn’t know you could get pregnant at 44.”

Not surprisingly, Dina was asked about her ongoing feud with her big sister Caroline, as the two have now been estranged for years. Jeff asked Dina if she thinks appearing on the RHONJ changed Caroline.

“Yeah, I think we all changed,” she admitted. “There was a point when I left, cause I really quit after season one but part of my deal was that I had to film for some of season two, when I didn’t recognize who [Caroline] was anymore that I said I’m out.”

Dina then went on to open up about what she believes is the real reason for their feud, stating she felt that jealousy was the root cause of it all.

“I’ll be honest with you. I think what happened was, you know, there’s always some competition in families, so everyone loved when I was like the poor sister, when I was working my a*s off or whatever,” explained Dina. “Although she encouraged me dating her brother-in-law [Dina’s ex-husband Tommy Manzo], I don’t think she loved it too much when I kinda came to her level, as far as like ‘I have a range rover, I got a house in Franklin Lakes,’ so I think that’s where it started.”

She added that she was also unhappy with some of the comments Caroline and her sister-in-law Jacqueline Laurita made about her on season one of the RHONJ.

“After watching season one, I realize here I am saying Jacqueline’s heart is bigger than her boobies. Poor Albie’s wife has big shoes to fill. I was saying very nice things about them, and watching back, they weren’t doing the same for me,” said Dina. “I’m like is there envy going on here? They don’t want me to look good? I don’t know, but it freaked me out.”

Dina went on to spill some more tea as she revealed Caroline has also suffered a falling out with their brother, and Jacqueline’s husband, Chris.

“Caroline does not speak to me [at all],” she revealed. “I think [Caroline and Chris] had a falling out too. She might be good with Jacqueline. You know what, I gotta be honest with you. I really mind my own business. It’s just hearsay. I do know that they are not great anymore, her and Chris. But I don’t know why.”

Fortunately for Jeff’s listeners, a female caller, who was referred to as Becky from New Jersey, called into the live show and revealed she actually knew the reason for Caroline and Chris’ feud! Who is Becky you ask? Well, she just happened to be an ex-girlfriend of Caroline’s son Albie Manzo.

“You guys were talking before about the possible reasoning for Caroline and Chris’ [feud], I’m happy to call in because I used to date Albie and I hope he’s not listening to this,” said the caller named Becky. “He told me it was all because of that damn Black Water and really bad business deals. Chris was being super shady… It was basically bad business deals gone wrong.”

Now, Becky is telling this from Ablie’s point of view so Chris’s side of the story might be much different.

Finally, Dina admitted that she hasn’t spoken to Caroline in “maybe two years,” but added that she maintains a great relationship with her brother Chris.

“Well, Chris, I saw him not too long ago when we lived in Malibu. He came out and we had a nice dinner,” she shared. “We don’t see each other often cause we are on different coasts but we are definitely fine and Jacqueline as well.”

Below are photos of Dina and her fiance Dave. 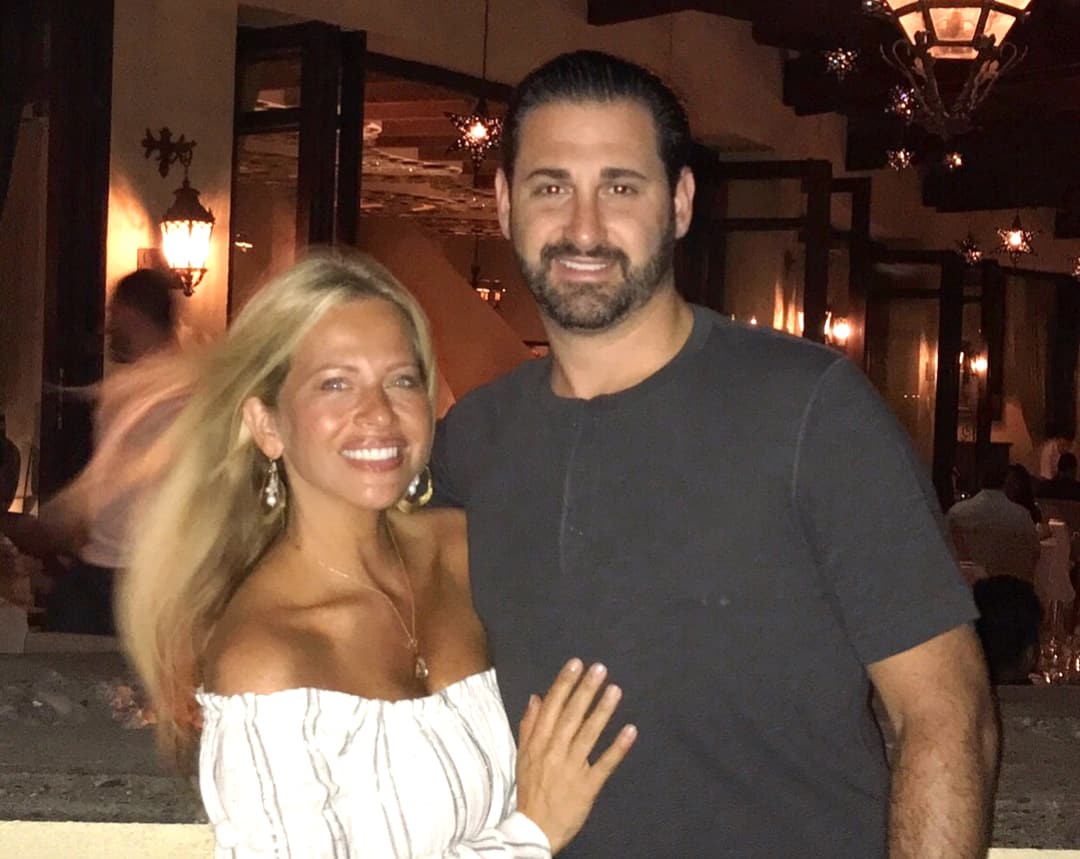 TELL US – THOUGHTS ON DINA’S INTERVIEW? DO YOU BELIEVE JEALOUSY IS THE REASON FOR HER FEUD WITH CAROLINE?