The Real Housewives of Orange County Recap: She Said/She Said 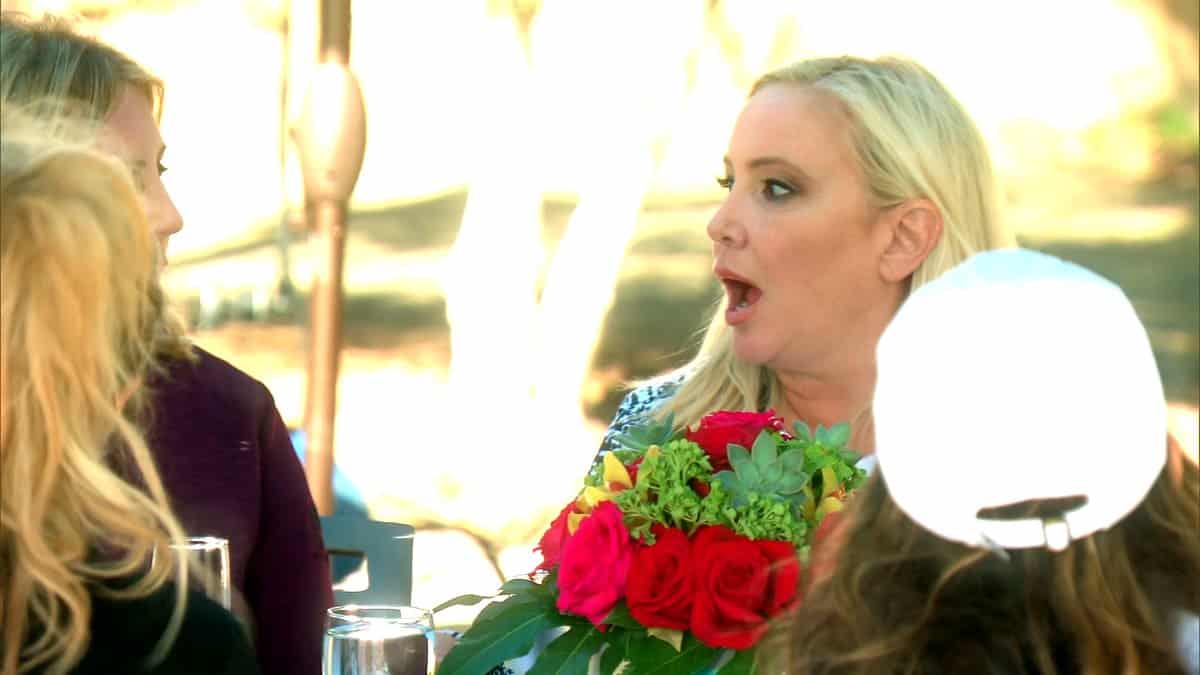 Still not sure how this franchise can be called “housewives” considering only a few of these women are actually wives. Nonetheless, they still have the right amount of drama to keep us glued to this episode of the Real Housewives of Orange County.

Wow, Shannon. You sure know how to pick a trainer, amirite? #swoon. Must be nice to have a trainer come to your house….Is Shannon going to be using some of that big chunk of change David supplied her with to pay for this? Anyway, there’s a lot of thrusting and “putting it in there” whilst Shannon “exercises” and I am beginning to question what kind of trainer Steven actually is… It’s nice, though, to see Shannon trying to make some changes and staying positive.

Tamra has decided to go on a double-date to try and get to know Shane, aka Emily’s husband, aka Mr. Zero Personality. She wants to try and see if he is as terrible as he seems. Upon initial meeting, Shane looks terrified of Tamra’s husband, Eddie. The whole dinner date is a snooze fest. They are chatting about Eddie’s medications and I just want them to get to Gina-Gate. Finally, Tamra asks Shane outright. Shane claims “he welcomed Gina to stop being loud and obnoxious.” Shane’s dry personality makes Tamra think he may just be “misunderstood,” but I think he is a classic a*s.

Jolie is very clearly the brains of the operation over at casa Kelly Dodd. She wears the pants in the mother/daughter relationship. As Kelly talks real estate to Jolie, Kelly regrets spoiling her for all those years. Kelly makes it clear that she keeps Jolie grounded. She IS a bit of a spoiled brat…I mean, I’ve never taken a private plane to camp…………..

“You’re calling me like a puppy.” Yes, Steve. That’s right. Vicki is essentially hoping that she can train you into wanting to propose. Vicki continues to pressure the guy about marriage and essentially hazes him, but it doesn’t seem likely like big Steve is gonna drop down on one knee in time for Vicki’s upcoming birthday. So, instead, Vicki plans a girls-only golf outing. Sounds miserable!

Gina and Emily go shopping. I’m bored already. I’m even more bored when Gina begins talking about Gina-Gate AGAIN. She shares with Emily that the women continued talking about Shane’s behavior the night he kicked Gina out of the house. Gina spills that Shannon began questioning Emily’s marriage. “Shannon was putting her personal issues on you.” Emily is bugging because she is in a “happy marriage” and does not appreciate Shannon trying to stir up more trouble. Clearly Emily and Gina are amateurs with the way these housewives roll. Nothing ever gets dropped. In fact, it gets way worse before it is even halfway better. Sidenote: I DID notice that Emily was not wearing a wedding ring. Hmmm…

Operation fix-Jolie’s-spoiled-attitude is underway at the soup kitchen. Kelly explains that she worked since she was 15 years old, so she wishes to give Jolie a taste of that life of hard work. “Taking her to the soup kitchen teachers her work ethic.” Jolie is doing great out of her wealthy “bubble” despite being up early in the morning and although I am pretty sure that Kelly paid Jolie to say “That was the best experience ever,” it’s still heartwarming to see the kid scooping carnitas onto plates for the homeless.

Tamra and her mother are another excellent mother-daughter duo. Tamra finds out that her mom has a new boyfriend and the women make small talk until Tamra gets onto the topic of Shannon. Tamra explains that she is a little hurt that Shannon’s friendship is very one-sided. “I take a lot with Shannon. There’s a lot of dumping on me and when I get off the phone with her, I’m drained.” Shannon doesn’t ask about Tamra’s life, but has noooo problem unloading on Tamra regularly. It’s only a matter of time before Tamra unleashes this anger on Shannon.

It’s Vicki’s birthday, ya’ll! The golf outing is about to begin and everyone is having a hard time believing that “suddenly Vicki can golf. She is metamorphosing into this Stepford wife.” EXCEPT Vicki is no one’s wife. Not even Steve’s! BTW: Some friend Vicki is. Not sure that this is the easiest outing for Tamra, her boot, and her scooter! Going into the day, Emily is a bit salty. She is not looking forward to seeing Shannon. “It’s upsetting to me that Shannon has an opinion on my marriage. First of all, don’t even compare the two!” I’m still waiting for the second of all….but she never gets there.

Leave it to Tamra. She brought breathalyzers to make sure no one is drunk driving, yet she broke her foot after a boozy Mexican night. Bet you wished you had that little toy before you took your drunk spill! Too soon? These women are absolutely horrible at golf. I am experiencing second hand embarrassment. Thank goodness Vicki is there to discuss golf “etiquette.”

As the girls spilt up into teams on the golf course, we finally hear the words we’ve been waiting for Emily to say to Shannon: “Gina and I had a conversation…” Ah. Grab the popcorn, guys! Emily explains that Gina said that Shannon said she was concerned about “abuse” in Emily’s marriage. Shannon states she would never use the word abuse, especially after everything she has been through with her ex-husband. This seems likely. It also seems likely that this is one big fat game of telephone and the reality of the initial conversation got construed big time.

Post “golfing,” the ladies sit down to lunch. It takes but a few moments before Shannon to ask, “Can I ask you all a question?” Shannon demands to know who said SHE said something about abuse in Emily’s marriage. Tamra goes wild on Shannon (see? I told you! It was only a matter of time before she lost it on Shannon), but Shannon’s not having it. “Tamra, you’re the one who brought Emily up and now you’re blaming it on me?” Touché!

In the meantime, Emily and Gina excuse themselves from the table to have their own damage-control meeting. Gina wants to make it clear that she has Emily’s best interest in mind with these ladies and that she never said that Shannon talked of abuse. This is getting confusing. And, really, who cares already?! Emily explains that because Gina’s “husband’s not around and mine is,” then “he gets exposed to things.” Gina gets p*ssed when Emily makes that nasty comment. Somehow, Emily and Gina hug it out and “put that baby to bed,” but Tamra and Shannon’s fight spirals out of control. It seems crazy that Kelly is the voice of reason throughout this whole debacle. Tamra is attacking Shannon and it is very clear that Tamra has reached her boiling point with her “friend.”

Shannon leaves the table in a huff and Tamra doesn’t even care that she has made Shannon upset. “Shannon’s really good about taking situations and making it about her. What about everybody else?” To be continued….