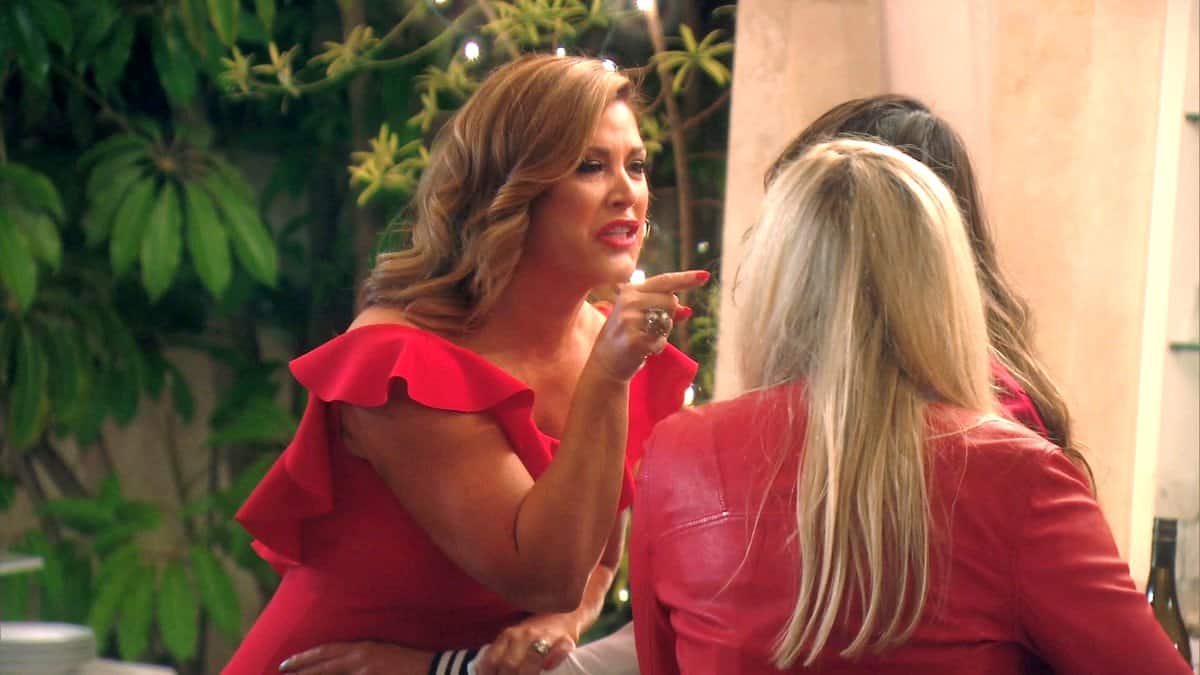 It’s not a birthday party without a fight amongst the women. And it’s not an episode without some husband drama. Luckily, this week’s episode of The Real Housewives of Orange County delivers both.

This week’s fight is between Tamra and Shannon…a shocking twist of events considering those two seemed to be bonding over the seasons. Shannon states that “best friends don’t say that they don’t care about each other’s feelings.” Ah, but Shannon- you forget that Tamra is now best friends with Vicki..again. Kelly does her best to get Shannon back to the table and Kelly suggests that Shannon tell Tamra how she feels.

I am hoping that Tamra is wasted. That’s the only thing that can explain her unnecessary shrieking and dramatics. As Shannon and Kelly head back to the table, Emily explains “I wear the pantalones in” her “relationship” with her husband. Oh God, Emily. Stop trying so damn hard. After a few more jabs courtesy of Tamra, the ladies “move on” and Vicki is left saying stupid things like, “It’s like herding cats with these women.” Well Vicki, that’s a new saying. The reality is that Tamra talks too long and too much about her damn scooter, yet claims that Shannon is all about herself. I think it’s just that Tamra is not getting all of the attention this season.

Later, a drunk Tamra hangs with Vicki and her boyfriend Steve at the golf course. Tamra comes right out and says “when’s the wedding?” Way to make the guy uncomfortable. She then continues with: “Do you guys f*ck? Like rabbits?” Ew, Tamra. Turn the dial way down and quit talking about the non-existent wedding of Vicki and Steve. Sheesh. The next day, over at Tamra’s new house, she preps and plans for Eddie’s 45th birthday party. Um, excuse me…why isn’t your new bestie Emily, the party planner/lawyer, not prepping this event? RUDE. Tamra finds out that Eddie invited David, Shannon’s ex-husband. She freaks the hell out on Eddie (even though it’s HIS party) and demands that Eddie un-invite him because “girl code.” Good call.

Gina’s house of hell is run entirely by her wild children. “Miss Vicki” stops in for some lunch and she explains “I have a really big soft spot for Gina because she is Brianna’s age.” I love that Gina calls her children “spirited.” The reality is that they are maniacs. It doesn’t help that she is essentially a single parent. Gina’s doing the best she can without her husband, Matt, but it doesn’t seem like the relationship “feels right.”
OH MY GOD. Emily’s husband does not know his children’s names. He calls his son the wrong name and then does his best “snarkasm” when asked about Tamra’s upcoming party for Eddie. Emily is very excited for people to meet the “real Shane,” but I have to be honest…the guy isn’t all that and a bag of chips. He is a dud with zero personality.

New (unlikely) friends Kelly and Shannon meet up to chat about Tamra. As these ladies sit down to catch up, Tamra and Gina are simultaneously talking about the Shannon thing. Kelly backs Shannon and suggests that Tamra is lashing out because she has had a rough go with Eddie’s health lately. Tamra confides in Gina and says that with Shannon, “It’s like the world revolves around her sometimes and she just doesn’t get it.” Shannon is convinced that there is an underlying issue in her friendship with Tamra and Tamra’s behavior proves that the ladies have to hash out the problems.

Tamra and Shannon have decided to woman up and confront the issues head on. Due to some “uneven pavement,” Shannon also has a scooter, like her pal Tamra. Naturally Tamra thinks that Shannon is trying to steal her look, but really, Shannon is just “resting her injury.” It doesn’t take long for the duo to start crying about all the sh*t they’re going through and the whole time I’m just staring at Tamra’s bad facelift and her strange ears in this segment. Somehow Shannon gets to the point where she apologizes to Tamra and admits that she “feels horrible that Tamra doesn’t think” she was there “to support Eddie.” Shannon decides to “devote more time” to her friends and Tamra immediately opens up about Eddie’s loss of faith and health issues. Shannon turns into Tamra’s personal cheerleader and the girls hug it all out.

It’s the day of Tamra’s party for Eddie and the ladies all get ready for the festivity, donning red, as per the invitation. Before leaving their house, Emily asks her weirdo husband, “What do you think?” of her awful camel-toey jumpsuit and he retorts, “it’s red.” Ugh. He is the worst. #snarkasm. Tamra is very excited to celebrate today as “This is the first time that we’ve truly enjoyed our house.” Eddie looks like a lunatic in his red suit with hearts and Tamra’s son looks like he escaped from an insane asylum in his sparkling red suit jacket.

Speaking of lunatics, can we discuss Gina’s bizarro introduction to Shane? She reminds us that she has never actually met the guy…only heard his voice from above yelling at her to STFU. Ah, memories!
Kelly and Shannon roll up…pun intended…as Shannon is STILL utilizing her scooter and then wouldn’t you know? The world begins revolving around Shannon yet again. Of all the doofy outfits this evening, I think Steve’s takes the cake. Can we talk about his dorky shirt? It appears that I am not the only one who cannot stand Steve. Steve talked to Page Six a little while back about Kelly and is team Michael, Kelly’s ex. It’s only a matter of time before Kelly loses her marbles on Steve.

In the meantime, Gina (and her pink jacket-did she not get the red memo?!) shares with Emily that she has been having problems with her invisible husband, Matt. She explains that because they are apart from each other so often, it has become harder and harder to do things together and easier and easier to be alone. Emily states that “marriage is hard,” but it is clear that the couple may not make it. Vicki inserts herself in the girl talk and Gina explains that she is actually “ok” when her husband is gone. Vicki shares advice to not give up, but I think homegirl Gina is already on the way to her lawyer in her head. Cuz…that’s how they do it in Long Island.

After getting a pep talk from Shannon, Kelly gets amped up and wants to talk to Steve, Vicki’s boyfriend, about his Page Six story. Kelly walks over and confronts Steve. She, very maturely, lets him know that her feelings are hurt. Steve tells Kelly to “take her drama to another place” and then suddenly Emily’s hubby Shane jumps into the argument. As Steve walks away, Shane states that Kelly is “drunk” and when she yells that she is, actually, not drunk, Shane questions, “So, that’s your normal behavior?” And then that’s it. Kelly is triggered. She calls Shane a “ f*cking dork. That’s what you are. A little twerp” and then continues her rampage. Kelly runs to the girls making fun of Shane.

Turns out that Kelly didn’t realize the “little twerp” was Emily’s husband and thus begins the battle royale. Emily goes HAM on Kelly, screaming not to call her husband names and Kelly demands for Emily to “hit me.” How bout those fighting words? I rewound it. Emily clearly says, “I will kill you” to Kelly and I cannot wait to see Kelly’s retaliation on the next episode.

TELL US – THOUGHTS ON THE LATEST RHOC EPISODE? DID EMILY OVERREACT OR WAS KELLY OUT OF LINE?