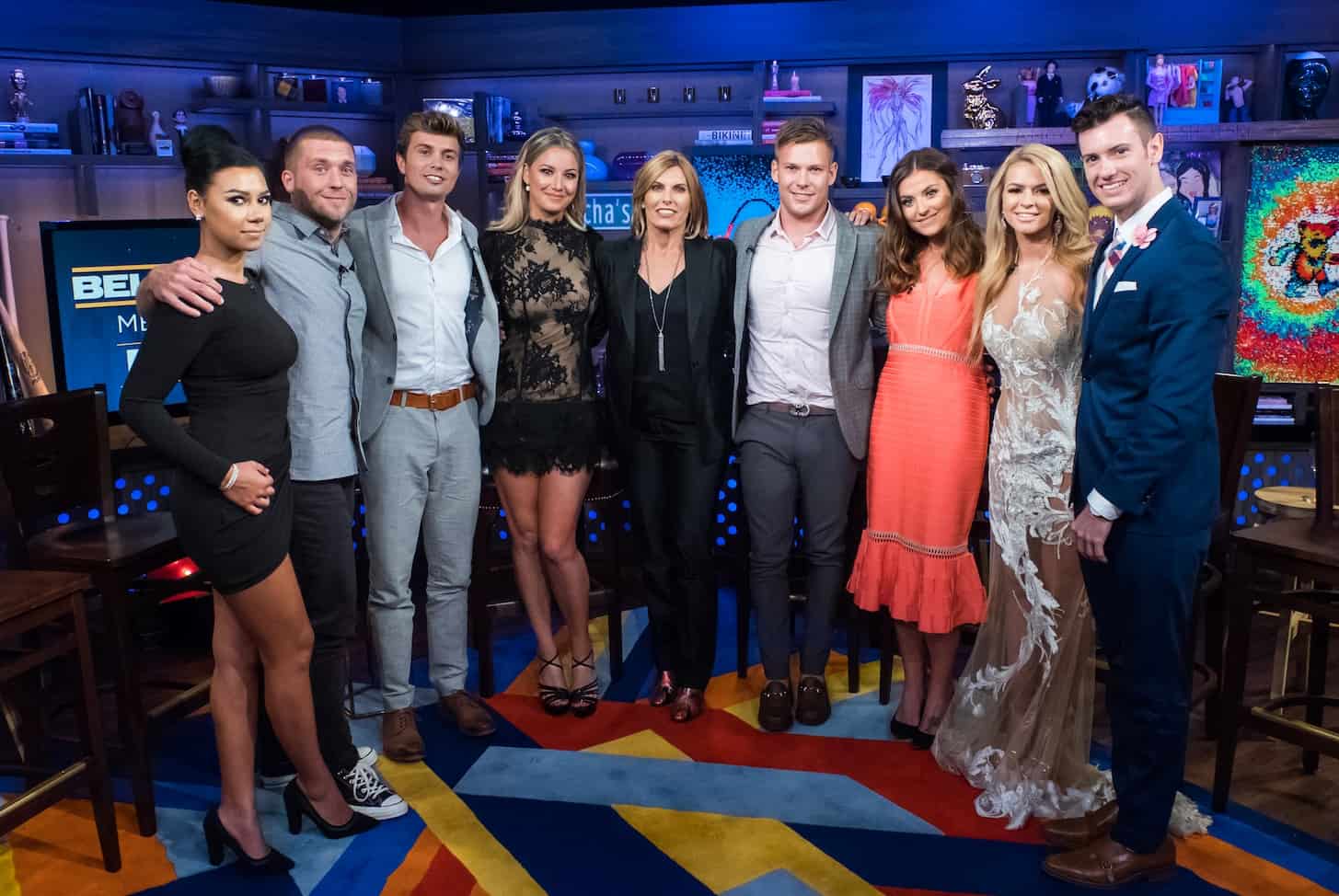 It’s the Below Deck Mediterranean reunion and Andy Cohen is throwing out one liners like nobody’s business. He explains that this season “we got caught in a Bermuda love triangle” (How amazing?) and states to the viewers that he hopes “you listed drama on your preference sheet” because this reunion is full of it!

To start off with, WHY does Kasey look like she is an ice skater/teen pageant girl? Her outfit is absolutely outrageous and inappropriate. She legit looks like a cheap Barbie doll. Not a good look at all… Andy asks the couples of the season if they are still dating and alas, there has been some heartbreak since the show aired. Hannah and Conrad are NOT together.  Brooke and Joao are NOT together and Brooke states that “it all went downhill.”

Chef Adam is the first cast member to be grilled. See what I did there? It is clear that Adam stepped up his game big time for the guests this season and even Captain Sandy says that he “redeemed himself.” He also apologizes for never feeding the crew…the hunger issue may actually explain a lot of choices these crew members made over the course of the season.

Kasey, the wannabe Miss America, attempts to explain her fudged resume, but listening to her talk makes me roll my eyes so hard. She very clearly has difficulty deciphering between right and wrong. I mean, she also over stepped boundaries big time with Joao while he was smooching Brooke. Brooke, ever the lady, explains that the girls haven’t spoken much post show, but that Kasey did “become a good solid stewardess.”

When asked if she is the problem in all of the issues on the yacht, Hannah agrees that she “plays her part in it.” Woah. Hannah admitting she can be wrong?! Are pigs flying? Some of the crew talks about Hannah’s leadership, but Kasey goes as far as saying that Brooke would be a better chief stew than Hannah. And somehow, Hannah remains calm and (dare I say it?) almost agrees with Kasey. Who is this lady and what have you done with old Hannah? (Sidenote: get a load of Captain Sandy’s footwear! Who knew she had that wild side?)

No one can seem to understand who this new Hannah is. I mean during the season “Captain Sandy had to do some below deck meddling” to try and figure out what was causing Hannah’s attitude and terrible work ethic. Captain Sandy has zero tolerance for the petty business that occurred while on charters and makes it clear that she has been around and knows her stuff. “When most of the people here were in the birth canal, I was navigating the Suez Canal.” Woah. Captain Sandy with the burn! She continues hammering away and lays into Conrad. She explains that’s why he will “probably never make it.” Sandy doesn’t feel like Conrad has any respect and even goes as far as saying that Joao would have been better suited for the position. Sandy ends the convo by stating that Conrad “was not present on deck” and she denies playing favorites, although it seems as though she truly does love Joao. Joao sits back and smiles, but it’s only a matter of time before Joao gets embarrassed by his womanizing.

In the words of Andy, “lots to unpack here” when it comes to the crew’s relationships this season. Starting with Joao… One viewer went as far as saying this about Joao: “You have been such a pompous d*ck this whole season acting like you’re the greatest gift to women.” SPOT. ON. Joao does his best to try and make himself look like the good guy, but leave it to Kasey to stir it up. Kasey seems to think there’s more to the breakup of Joao and Brooke. Brooke explains that she felt “like crap” watching the season unfold. Even Andy says that the Brooke/Joao/Kasey make-out session was “fairly devastating.” Kasey just can’t seem to keep her mouth shut. She states that Joao told her that if he and Brooke “had another week on the boat, they wouldn’t have last quite as long as they did.” Kasey says she “doesn’t like the fact that Joao is trying to downplay” his behavior towards her and she is utterly basking in the relationship chaos she has created.

The fact that Joao and Kasey communicated often, even when Brooke was with Joao, is upsetting. Kasey claims that she is “just friends” with Joao, but let’s be real. In the words of Brooke, “there’s just too much water under the bridge” with this whole situation and there’s no saving her relationship with Joao. Joao explains that he left his last job to work on his relationship with Brooke and you can kind of see Kasey stiffen upon hearing this information. Joao further says he “was playing a game” he “didn’t even know” he was playing with Kasey and Brooke. Uh, What?! From the other side of the room, Jamie (you might remember her from this season…the one who had a hacking cough and was sequestered) jumps in. “From what I saw and heard, you’ve said some really romantic things to Kasey.” Jamie wants Joao to admit his actions toward Kasey, but Joao looks confused. Either Kasey is a psycho liar or Joao’s surprised face is a lie. Brooke listens and takes in the news as Kasey so proudly explains she has chatted with Joao often.

NOW Kasey wants to make it clear that Joao is in “love” with Brooke and I enjoy hearing Captain Sandy ask Kasey “why do you reciprocate then?” Joao gets so emotional when discussing his love for Brooke that he needs to leave the stage. I kinda think he was fake crying because when he did come back, his face was completely dry. He slowly enravels all the reasons how Brooke has changed him for the better. Brooke remains doe eyed and stone faced as Joao professes his love for her, but doesn’t show one sign of forgiveness. Bravo, Brooke! Naturally Kasey has to weasel herself into this moment and Andy asks her if she “would be willing to sacrifice her friendship with Joao for Brooke.” Without batting an eye, Joao states that HE would drop KASEY like a hot potato if it meant he could get back together with Brooke. Kasey looks beyond heartbroken to hear him say those words, but maybe that’s the closure she needs at this point.

Time to talk about the cringe-worthy couple Hannah and Conrad. Andy states, “Their relationship wasn’t as smooth as Conrad’s baby face.” Colin states that he thought the duo was a “great couple” and were “very professional,” despite the uber long cig breaks and extra fights. Captain Sandy obviously disagrees with these statements. She feels as though the couple’s behavior “impacted” the way the yacht was run. Speaking of how the yacht was run, Andy brings up Hannah’s “anxiety attack.” He cannot believe that Captain Sandy played into her “love sickness,” but Captain Sandy clarifies that Hannah was legit freaking out. She couldn’t talk and the captain was close to bringing her to a hospital. Hannah blames the cameras for triggering her attack and claims that she was getting “into her head” too much, especially when it came to her relationship with Conrad. There seems to be zero chance of the exes hooking up again, but I think it’s for the best.

“Did anyone on the crew actually like Joao besides Brooke and Kasey?” I had no IDEA about Joao’s drunk alter ego, JessaBob. Like who says that he has an alter ego?! Oh yes… a pompous a*shole. Joao explains that he used alcohol to cope with his feelings. Regarding the photo session with a blacked out Brooke, Joao behaved gentlemanly yet called Hannah the C word. Joao says that he “can’t make excuses for his behavior.” This guy is full of apologies.

Before Andy ends the reunion, he asks each cast member (minus Colin, Jamie, and Adam…because can they even really be considered cast members???) his/her biggest regret of the season.

Kasey: embellishing her resume (not her reunion outfit or her hair color or sticking her nose in other people’s relationships…zero self-awareness)
Conrad: better relationship with Sandy (and sleeping with Hannah the last night of the season)
Hannah: better relationship with Sandy and the last night’s sexcapade with Conrad.
Joao: “where do I start on a list of regrets?” Yea…his list seems to go on and on.
Captain Sandy: not acknowledging when Hannah did a great job (seems to me that Hannah paid Captain Sandy to say that…) She also leaves Joao with a bit of advice: “just be honest.” Easier said than done for that guy…

And just like that…it’s a wrap. Bon voyage to this season!

TELL US – THOUGHTS ON THE BELOW DECK MED REUNION AND SEASON?