Home Featured Posts The Real Housewives of Orange County Recap: A Peace Treaty, a Blind Date, and a Divorce No One Understands

The Real Housewives of Orange County Recap: A Peace Treaty, a Blind Date, and a Divorce No One Understands 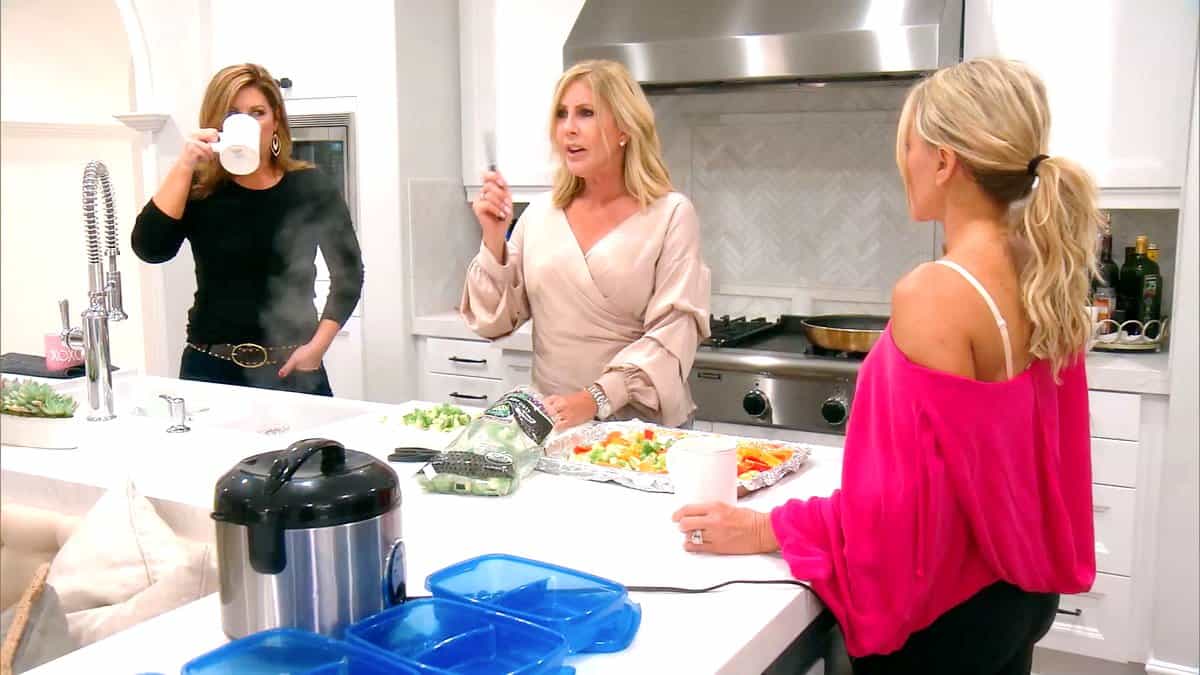 Glad Bravo thought of a super catchy title for this week’s episode of The Real Housewives of Orange County: “A Peace Treaty, a Blind Date, and a Divorce No One Understands.” All we need is a partridge in a pear tree and we are set!

In case anyone forgot, last week Emily “threatened” Kelly’s life by shouting “I will kill you!” after Kelly called Emily’s husband offensive names at Tamra’s party. For a girl from Long Island, Gina does not do a very good job of breaking up a fight. Em is wilin’ and it appears as though she may actually succeed at the death threat towards Kelly. Tamra has no idea what she is walking into: “I go upstairs for five minutes and I come down and all hell has broken lose.” How convenient. Naturally, Tamra needs to have a sit down with Emily and somehow Vicki wiggles her way into this convo. Shane, Emily’s husband, also finds his way to the ladies. He states to Emily, “If I don’t care, why do you care? You’re telling me you’re valuing her opinion?” My, my. As much as I do not like Shane, the guy does have a point. I mean, these women will never learn how to “walk away” from a fight.

In the meantime, Kelly is getting coddled by the other ladies. She spews “You threaten to kill me and you’re a lawyer?!” No, no Kelly. Not only is Emily a lawyer, but she is also a party planner. Duuuuuh. To try and cheer up the mood, Vicki starts with her cheesiness: “I’m all about no drama, everyone get along, and love, love, love!” Uh, ok…Vicki. Later, Kelly begins some new drama and shares it with a few of the girls. She states, “Money talks where bullsh*t walks.” Evidently, Steve-o is only “using Vicki” for money and Kelly wants everyone to know! Drama, drama, drama!

The next morning, Vicki heads back over to Tamra’s to discuss last night’s debacle. Vicki begins to explain how Steve got involved in Kelly’s drama and blames it on some Page Six article. Obviously, “love, love, love” Vicki wants it to be clear that her man isn’t the one stirring the pot. She goes as far as bringing a copy of the Page Six article to Tamra’s to prove his innoncence. Sounds like he needs a good casserole. I think it’s hilarious. Sidenote: What is with Vicki calling everyone “princess” this season? Woof. Emily joins in on the fun at Tamra’s because she clearly doesn’t keep lawyer/party planner hours and because she wants to talk about the events that occurred. As the chit-chat goes on, Tamra spills the beans that Kelly has been spreading rumors about Vicki and Steve’s relationship; therefore, Vicki is livid.

Later that evening, Shannon FaceTimes Kelly on her way to her very first blind date. I have to say that I am proud of Shannon for taking this step, as it is her “first date in 20 years.” The guy, Tom, seems not so bad and he is even a gentleman as he leads Shan over to the table. She is still hobbling about due to her ankle injury. So it turns out that Tom is more of a crier than Shannon andddd is a cat guy. NOW I am pretty sure Shannon will never see Tom again.

Gina heads to Emily’s office to discuss the current situation with her husband, Matt. Gina explains they “couldn’t figure it out” and the fighting escaladed to the point where they don’t want to be together anymore. Gina states that she “doesn’t feel like her marriage has failed, just that it’s ended.” It’s a sad tale, but she seems to really understand the gravity of the situation and only wants what is best for her kids.

Steve continues the birthday “surprises” for Vicki (can anyone explain the Harley Davidson pit-stop the couple made before heading for dinner???) and takes her to a little whole in the wall Mexican restaurant. Vicki acts “surprised” to see her family waiting at the restaurant and I have to imagine it is difficult to plan your own surprise party, no? The hits keep coming. Vicki’s brother Billy flew in to celebrate the birthday girl. Vicki begins a drunken tirade about how she wants to be Steve’s wife and things begin to get awkward. Luckily, more shots are brought in and Vicki’s voice gets stopped for a second as she throws back her tequila.

Shannon brings Vicki along for a trip with Dr. Moon the next day. “Dr. Moon is an energy healer that I have been seeing since my children were born. It’s all about good energy in the body.” Clearly that’s working for you, Shan. After Dr. Moon pricks and probes Shannon, Vicki lays down for her turn. Seems like Vicki has some anger in her liver…and she blames that on her ex, Brooks…naturally. Is someone jealous that Brooks got married before her? I think YES.

Somehow, Gina’s house is quiet…where ARE those lunatic children?! Gina FaceTimes her mother to fill her in on her new found “self-awareness” and the troubles with her relationship with her hubby. Gina breaks the news that she “feels it’s best for our family if we divorce.” Gina’s mom takes the news with a simple, “Woowwww,” and my heart breaks for Gina. It’s a pretty emotional segment.

The date we have all been waiting for is finally occurring: the Emily and Kelly sit-down. Emily says, “I think Shane was in the wrong place at the wrong time.” Ok, but now it’s time to hear Kelly’s side. Kelly explains that Shane butted into the conversation between Kelly and Steve (true). Kelly didn’t appreciate the fact that Shane called her drunk (even though she was), but Emily states that Kelly shouldn’t call her husband terrible names (true). Both ladies apologize for their actions AND their words and Kelly no longer feels like she needs security detail for fear of Emily killing her in her sleep.

These ladies with the boots are hilarious. I think it really shows the age of these women…rocking a boot and ONE expensive shoe. Gina, Shannon, Tamra, and Emily gather for a ladies dinner. They chat about Shannon’s blind date and it doesn’t take long for Gina to let the girls know that she is divorcing her husband, Matt. Smooth segue. Tamra doesn’t help the situation by shrieking, “you can’t get divorced over a job. There has to be more!” It’s a bit of a confusing scenario because Gina calls Matt her “best friend” and she admits to still being attracted to him. Hmmmm. The older ladies all give some of their “divorce wisdom” to Gina and then somehow Vicki gets brought. Gina finds her maternal (gag) and believes that Vicki is truly happy in her relationship with Steve.

Tamra is the first to say that Vicki “does not love that man” (some “best friend” statement). Because Tamra is Tamra and just looooves to bring up issues, she moves onto the Kelly/Emily fight. Shannon shares that Kelly was “actually rehearsing and practicing a conversation with Steve” so that everyone understands Kelly didn’t just dive in looking for a fight. Gina suggests that Shannon should not have egged Kelly on to confront Steve right then and there and even goes as far as saying “I broke up a fight, so was it a great outcome?” BURRRNNN. Shannon doesn’t like Gina’s sarcastic tone and wants Gina to stay in her lane. What else is new? Gina retorts back, “All I’m saying is, I would have done it differently.” Silly, Gina. Guess she hasn’t learned that talking back to these ladies will blackball her for life….

TELL US – THOUGHTS ON THE LATEST RHOC EPISODE? DO YOU THINK STEVE IS WITH VICKI BECAUSE OF HER MONEY? IS GINA MAKING THE RIGHT CHOICE TO DIVORCE HER HUSBAND?