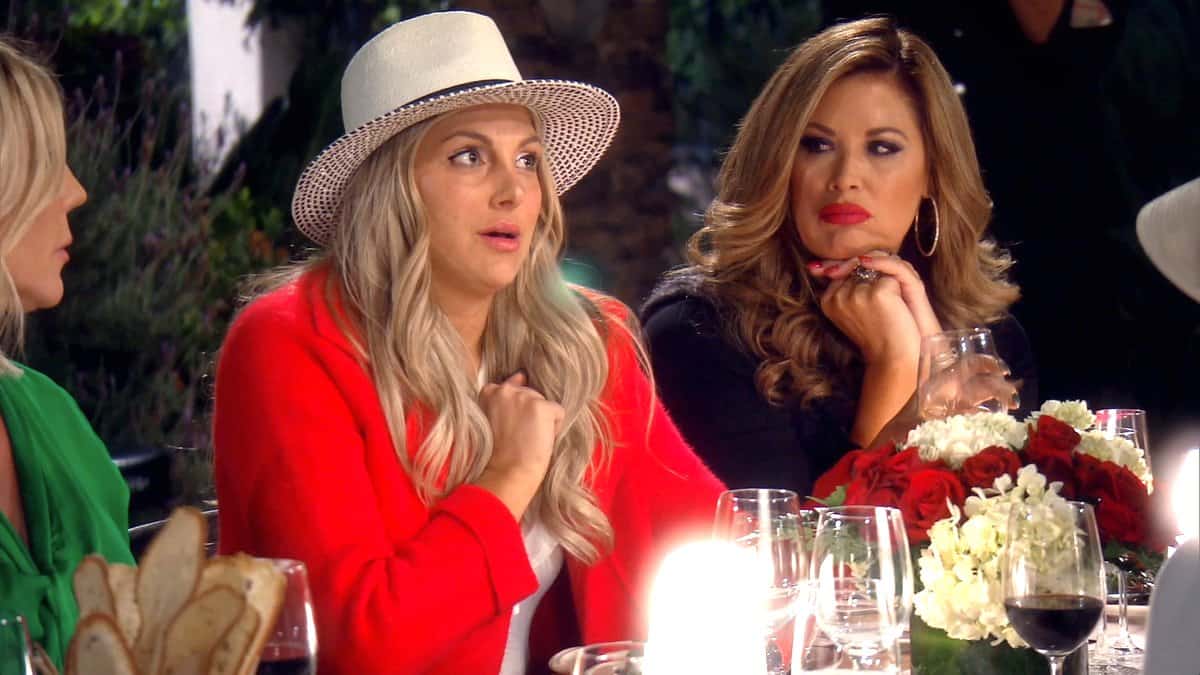 On this episode of the Real Housewives of Orange County, it is confirmed. None of these women have ever heard the phrase, “Mind your own business.”

Enter Tamra and Kelly. The girls are at the doctor and Tamra is about to get an update on her foot injury. Tamra explains that the boot is horrible and that “when this boot comes off… Eddie and I are gonna be banging like monkeys.” TMI, much? As they sit in the waiting room, Kelly shares that she has made up with Emily, but Kelly still does not like the way Emily’s husband spoke to her. I mean, Kelly’s initial beef was with Steve, Vicki’s boyfriend. Emily’s hubby, Shane, simply inserted himself into an argument that was not meant to be fought by him and Kelly is still left with unanswered questions for Steve, since he ran away once confronted.

Evidently, Kelly feels as though this reason allows her to spill dirt on Vicki. “Last year, Steve dumped Vicki…and how she got him back, I have no idea.” Wait, what? Kelly is outing Vicki’s sweetie left and right and claims that Vicki’s house “is like a revolving door of men.” That’s an interesting statement considering Kelly’s current state with men. I mean, Kelly sweats Tamra’s doctor because he is a man and has a pulse, but judge away on everybody else!

Gina and her maniacal children head out to chill with Emily and her misbehaved brood. The crew goes on some bizarro farm excursion with their kids, yet somehow Emily and Gina manage to get some sh*t talking in. Gina reflects on her “opinions” and how they got her in trouble with Shannon. According to Gina, “Shannon is like a polar vortex” (WTF) . Also. How is Emily strawberry picking mid-afternoon when she is a LAWYER and a PARTY PLANNER? I need some answers.

Is it me or does Vicki’s face look extra lifted and unnatural during the segment where she is wine tasting with Tamra? Vicki has decided to host an Italian night and she invites Tamra to help her do some recon to pick wine for the party. The ladies use this opportunity to catch up on things…like relationships. Vicki works way too hard to convince Tamra that her relationship with Steve is perfect, but eventually admits that she feels “like I am overly loving on him.” Uh-oh. Trouble in paradise? Tamra shares that Kelly divulged some 411 regarding Vicki’s relationship with Steve and now it seems as though Vicki and Kelly are playing the old tit for tat game. Because that’s mature. These ladies…

Gina and Kelly meet up together to run some stairs, Rocky style. The ladies don’t really take the workout to the proper level since they begin chatting about Gina’s imminent divorce. No one can seem to comprehend how and why this couple is calling it quits, considering Gina continues to call her hubby her bestie. Gina states that a lot of the problems stemmed from the fact that she married young and the move to California opened up her eyes. Who knows? But I think it’s time for everyone to just mind their own business when it comes to this situation.

It’s Italian night! Vicki has opened her house up for a cooking party, hosted by her old pal, Domenico. It appears as though Vicki wants to make-out with this guy, but she doesn’t get too carried away because, ya know, Steve. As Vicki does her best to fight off Domenico’s advances, the other women prep for the party. Emily kisses her troll of a husband goodbye, but Shane laments the fact that he cannot attend the Italian festivities. Clearly he is being sarcastic. Shane is even more upset upon hearing that his wife and Kelly are now cool, simply so they can avoid awkward encounters. Shane states that “the way to avoid awkwardness is not to call people names and yell.” Seems like someone isn’t letting this issue go. He also insists that Kelly give him an apology. In person. This leaves Emily nervous because let’s be real, Kelly is a scary chick.

Tamra and Emily are the first to arrive, followed by Gina, who is trying her very best to be in an Italian ensemble. Vicki and Domenico are outwardly flirting and the women are getting excited about a night of food, fun, and wine. Right off the bat, Emily pulls Kelly aside and asks that Kelly come to her house to apologize to Shane. Kelly, shockingly, agrees and doesn’t even put up a fight. Who is this Kelly and what happened to the bad a*s version that I know and love?!

Listening to Gina talk about Italian food makes me cringe, but not nearly as much as I do when I watch these girls “attempt to cook.” They pretend to stir stuff and season dishes, but then they eventually just give up and head to the dinner table. Just when it looks like everyone is getting along and having fun, Shannon pulls Tamra aside and begins stirring the pot. The Kelly vs. Vicki pot. You know the one. Obviously, Vicki makes her way over to the “secret pow-wow” and Kelly explains that she feels “weird” about the whole Steve thing, which is why Steve is not at Vicki’s house for Italian night.
I have literally given up on these women. There’s always an issue and if there isn’t one, ya better believe that they are gonna make something INTO an issue. Poor Gina. She actually thinks this evening is really meant for fun. “I learned a lot about cooking and my heritage.” Sigh. Little does she know that the dinner table convo is about to head south and it’s going to focus around her impending divorce.

Of course Vicki begins the attack. “You’re so nonchalant about getting divorced. It bothers me.” I’m sorry. I don’t remember anyone asking you for your opinion, Vick. Gina has about had it with these nosey b*tches and I don’t blame her for reaching her boiling point. Gina emphasizes that “we are not about money” and then suddenly, just like that, Shannon feels attacked. It’s game on now. Them vs. Gina. Vicki reminds Gina she stood in front of God and said vows and to that, Gina responds, “I don’t even believe in God. I believe in a higher power.” If you listen realllllllly carefully, you can hear tires schreeching in the background of this scene. The women seem to be appalled by Gina’s statement, considering they have all seemed to have found God of recent. Vicki crosses the line when she tells Gina, “You don’t have a moral compass inside your soul.” To be honest, I am impressed that Gina stays at the table for as long as she does (let’s be honest, if these women really cooked that dinner, she would have gotten up a long time ago).

Vicki plays dumb when Gina storms away and can’t imagine why the girl is emotional. As the women contemplate why Gina is upset, Tamra finally jumps in and states, “I would have to say that it’s none of our business.” And I would have to agree. Luckily, Emily, the divorce attorney, checks in on a tearful Gina. Emily gives her a pep talk and Gina returns to the table. Vicki shrieks, “We’ve had dinner served and you never came!” Vicki, you are the absolute worst. Stop interjecting and hurting Gina with your “personal stories” and start being a good person, something that would come easy if you were as religious as you claim to be.

The next day, it’s time for Kelly to bite the bullet and apologize to Shane, Emily’s husband. According to Emily, “Kelly has a quick fuse and Shane is snarcastic” so this should turn out interesting. Kelly rolls up with a smile, a gift, and her daughter, Jolie. When it comes time to talk about the issue, Kelly explains that she is “sensitive” since going through her divorce and was “on the edge” upon seeing Steve. It happened so fast for Kelly and she said she saw red when Shane called her “drunk” and she just let loose on him. The apology is forced and awkward and Shane doesn’t ease up on his sarcasm. I have to be honest, it’s kinda nice to see Kelly squirming for once. One point for Shane.